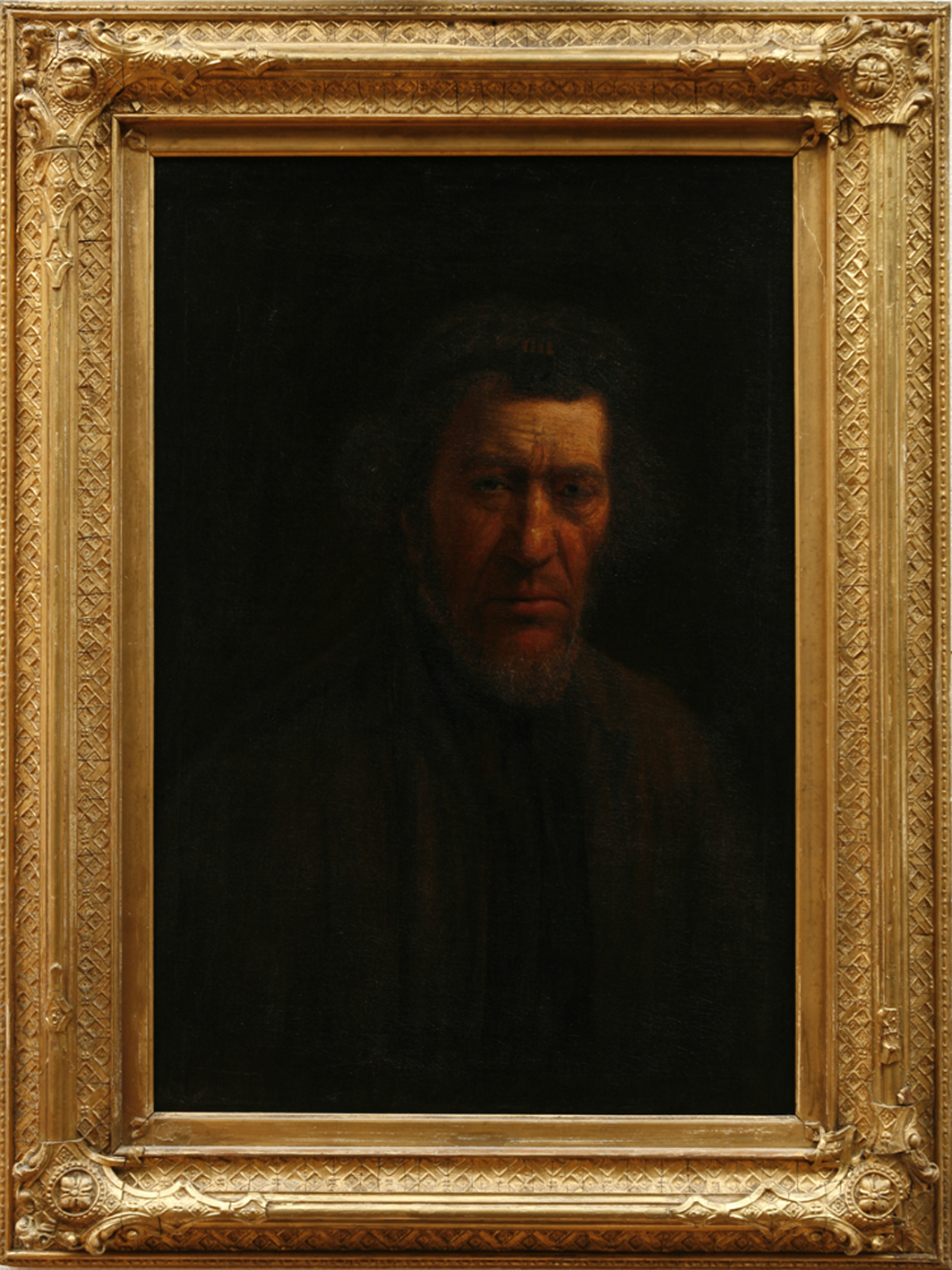 This year Penlee House Gallery & Museum in Penzance purchased a portrait of an elder from the Penzance Jewish Community by John Opie (1761–1807), A Portrait of an Old Jew from c.1779 from a private collection. Painted in the style of Rembrandt, an artist whom Opie admired, the portrait stares directly at us out of the shadows. Just discernible on his forehead is the Tefillin, a box containing four scrolls inscribed with words from the Torah, the Jewish holy book. This detail shows that the subject was undoubtedly an important person in the Jewish community at that time. For many years the painting hung in the dining room at Enys House in Penryn, Cornwall, having been given to the family by the artist. It was acquired by the owner from the sale of the Enys Estate at Bonhams in 2004.

John Opie was born near St Agnes on the north coast of Cornwall. His father was a house carpenter and wheelwright and John Opie would have followed his father’s trade had he not shown a prodigious talent for drawing. From a young age he was painting portraits of friends and neighbours and even taking commissions.

In 1772, aged around 11 years old, he met John Wolcot, a Truro doctor. Wolcot, who wrote under the pseudonym ‘Peter Pinder’, was a satirist, poet and amateur artist who had artist friends in London, including Sir Joshua Reynolds. Wolcot recognised Opie’s talent and encouraged him to paint, buying art materials and eventually giving him free tuition and accommodation at his home in Truro. Wolcot acted as Opie’s agent, procuring commissions and taking part of the fee. Wolcot’s plan, eventually, was to introduce Opie to London society once he came of age.

In late 1779, Wolcot and Opie moved to Helston. As well as painting portraits of local notables, Opie was also becoming known for his ‘character pieces’. It was around this time that he painted A Portrait of an Old Jew. It is likely that this portrait, thought to be of the Penzance Rabbi Abraham Hart (Solomon Lazarus), was painted as a character piece, rather than a commissioned portrait. Connections between Opie and Abraham Hart have been documented by Keith Pearce in his book, The Jews of Cornwall (Halsgrove, 2014). The Rogers family of Helston, who had sat for several portraits by Opie, leased land to the Jews for their cemetery in Penzance. At this time, Opie produced a number of character paintings of Penzance people, including the last native Cornish speaker, Dolly Pentreath. Abraham Hart died in 1784, so it is possible that he is the elderly subject of this portrait. 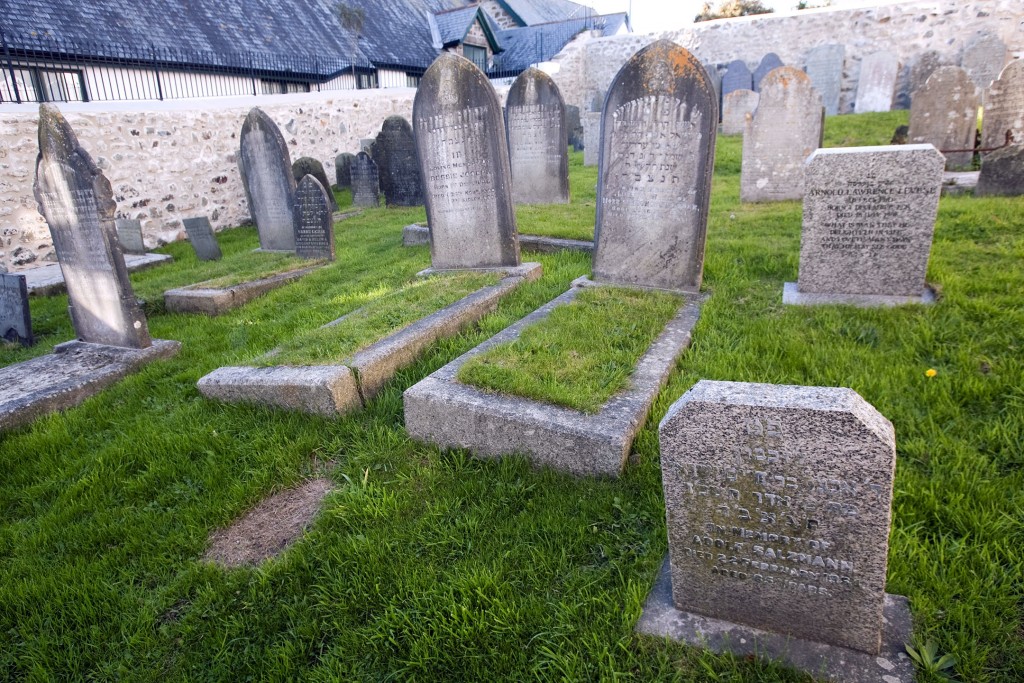 Miraculously, the Penzance Jewish Cemetery is preserved to this day. Though not all the graves are marked, it is likely that Abraham Hart was buried here. Jews first came to Penzance from the Rhineland area of Germany and from Holland in the early 18th century and the earliest graves date from this period. As the population of Penzance increased, dwellings and a school were built around the Cemetery walls. In 2004, it was awarded Grade II Listed status by English Heritage. The site is remarkably well preserved and its Bet Tohorah, or ritual cleansing area, deemed to be of outstanding historical significance.

In 1781, Opie took A Portrait of an Old Jew and three other portraits to London, accompanied by Wolcot. He received an early commission from King George III to paint Mary Granville, Mrs Delany. The success of this portrait (Queen Charlotte apparently hung it in her bedroom) led to an audience with the King in 1782, lasting nearly an hour and a half. Opie brought along his four portraits, including A Portrait of an Old Jew and the King purchased A Beggar and his Dog, which he wanted in addition to Mrs Delany. This Royal patronage led to further commissions and launched Opie’s career, earning him the title, ‘The Cornish Wonder’. As well as a successful painter of portraits and history paintings, he taught at the Royal Academy School and was buried in St Paul’s Cathedral. His friend, Sir Joshua Reynolds, described him “Like Caravaggio, but finer.”

The picture now has a permanent place at Penlee in the local history gallery, close to the portrait of Rabbi Barnet Asher Simmons by Robert Pentreath, painted in 1832.  The Penzance Jewish community declined in the 19th century as more families left for the industrial cities in the North and the market for tin and copper fell, affecting the town’s prosperity. The Penzance Jewish Cemetery remains as evidence of a once thriving community. It can be visited by appointment by contacting the Gallery. Penlee House Gallery & Museum is open all year round, from Monday to Saturday. The painting was purchased with the assistance of The Art Fund, the V&A/ACE Purchase Grant Fund, The Friends of Penlee House and numerous private donations.