You are here: Home News Depicting Dress. A professional workshop on male and female dress in eighteenth-century portraits by Veronica Isaac

Depicting Dress. A professional workshop on male and female dress in eighteenth-century portraits by Veronica Isaac 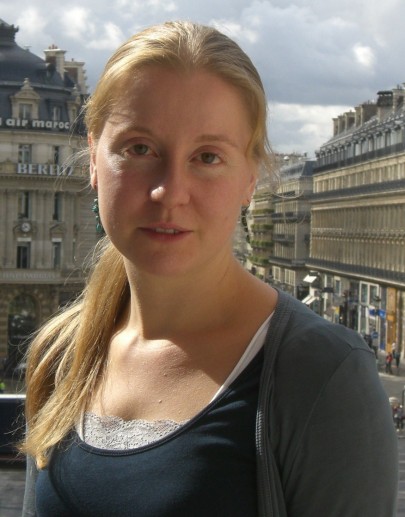 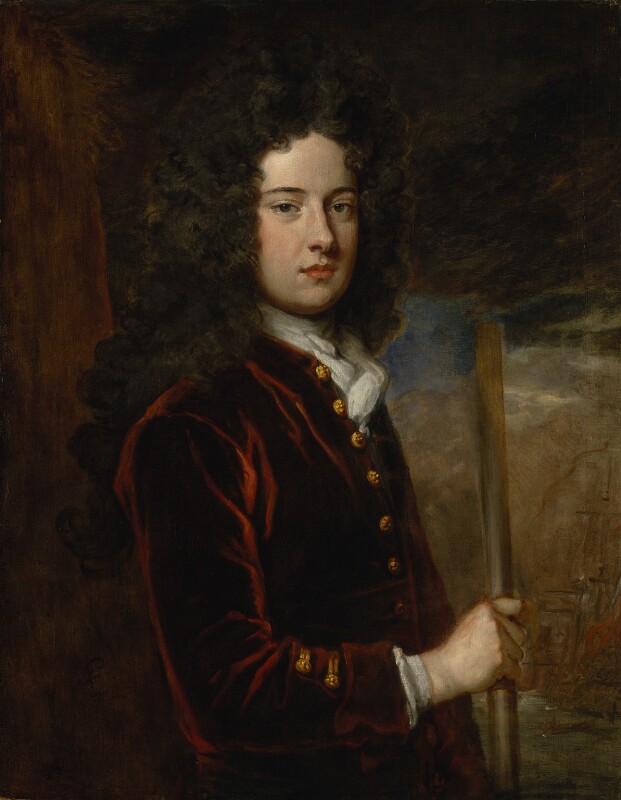 James Berkeley, 3rd Earl of Berkeley by Sir Godfrey Kneller, Bt., oil on canvas, c.1710 © National Portrait Gallery, London. Berkeley appears to be wearing a deep rust red silk velvet coat with a linen stock at his throat. The cuff of his linen shirt is just visible, emerging from the end of his coat sleeve.

This collaborative workshop between the Understanding British Portraits professional network and the School of Historical Dress was led by two of the School’s teachers, Professor Jenny Tiramani and Vanessa Hopkins and took place their newly opened headquarters in Lambeth.

The day commenced in the extremely well-stocked library, where Jenny and Vanessa provided a brief introduction to the school and its founding purpose: to collect and promote knowledge about ‘Anything anyone ever wore, anywhere.’

Turning to the focus of the workshop, Jenny then touched upon the contrasting and shared challenges which dress and portraiture present as objects for research. Discussing portraits from within our collections, we considered the difficulties faced when analysing any artistic representation of dress. As delegates observed, there is always the chance that an artist may have altered a garment to achieve a specific effect or colour balance, or even to flatter the wearer. Furthermore, whilst there have been instances, such as the 2012 Impressionism and Fashion exhibition at the Musée d’Orsay and In Fine Style: The Art of Tudor and Stuart Fashion where it is has proved possible to link surviving garments and accessories to paintings, this is rare.

Drawing on her own experience, Jenny advised us to adopt a four stage process when examining dress in portraiture. This is shaped around what she termed ‘the four elements of dress’:

With this framework to guide us, the focus then shifted to a specific element of the dress and accessories depicted in portraiture: the fabric. This proved an unexpectedly complex theme for discussion. As delegates learned, an 18th century dress will be made from and dyed with natural fibres and dyestuffs (with either an animal or plant origin). It is not simply a case of identifying whether the fabrics depicted might made from silk, wool, cotton or linen, however, but also of understanding the impact the ‘weave’ can have upon the finish of the fabric. 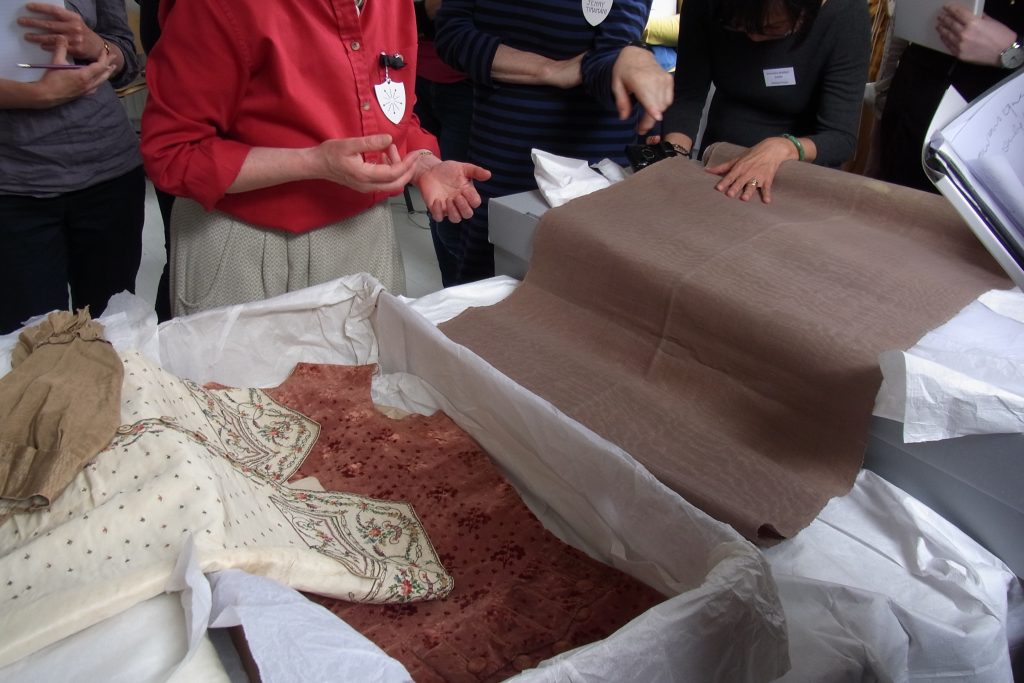 A selection of waistcoats from the teaching collection, all constructed from contrasting fabrics

Perhaps anticipating the panic this new information provoked, Jenny and Vanessa chose this moment to take us to the workshop downstairs. Here delegates were shown, and allowed to handle, examples of dress from the school’s teaching collection. Working directly with surviving garments made apparent both the texture and weight of different fabrics, and the extent to which the final appearance of fibres like silk and wool was dictated by how they were woven. As Jenny stressed, it is the weight and finish of fabrics which determines the way they fall on the body and also how they respond to light – both routes through which you can begin to identify the fabrics depicted in paintings. 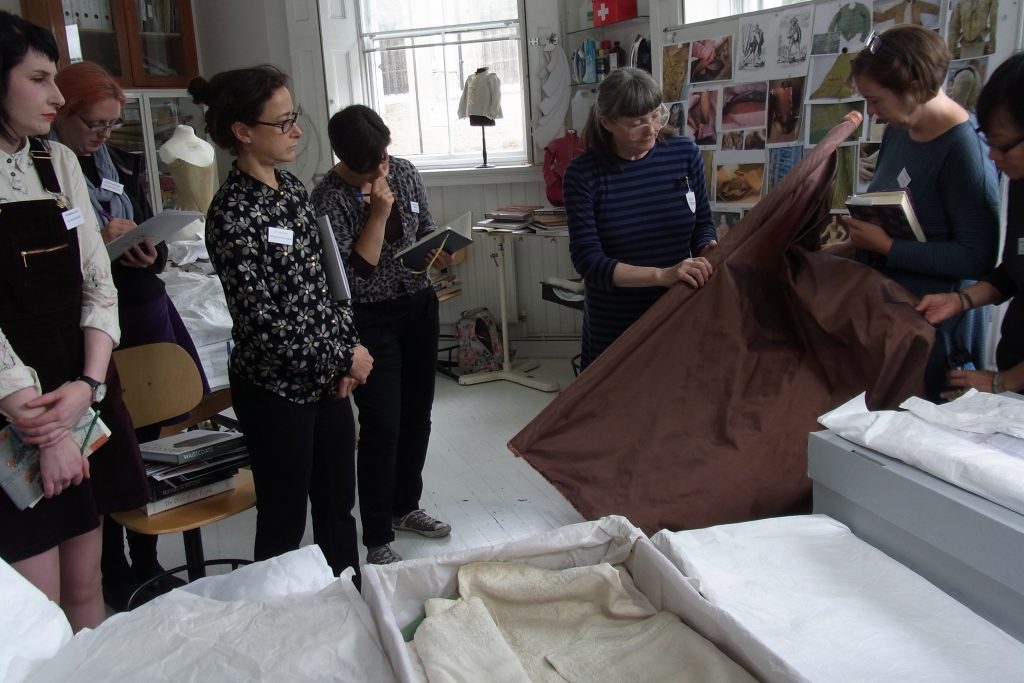 Jenny Tiramani illustrating the weight and ‘fall’ of silk, with the resultant shadows and stiff creases

After a lunchbreak, (which not only provided welcome sustenance, but also a chance to meet other delegates and learn more about their collections), the afternoon session began. The first activity built on the earlier discussion of fabrics, and, with Jenny’s guidance we compiled our own booklets of fabric samples from the four key groups used in the 18th century: silk, wool, linen and cotton. The samples in these booklets gave delegates a concrete illustration of the impact weave has on the finish of fabric and will provide a key reference point in the future. 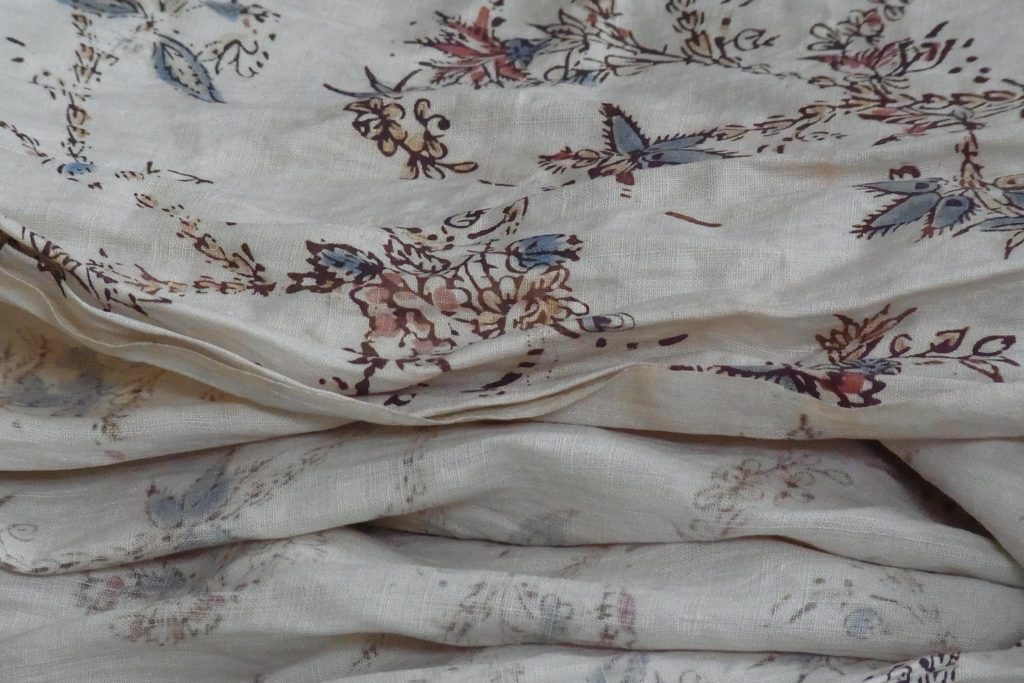 A detail from a printed cotton dress, c.1775-1795, part of the school’s teaching collection

Having begun to grasp the concept of weave and fabric type, the focus shifted back to garments. Through a practical demonstration and work with further examples from the teaching collection, we also discussed the ‘hidden elements of dress’- specifically the numerous layers of clothing both men and women are actually wearing in portraits. As we learned, these petticoats, pads, panniers and stays, provided vital support for the outer layers of clothing, and help to mould the body into the fashionable silhouette.

With so much to fit in, it’s perhaps not surprising that there wasn’t time for the demonstration of how 18th century fabrics appear by candlelight (though Jenny had the beeswax candle on standby). The day rounded off instead with an unexpected visit to a neighbouring private collection, where delegates had an opportunity to put the skills they had learned into practice and to examine portraits from the period at first hand. Challenged to identify fabric types and garments, we were able to draw on what we had learned and seen earlier in the day. We even discovered one portrait which provided concrete examples of the ‘layering’ we had discussed and in which the sitter – a particularly fashionable young man – appeared to be wearing two waistcoats (purely for decorative effective, rather than warmth)! 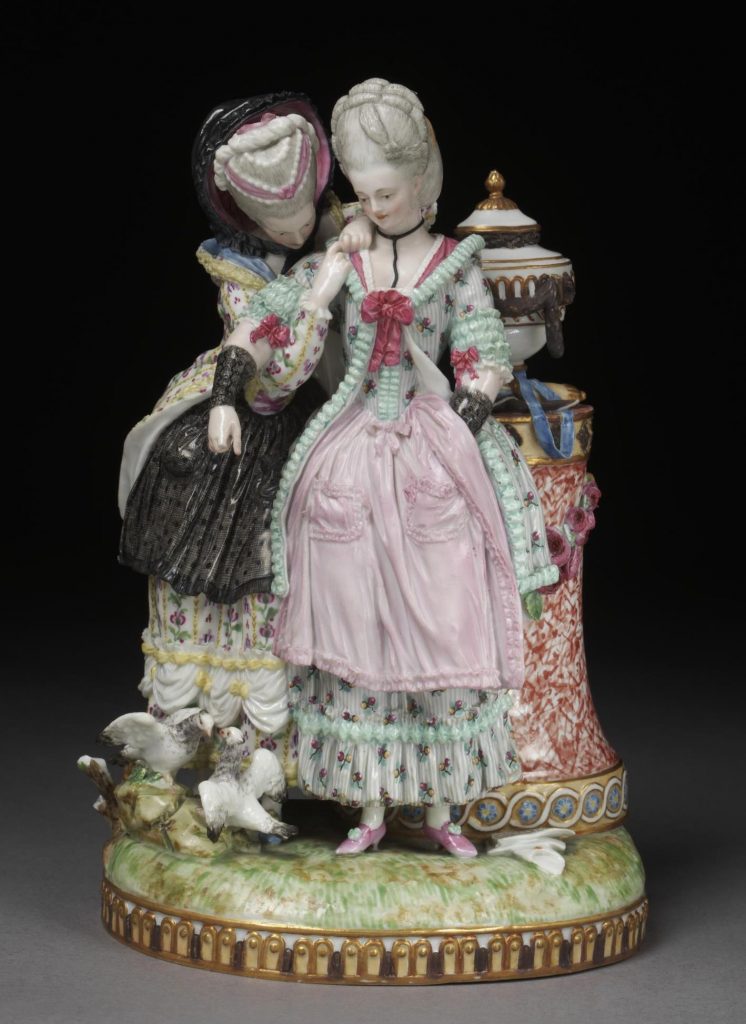 M.V.Acier, Figure group of ‘The Young Bride’, hard-paste porcelain painted in enamels and gilt, 1774-75, made by Meissen porcelain factory, Victoria and Albert Museum. As Jenny showed us, Meissen pottery figurines often offer a good examples of the ‘layers’ of clothing worn during the period. with the ‘stays’ worn visible and worn on the outside.

This workshop provided an important and fresh perspective on portraiture and dress. It brought together academics and curators with a range of different expertise and backgrounds and offered a valuable networking opportunity, in addition to a fascinating learning experience.

Whilst stressing the complexity of dress and fabrics the teachers were able to make this daunting topic accessible and to explore methodological approaches and source material through which delegates could begin to address these challenges.

The insights this workshop offered into fabrics and garments from the 18th century will enable delegates to make informed deductions about the dress depicted in paintings, and potential dates and to support such conclusions with an understanding of ‘content’, ‘cut’ and ‘context’. 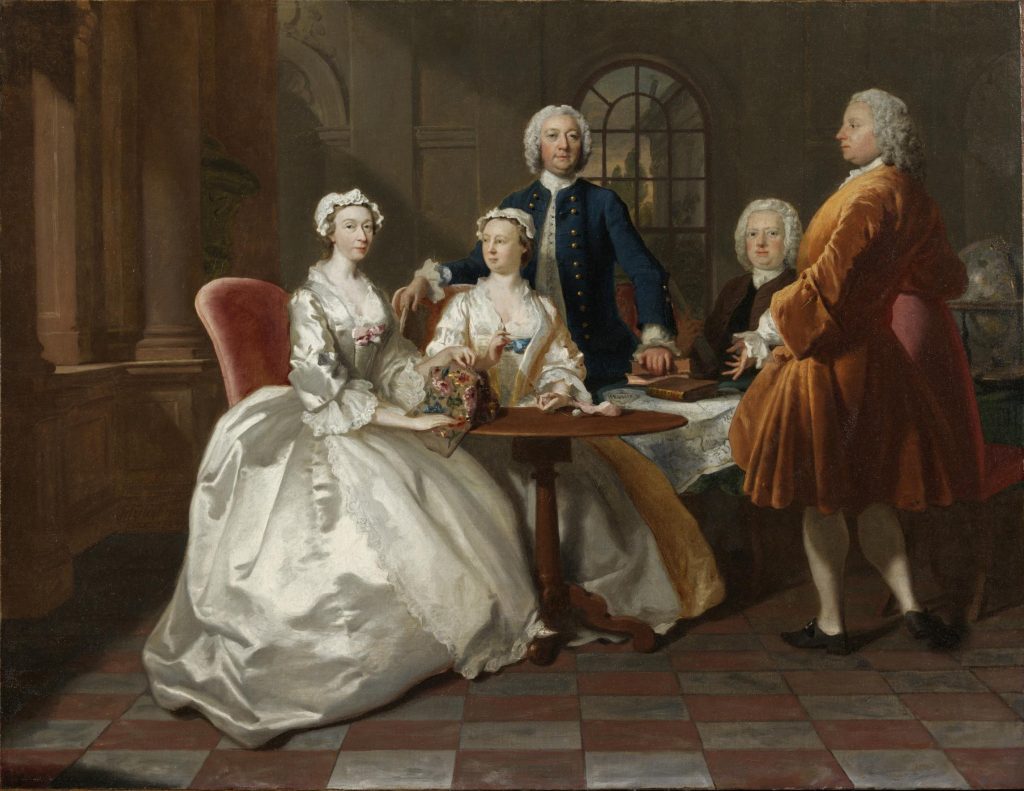 Joseph Highmore, Conversation piece, including Jane Vigor with family and friends (Joseph Vigor, Ann Vigor, William Vigor and probably John Penn), oil painting, c.1744, Victoria and Albert Museum. A painting illustrated the range of fabrics used during the period. In this instance the women are dressed in silk satin and lace, and the men are wearing full skirted coats made from silk velvet and wool.