You are here: Home News From the Queen’s Bodyguard and medical luminaries to humble domestic servants – portraiture in Edinburgh and Erddig by Susanne Gronnow 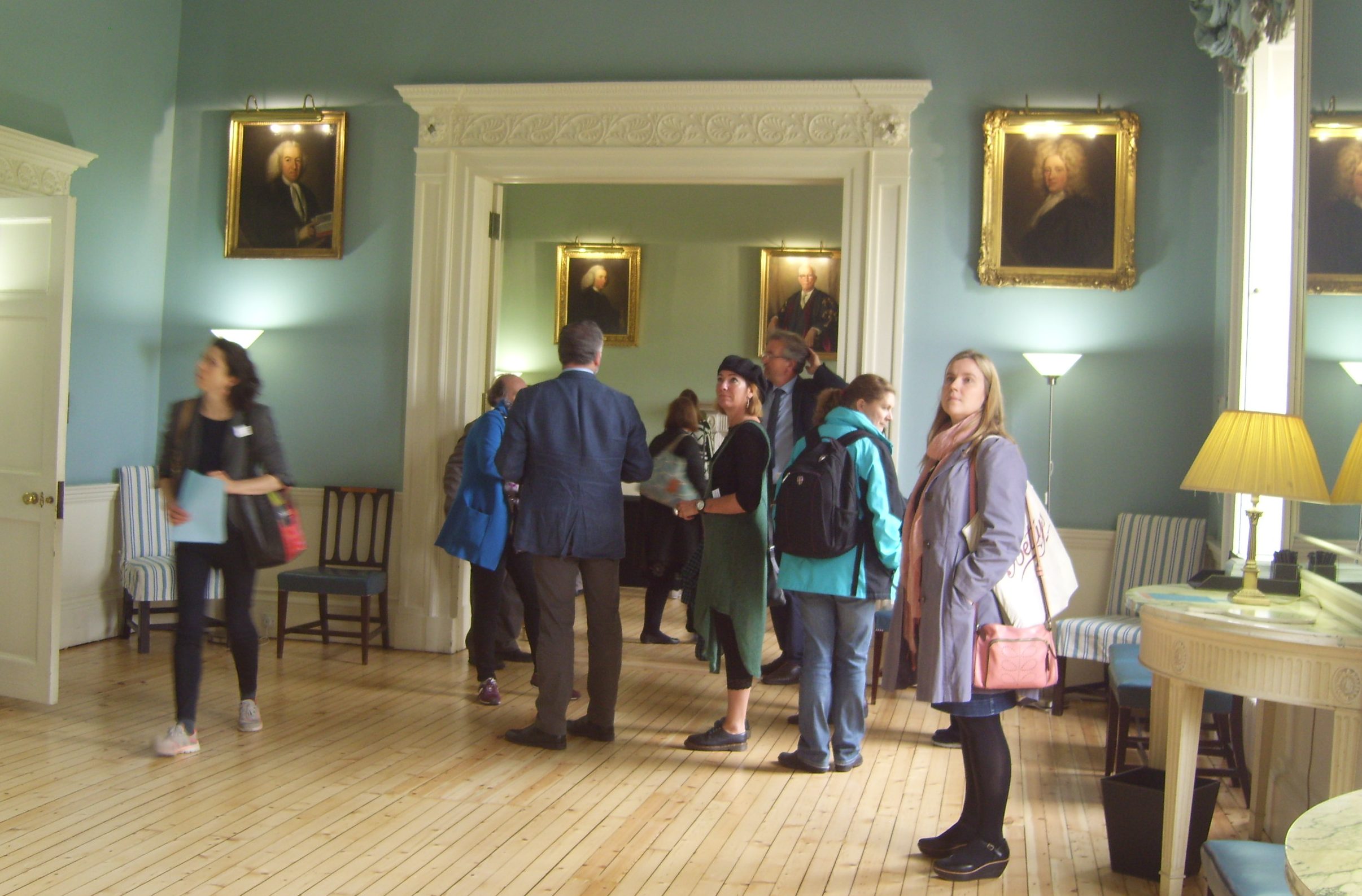 Members of the 'Understanding British Portraits' network at the Royal College of Physicians in Edinburgh, part of the Portrait Collections in Edinburgh event 18 September 2015

Reflecting on the event, there seemed to be some common themes that were raised at each collection and each venue we visited: the question of male and female gender representation in collections be it as sitters or artists; the notion of conflict that is sometimes reflected in the display of portraits (or lack of it); and the accessibility of collections through physical and online access. Judging by some of the institutions that the group visited, such as the Royal College of Physicians of Edinburgh (RCPE) and the Royal Company of Archers, perhaps it is unsurprising that the number of women sitters, or women artists, in the historic collections was so few.

All of the above common themes have made me reflect on the collection I care for at Erddig in north Wales. Erddig is unique, in that for nearly two hundred years, much-loved servants were recorded in portraits, photographs and verses. Nothing of such breadth and complexity survives anywhere else in the world (1).

The portraits were commissioned by the Yorke family, an unambitious gentry family, who had rather fortuitously inherited Erddig from a childless, rich uncle called John Meller (d.1733). The tradition of recording servants was started in 1791 by Philip Yorke I (1743-1804) who commissioned a set of six portraits from John Walters of Denbigh (1721-97). Out of the six portraits, only one is of a woman, Jane Ebbrell, housemaid and spider-brusher. 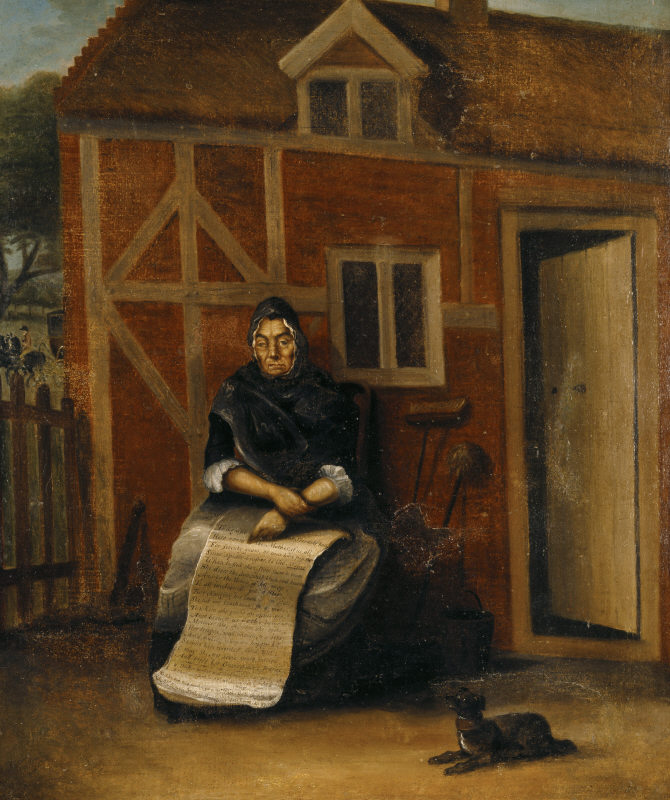 Jane Ebbrell had originally worked for rich Uncle John Meller; in fact she was one of the staff Meller brought from his London house in Bloomsbury Square when he first acquired Erddig earlier in the 18th century.

Philip I also initiated the custom of writing doggerel verse about each servant that was later published as Crude Ditties following completion of the paintings. The verses are charming, light-hearted and full of affection for Erddig’s loyal servants; Jane Ebbrell referred to as ‘the Mother of us all’ whose enthusiasm for cleaning is recorded by her Master: ‘from room to room/She drove the dust, with brush and broom/And by the Virtues of her mop/To all uncleanness put a stop’.

The other five male servant sitters are: Jack Henshaw, gamekeeper; Jack Nicholas, kitchen man; William Williams, blacksmith; Thomas Jones, butcher and publican; and Edward Prince, carpenter (below). The portraits of Henshaw and Nicholas were commissioned first, they are both dated 1791; Prince’s portrait was completed in 1792; Ebbrell’s and Williams portraits are dated 1792; with Jones portrait completed in 1796. It is unclear why the portraits were commissioned in that order. The portraits were commissioned by Philip I so presumably he decided the order in which they were to be completed. Most of the servant sitters were in their 70s or 80s when they were painted and the portraits and their verses celebrate loyalty, length of service and hard work. Philip I was a keen historian, a Fellow of the Society of Antiquaries, and in 1799 he published The Royal Tribes of Wales, an account of the ancient ruling families of Wales. The vast Erddig archive is kept at Flintshire Records Office and perhaps it would be opportune to revisit Philip I’s letters and review why he began the tradition of recording his servants. 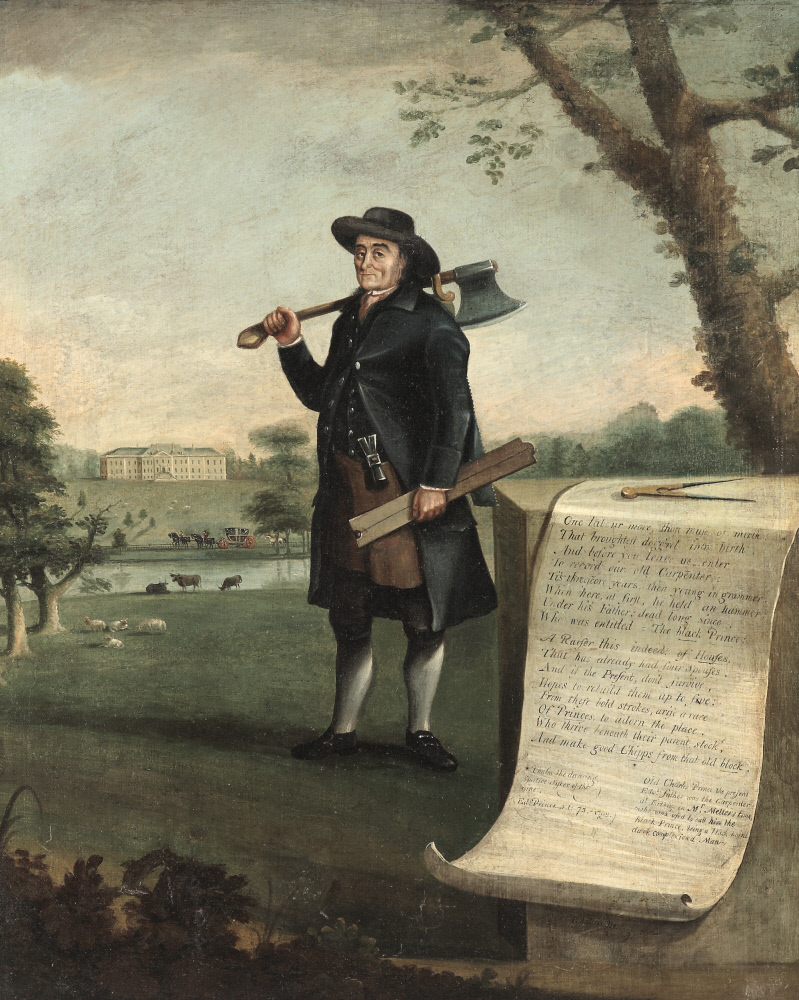 We can only surmise what the servant sitters made of their portraits. The portraits have always been displayed in the Servants Hall at Erddig, the ‘old guard’ watching over subsequent generations of Erddig servants; presumably as a reminder of standards, values and expectations of the master. At the RCPE, Sibbald Librarian Iain Milne revealed that much of the portrait collection had been given by descendants of the sitters; and that doctors used the prints of themselves almost as calling cards. The College commissioned Presidential portraits (in oil and print) before moving on to photographic portraits in the 19th century; because, as Milne explained, doctors are quick to embrace new technology. And at RCPE it has not been unheard of for portraits to be rejected by the sitter, or their nearest and dearest, if they don’t like what has been produced. If this is the case, the portraits do not get displayed and languish in store. But the Erddig servants had no such choice.

Philip I’s son, Simon (1771-1834), continued the portraiture custom. In 1830, Simon commissioned three servants portraits from William Jones who had trained at the Royal Academy School; on this occasion, only male servants were selected, a gardener, a woodman, and a carpenter.

Philip I’s grandson, another Simon (1811-94), commissioned two hatchments commemorating male staff, and also the first photographic image of the Erddig servants; a daguerreotype dated 1852 (below) is the first image of the Erddig servants that starts to reflect the number and diversity of the staff; male and female staff are equally represented and the image reflects the community effort in sustaining a country house – with the west front of Erddig nestling behind the group. 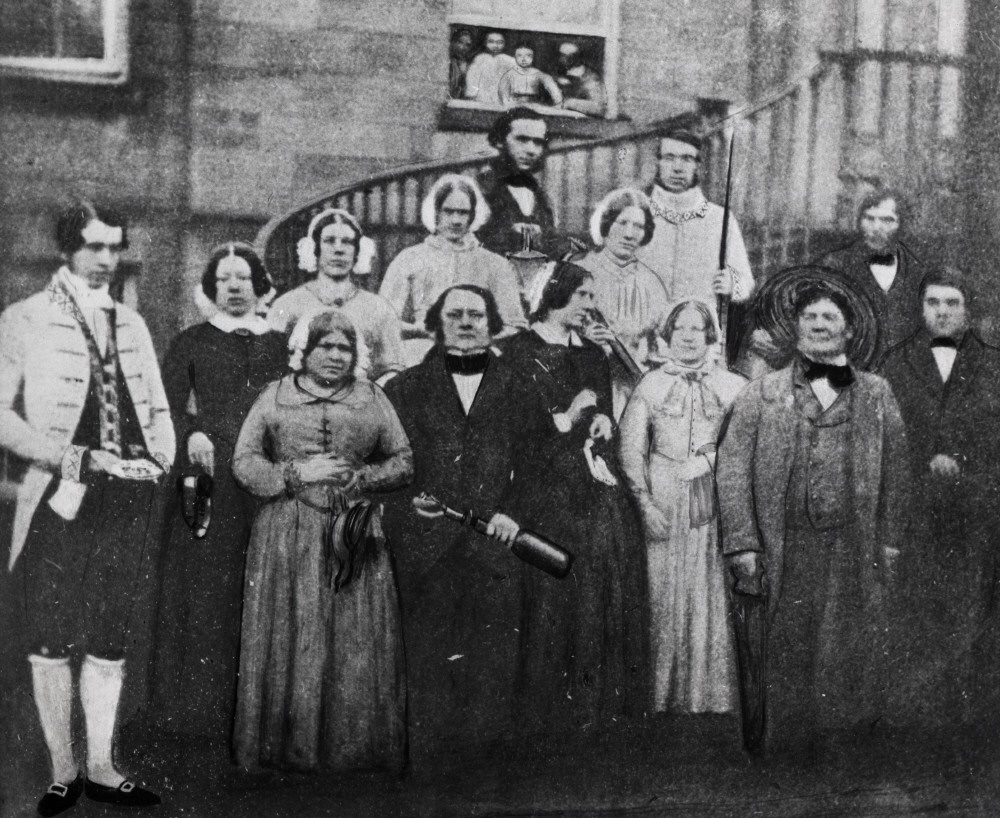 And Philip I’s great-grandson, also called Philip (1849-1922), commissioned another set of servants portraits; this time all photographs, again with verses alongside, and with a mixture of group portraits or single-sitter portraits; and interestingly, at least six of the portraits are single-sitter portraits profiling female servants and representing a range of roles and responsibilities within the household. By the time the Edwardian era had drawn to a close, Erddig female servants had, in portraiture at least, parity with their male counterparts.

Accessibility of collections particularly through online access and academic study was another theme of the Edinburgh event. Iain Milne at RCPE told us about the Cullen Project which is an online project to digitise copies of the consultation letters of Dr William Cullen (1710-90) who became the most influential medical physician of his generation. Through collaboration with the University of Glasgow the project makes available Cullen’s private consultation letters, revealing the types of complaints about which 18th century sufferers wrote to Cullen. So far, 20,678 pages have been digitised. The RCPE also has a sculpture collection of 19th century works depicting significant figures in medical history; a full catalogue with photographs is available online here.

The NT has recently updated its online collections website and features nearly one million records accessible to the public. These records are constantly being added to, updated and refined. At Erddig, we are fortunate to have a volunteer who has taken a very keen academic interest in the Erddig print collection over the last few years. John Cooper-Poole has written A little Companion to the Prints at Erddig; the hand-bound book details an overview of print making processes, giving historical context before concentrating on the Erddig print collection. The collection contains some 478 items; 128 of these are framed and on display in the house and 350 are in store, of which 121 are framed (2). John Cooper-Poole is researching the collection and, as a minimum, he is trying to attribute an artist and engraver to each print title. This information has recently been added to the print collection entries on the Erddig catalogue and is available at www.nationaltrustcollections.org.uk.

Portrait collections in Edinburgh event allowed delegates to scratch the surface of the wonderful collections in the city, and have physical access to some collections normally reserved for private patrons.

Notes:
(1.)    Giles Waterford. The World of Interiors November 2003
(2.)    John Cooper-Poole A little Companion to the Prints at Erddig