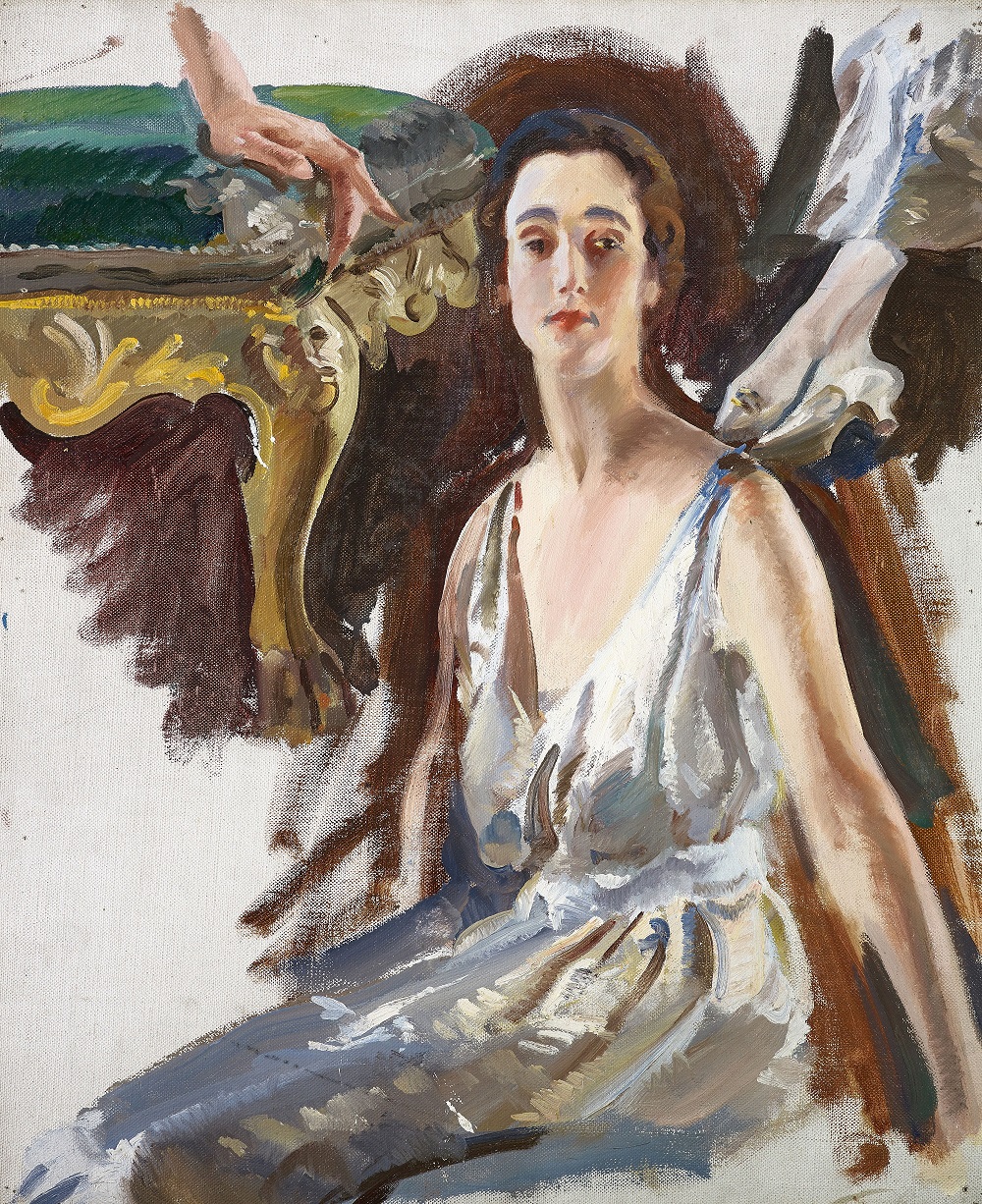 A glamorous portrait of one of Cheshire’s most interesting 20th-century aristocrats has gone on display at Chester’s Grosvenor Museum. The portrait of Sybil, Countess of Rocksavage, later Marchioness of Cholmondeley, was painted by Charles Sims in 1922. The painting was purchased with support from the ACE/V&A Purchase Grant Fund, Philip Mould, Art Fund, and the Grosvenor Museum Society.

Sybil was born in 1894, the daughter of Sir Edward and Lady Sassoon. She became Countess of Rocksavage on her marriage in 1913 to George Cholmondeley, Earl of Rocksavage, eldest son and heir of the 4th Marquess of Cholmondeley. They had three children:  George, who became 6th Marquess, a daughter, and another son. The present Marquess of Cholmondeley is her grandson. In 1917, during the First World War, the Women’s Royal Navy Service (WRNS) was formed due to Sybil’s influence with the Prime Minister, and she became its Assistant Principal.

Sybil was a lady of striking beauty and intelligence, strong-minded and possessed of a very considerable fortune, highly cultured and a wonderful hostess. She was an enthusiastic patron of contemporary art, and knew almost all the notable artists, politicians and sportsmen of her time.  During the Second World War she served as Superintendent of the WRNS from 1939-1946. Sybil was awarded the CBE in 1946, and established the Cholmondeley Prize for poetry in 1966. She was widowed in 1968, and was awarded the Légion d’Honneur in 1984. Sybil died at the age of 95 in 1989.

The artist Charles Sims (1873-1928) was born in London, and studied there and in Paris. His continental training probably accounts for his fluent handling of paint and his confident treatment of space and atmosphere. His work ranges from early outdoor figure scenes painted with a light, fluent touch, to formal portraits, and paintings in which he adopted a symbolist or primitive style.

Councillor Louise Gittins, Cheshire West and Chester Council’s Cabinet Member for Communities and Wellbeing, said: “This painting is a study in oil on canvas for ‘The Countess of Rocksavage and her Son’ by Charles Sims. The finished portrait was exhibited at the Royal Academy’s Summer Exhibition in 1922, where it was exceptionally well received, and hangs today in Cholmondeley Castle. Our painting was purchased with assistance from the ACE/V&A Purchase Grant Fund, Philip Mould, Art Fund, and the Grosvenor Museum Society:  we are enormously grateful for their generous support.”

Hilary Banner, Chairman of the Art Fund Cheshire fundraising committee, said: “Charles Sims’s portrait of Lady Rocksavage makes a superb addition to the permanent display in the Art Gallery at the Grosvenor Museum. It directly fulfils the museum’s tightly focused collecting policy with the sitter’s Cheshire connection, depicting the chatelaine of a great estate and celebrating her artistic patronage. Portraying one of the county’s most interesting 20th-century aristocrats, it significantly strengthens the museum’s collection of portraits of Cheshire people and particularly enriches the holding of earlier 20th-century art. Art Fund is delighted to support this significant acquisition.”

Richard Hopkinson, Acting Chairman of the Grosvenor Museum Society, said: “This painting makes a major contribution to the aesthetic experience which the Art Gallery offers our visitors. Glamorous and vigorous in equal measure, the portrait of Lady Rocksavage displays tremendous confidence and freshness in the handling of the paint, provides a fascinating insight into the portraitist’s creative process, and possesses great immediacy and vitality. I am enormously pleased that the Grosvenor Museum Society has helped the museum to purchase this splendid painting.”

Posted in Collections & Acquisitions, Portrait News by author on May 14th, 2017.