You are here: Home News Restoring the Mallory family painting by Jennifer Taylor 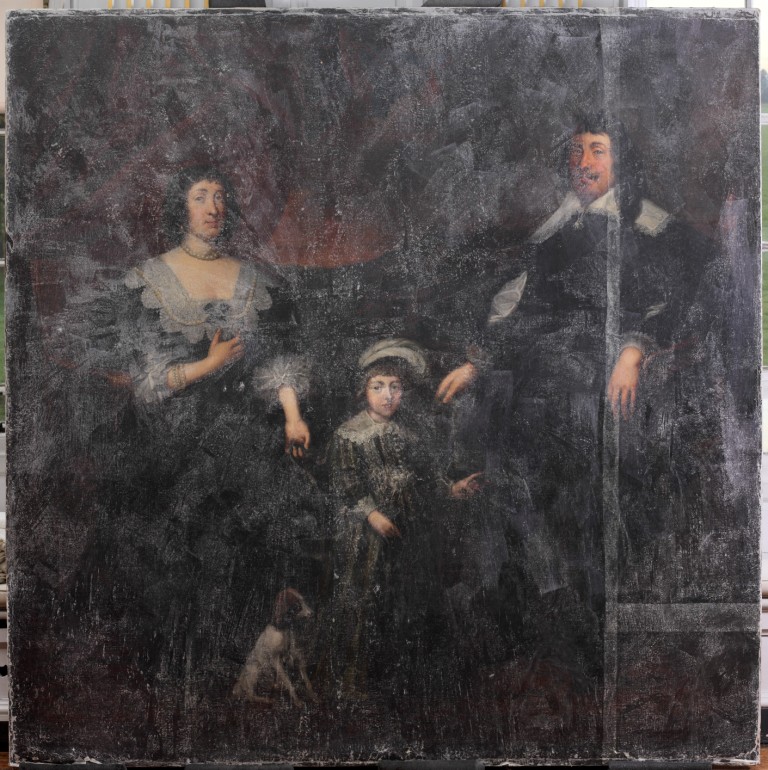 Fountains Abbey & Studley Royal in North Yorkshire is not known for its large collection of art or furniture; it’s a World Heritage Site famous for its landscaped water garden and 12th century monastic ruins. The devastating fire at Studley Royal House in 1946 had destroyed much of the contents and when the Vyner family eventually sold the estate to the West Riding County Council in 1966 nearly all of the remaining household possessions were sold off.

Uncovering the story behind the only portrait in our collection was a rare and exciting opportunity for me, which became possible largely due to the Understanding British Portraits bursary. The portrait is a family painting of one generation of the Mallorys, owners of the Studley Royal estate between 1452 and 1667. It’s currently in storage and in need of conservation and repair works before we’re able to display it to our visitors. I was tasked with finding out more about the people in the painting and putting together an engaging display/exhibition for visitors to inspire them to get behind the overall aim to conserve the portrait.

The existing research on the painting seems to conclude that the sitters are Sir John Mallory, his wife Mary and their daughter Jane, dating from the mid-17th century, artist unknown. I wanted to look into this further, to determine if the child really was Jane (he had seven children in total). Looking into the family tree, I discovered that Sir John and Mary Mallory had one son, amongst six daughters. It seemed very odd to me that they would choose to include a daughter in their family painting above their male heir. The fashions and political clues help date the painting to between 1640 and 1650, and we know that William Mallory was born in 1647, so it would seem far more plausible that the child in the painting is William, not Jane (even though the child is wearing a dress, this was common in children of a young age during this period). David Taylor, the National Trust’s Curator of Pictures and Sculpture, also helped me by clarifying that the figure of the child almost certainly represents a boy because of the collar, hat, hairstyle, dark colour of the clothes, and lack of obvious jewellery.

Sir John’s involvement in the Civil War was another area that I wanted to delve into further as part of my research. Were his motives for joining the campaign heroic, political or unwilling acceptance? Sir John Mallory was Governor of Skipton Castle and withstood a three year siege until 1645, being one of the last royalist strongholds to surrender. I visited the West Yorkshire Archives and was able to find and photograph the original Royal Warrant issued by King Charles I to Sir John Mallory, commissioning him to raise a regiment in the West Riding. Further evidence suggested he was a competent and honourable soldier. 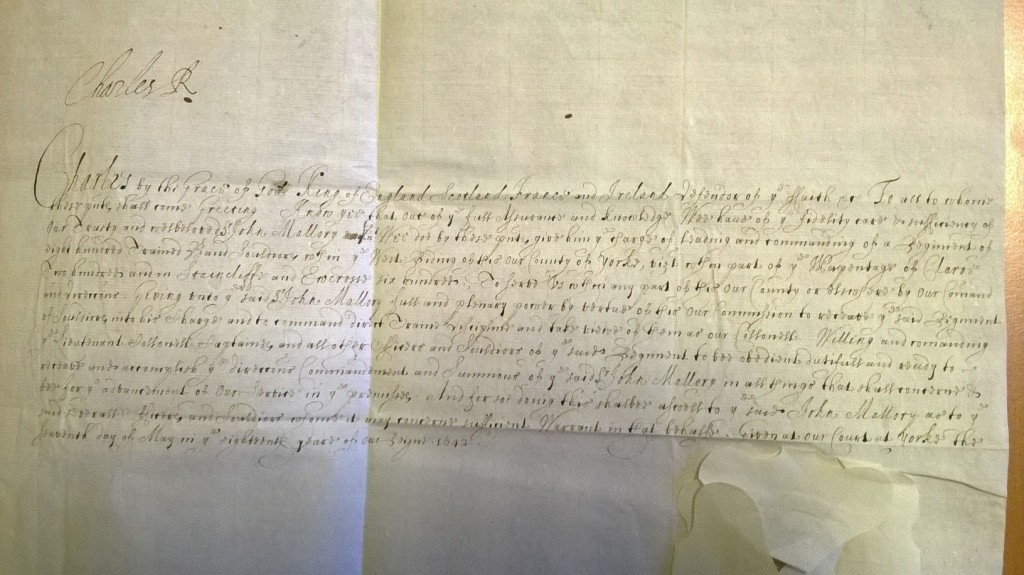 Photograph of the Royal Warrant 1642 commissioning Sir John Mallory to raise a regiment of 800 soldiers in the West Riding. West Yorkshire Archive Service.

Sebastian Fattorini at Skipton Castle was also able to provide me with the details of the terms of surrender and delivery of Skipton Castle in 1645. At the time of painting the family portrait, Sir John had recently returned home from war fighting on the losing side. He was subject to significant fines imposed by parliament which he was able to reduce by severe stretching of the truth when it came to declaring his land ownership and wealth. By 1649 he had managed to clear his debts which might suggest that the commissioning of a family painting was a statement of his return to solvency and an attempt to raise his profile in society.

As we don’t know the exact date it was commissioned, it is difficult to know what the motivations were behind the portrait. However, we can make assumptions that Sir John was still loyal to Charles I based on his Royalist clothing and hairstyle and the jewellery and clothing of his wife was that of a fashionable lady.

I’m sure that further research and conservation of the painting will help reveal more clues about the stories behind the people in the portrait.

Posted in Blog by Jennifer Taylor on May 18th, 2015. Tags: bursary, costume, portrait