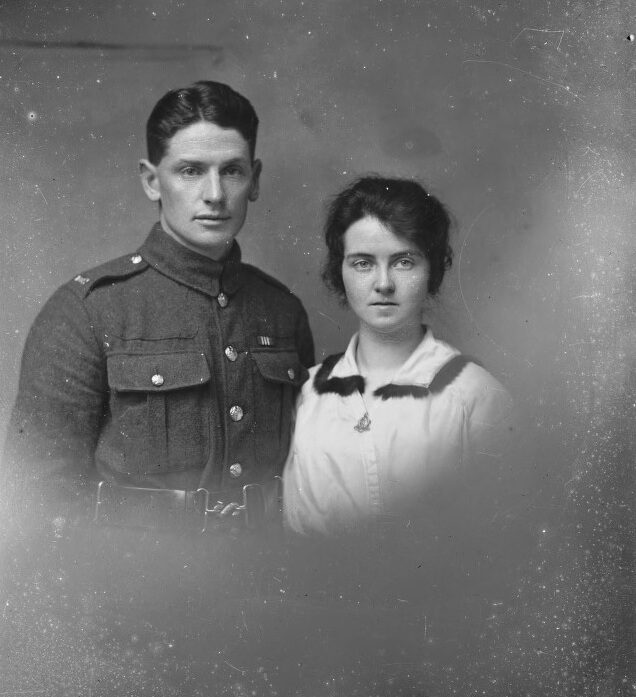 For three consecutive years I have attended the Annual Seminar to expose myself to research, ideas, movement and collections that I might otherwise not interact with. In a sense the UBP annual gathering reassures me that I am not being naive or narrow minded about what I research or curate. I always walk away with more ideas and questions about my own working practices.

As I am sure many people do, I quite naturally began to relate to each paper presented to my own research and experiences. Will Troughton, Curator at the National Library of Wales, kicked of the days discussions with an intriguing discovery – a box of photographs of unidentified soldiers by D C Harries. When Troughton started to explain that these photographs were of soldiers from Pembrokeshire and it was his ambition to try and identify the sitters, I sat up – my family are from Pembrokeshire, their names featuring on war memorials. I was engrossed as Troughton took us through a few examples of photographs which, although it seemed contained very little detail, to the trained eye could help us identify the soldiers regiment, rank and status in the war. When assessing a portrait, or in this case a crate of them, the object’s production process and the motivation behind it are of equal importance to the understanding of the portrait as the contents itself. Why were so many soldiers having their photographs taken by this photographer, and why such a prolific output? Naturally Troughton explained a multitude of reasons, war being the most prominent motivator. What struck me though was that photography had opened portraiture up to the masses – no longer were portraits produced in oils, at great expense, exclusively for aristocracy. Instead, these portraits show that the middle classes equally valued their social standing, and photography immortalised their pride in a historic moment. For me, photography is a much more personal medium as we can all relate to it, making these sitters far more real than their aristocratic, oil painted counterparts. These could be anyone’s relatives.

Whilst the delegates were caught up in the fascination with the sitter, Troughton pointed out the unusual cropping techniques used by Harries. This altered the composition and showed Harries’ artistic intentions. If we had known the sitters identity and been caught up in their biography, there is every chance Harries’ unusual techniques would have been overlooked. In my opinion, the value of these photographs is their anonymity: they open the possibility of considering other factors of the portraits, such as why these sitters descended on this photographer en mass (some more than once) and allow us to observe how a community responded to war over time. Without anonymity, no-one would probably have ever considered them in the context of a collective reading, other than the tie of being photographed by one man.

As a curator I always find it interesting to hear how others cope with implementing, designing and launching exhibitions. Does everyone else hit the same challenges as I do with each exhibition? It turns out they do – Rosie Broadley, Associate Curator at NPG, presented an honest reflection on the Laura Knight exhibition. Broadley’s most notable frustration was searching for lost portraits. I want to make something clear – curators cannot be expected to create catalogues raisonné before each exhibition, which for many is a life’s work. I can very much relate to Broadley’s predicament – there is nothing more frustrating when you have gone to print on the catalogue and finalised your hang, then someone steps forward with the knowledge of a gem. People will ask (and they always do) why you haven’t presented certain works, and then you find yourself justifying the work you have done. One delegate questioned what could be done to make it clear that you are in search of works for an exhibition. I would suggest using the numerous networks which galleries and museums are now part of. Why not declare exhibitions further in advance which can be passed onto auction houses, private collectors and public collections? Some institutions may consider that this clashes with their marketing plan, however it would mean that every research avenue has been exhausted, allowing curators to sleep easy knowing they have done everything they could do.

Regardless of the frustrations of making a discovery too late, it is fascinating to hear what people have to say in response to your project. Exhibitions should serve more as a talking point, rather than a conclusion in the life of an artist. Without people presenting more information, there would never be the content for future exhibitions, and certainly no motivation, for further research.

You may think this statement too obvious – but this seminar evolved around identity and what constituted identity. Notably identity can be read from techniques and compositions – the identity of a sitter through their uniforms, the identity of an artist through LGBT motifs, to the collective identity of slaves in the eighteenth century. This meant that I, as ever, walked away with a new understanding of different mediums and movements that I would otherwise have failed to appreciate.