You are here: Home News The Need for Temporary Exhibitions: Honouring the Bevin Boys by Angela Thomas

The Need for Temporary Exhibitions: Honouring the Bevin Boys by Angela Thomas 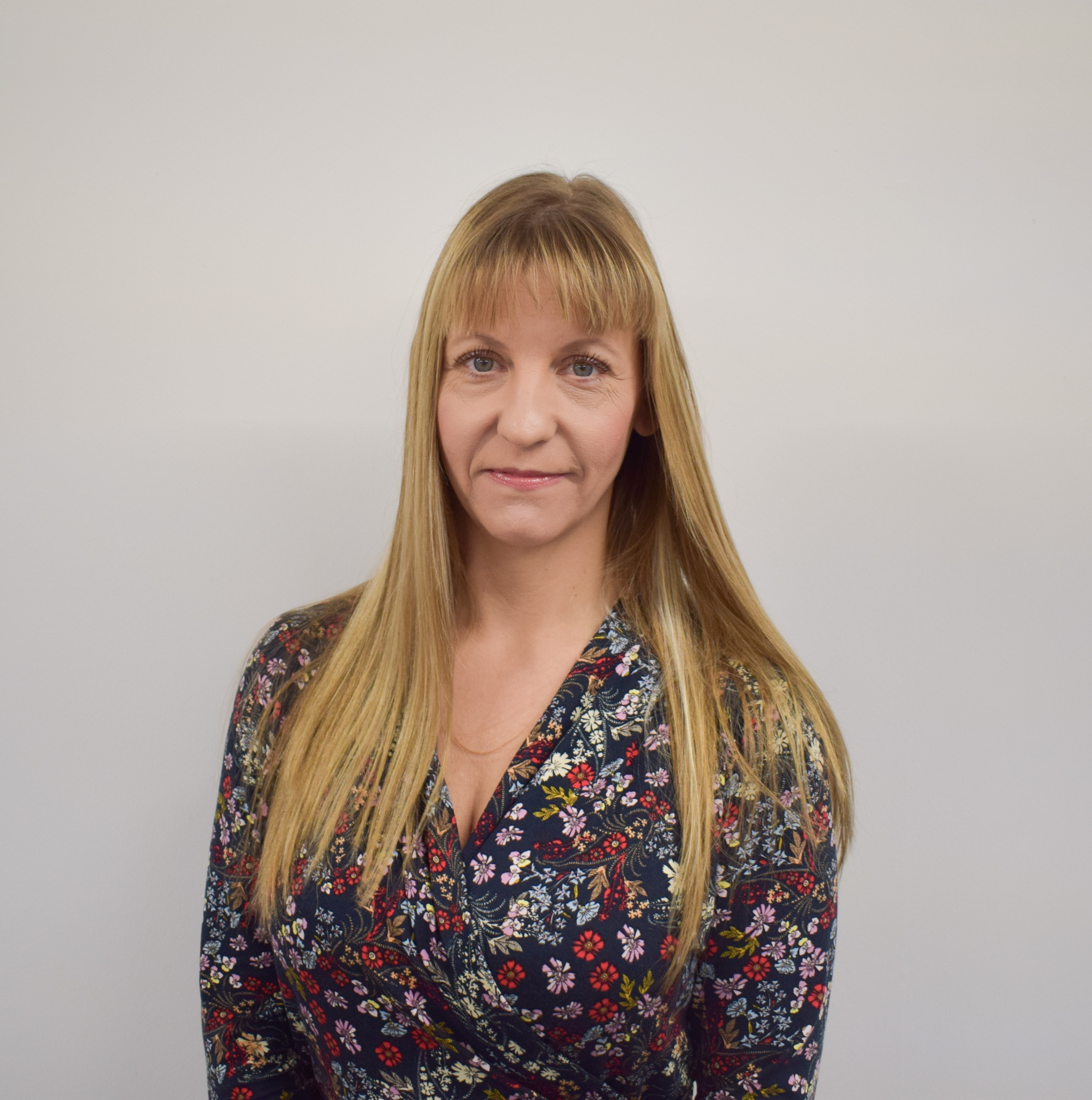 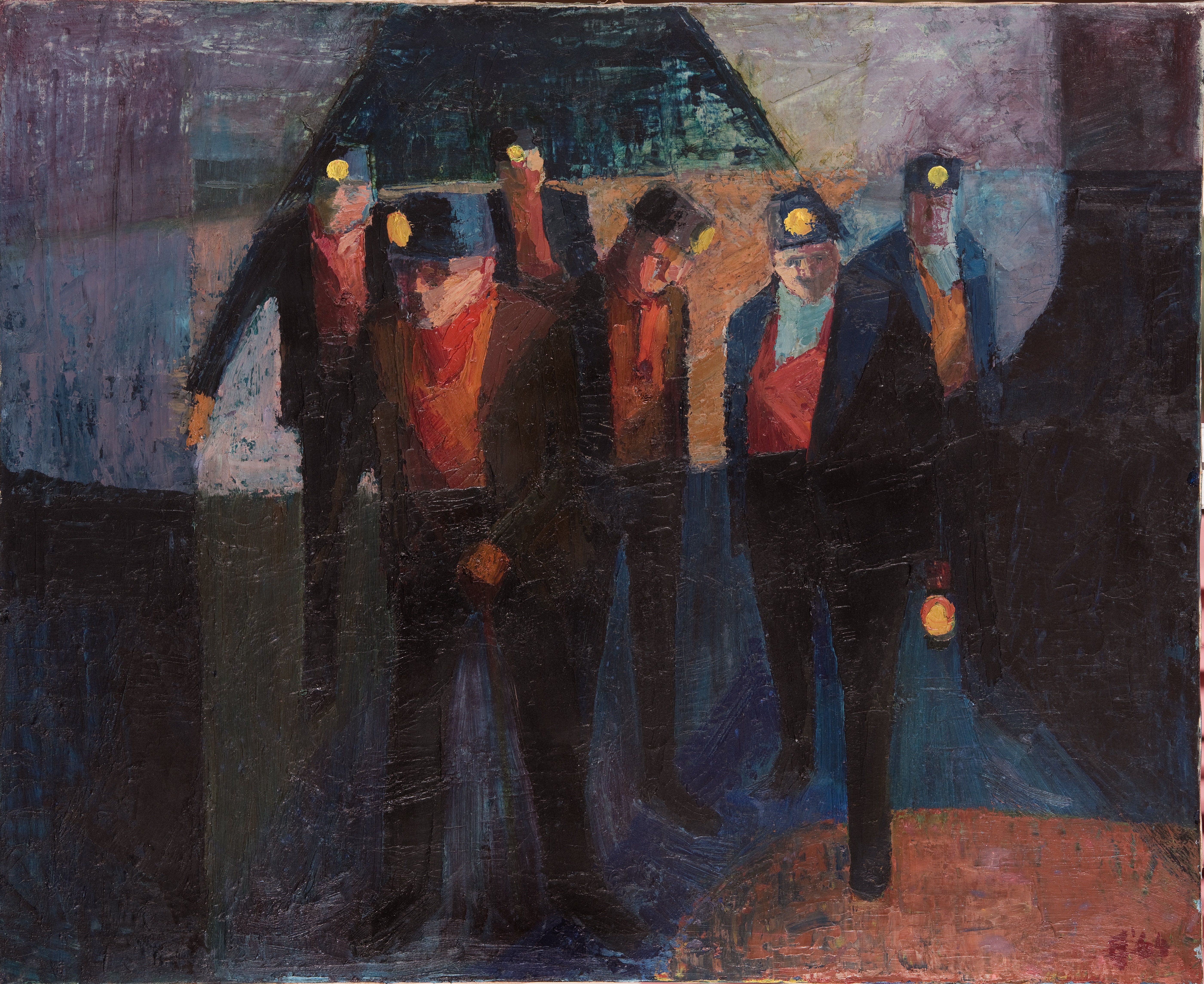 When I saw the title of the SSN Joint Conference was to be Why Exhibitions? I was immediately intrigued and my first thought was ‘Why not exhibitions?’ I was keen to hear what other museum professionals were experiencing that made them consider not having a temporary exhibition programme.

The Mining Art Gallery is the first new attraction to open as part of the Auckland Project, an arts, faith and heritage destination being created in Bishop Auckland, County Durham. Within the next three years, this project centred around Auckland Castle – the 900 year old palace of the former Bishop of Durham – will include a Spanish Art Gallery, Faith Museum, Walled Garden and restaurant and the Auckland Tower visitor centre. Before this conference, I’d never really questioned whether each of these venues would have its own temporary exhibition programme.

The keynote address was delivered by Sandra Penketh, Director of Art Galleries for National Museums Liverpool and the points she raised made me realise what a unique, and fortunate, position we at The Auckland Project are in. The Mining Art Gallery is the first building in the UK to be solely dedicated to the genre of mining art. The collection, housed in a former bank chambers in the market town of Bishop Auckland, County Durham consists of 422 paintings, sketches and prints created mainly by artists either living or working in the Durham Coalfield. 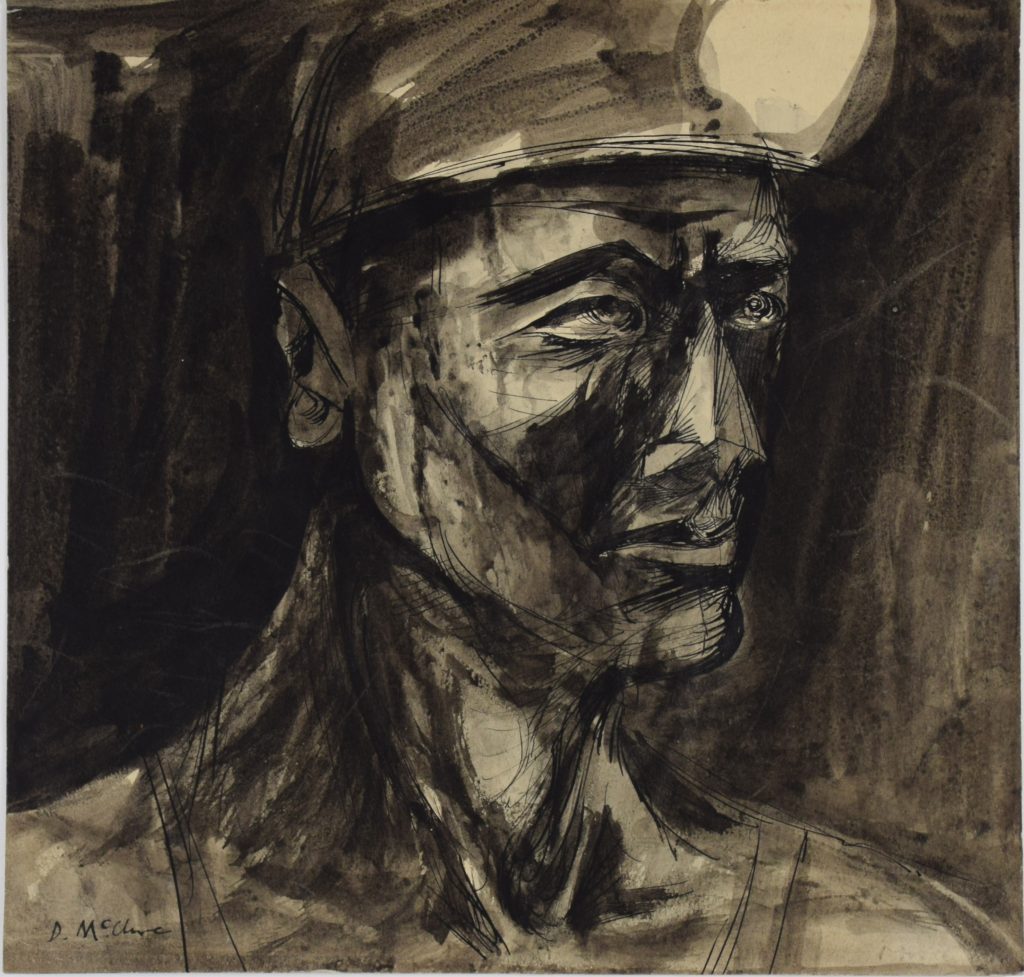 In this we are distinctive; we have no competition. I do however face the challenge of making this genre attractive to a wide demographic of visitors. In the north east, many towns and villages have grown up around coal mines. Where there was a rich seam of coal, a landowner would sink a shaft and men would be employed in the mine. Houses would be built for the families of these men and schools for the children. The landscape of the north east is such that almost every modern town is located near a pit, and the vast majority of the population of the region either worked in the coal industry or had a relative who did. We were concerned though, being the first art gallery in the town, was this what people wanted? Thankfully, this worry was largely unfounded. On the opening day in October 2017, local people queued all day to come in and discover the art produced by the men at the coal face. The positive response was overwhelming and we breathed a collective sigh of relief. The next challenge loomed though: how to get these visitors to come back, and how to attract those who had no connection to the mining industry?

This is where a carefully thought out temporary exhibition programme would seem to be the logical step. The genre of mining art has never been extensively researched and as Sandra Penketh noted, one of the advantages of a temporary exhibition is that it forces research in a particular subject. When researching for the development of the gallery, I discovered that two of the artists whose works are in the collection were Bevin Boys and when writing interpretation I further discovered that few people knew what a Bevin Boy was. The first show seemed decided – it was an opportunity not only to showcase the art of the Bevin Boys but to tell the story of these men who were drafted to save Britain from a shortage of coal during the Second World War. 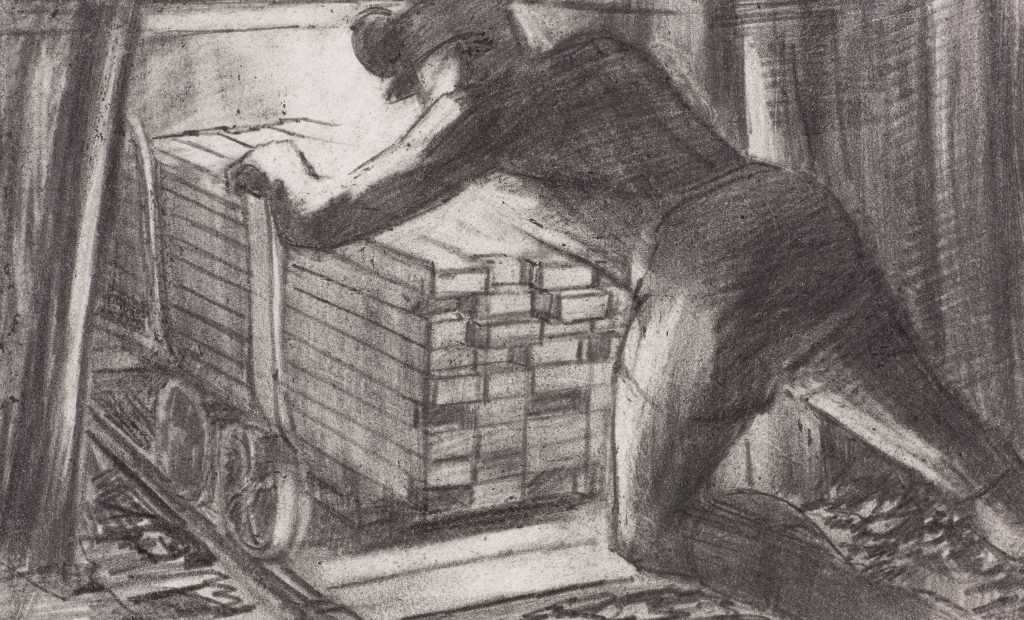 There were 48,000 Bevin Boys in total, all of who must have had their own remarkable story. One such man, Ted Holloway, was conscripted 300 miles from his home in Hampshire to a small pit village just outside of Durham. He had been a creative child, but something about the environment he was thrust into inspired him to draw his underground colleagues. When Holloway’s service ended, he returned to his native Hampshire but within five years he came back to Durham and began working at Craghead Colliery. He continued to depict his working life in his art. The sketches that are on display in this exhibition are from the 1980s but are a reflection of his life as a Bevin Boy some forty years earlier. 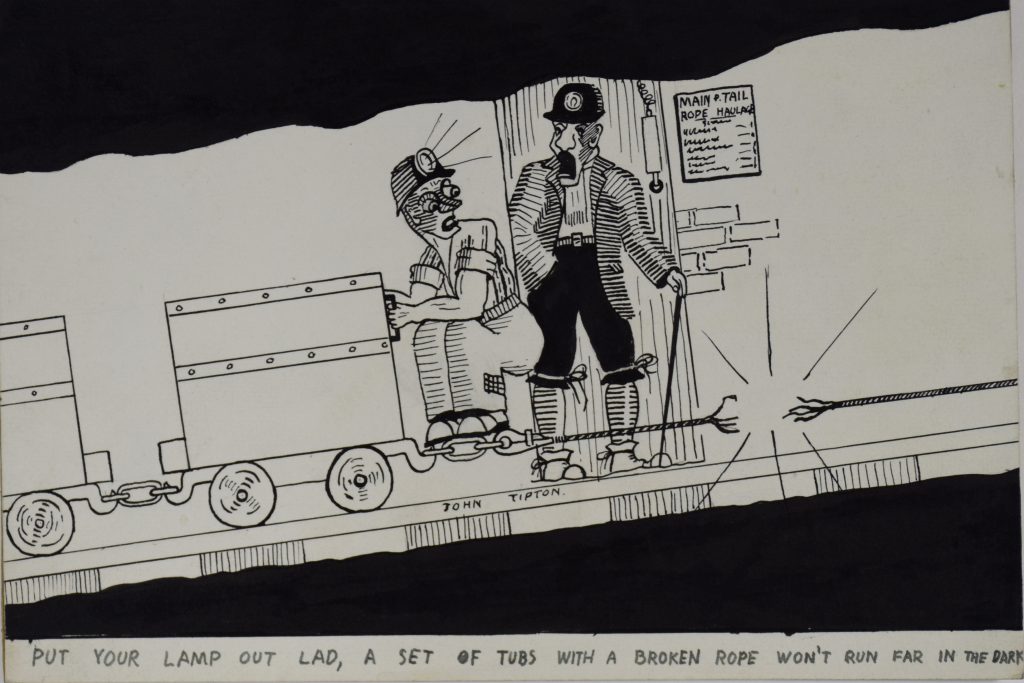 John Tipton was also uprooted from his life when the Bevin Boys scheme began in 1943. He was conscripted to Dean and Chapter Colliery in Ferryhill, County Durham and embraced the change in scenery. He was also inspired to draw his new surroundings and would often explore the industrial landscape around him, sketching and painting landmarks like Durham Cathedral. Our research unearthed his letters home to his mother in which he describes his daily tasks at the colliery and grumbles about the wet weather. His descriptions of life as a Bevin Boy provide us with valuable insights into what life was like for these men. When he was released from service in the mines, he didn’t look back, going on to become a graphic artist for The Observer newspaper, a role he had been practicing for since submitting work to the national magazine Coal while working at Dean and Chapter Colliery. 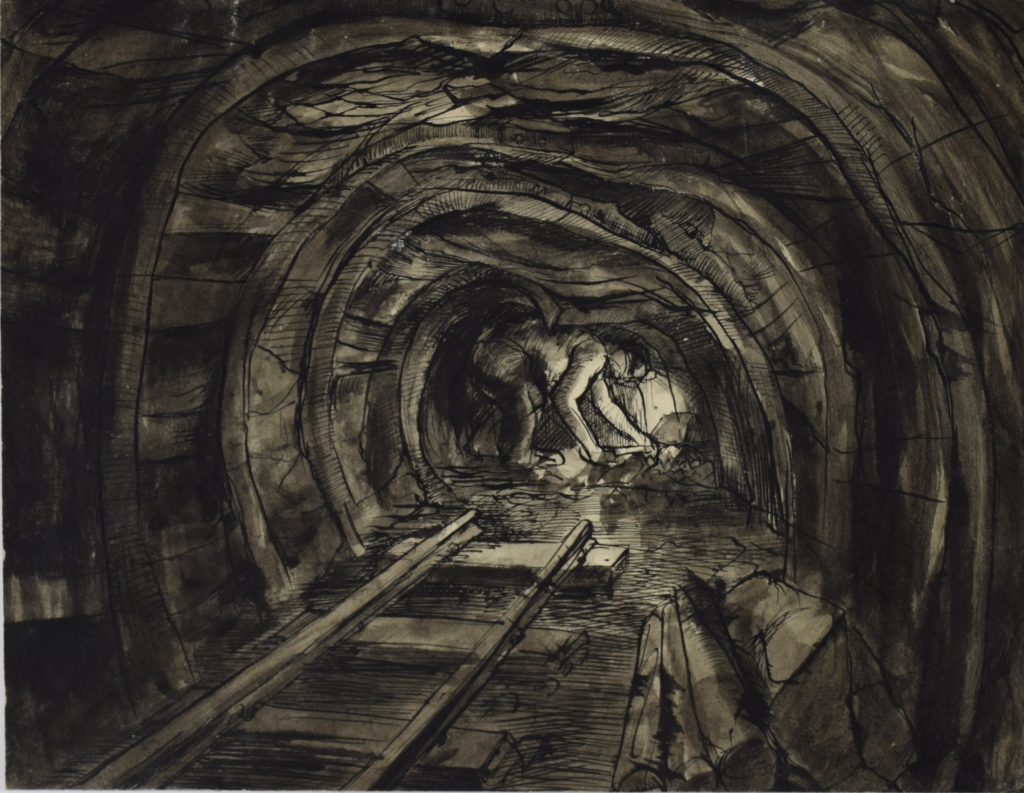 There has already been a positive response to this exhibition on social media, with many of our followers commenting that a relative of theirs was a Bevin Boy. The recurrent topic at the Why Exhibitions? conference was of audience engagement and increasing the level of interaction between the visitor and the institution. The theme of this temporary exhibition already seems to be starting a dialogue with our visitors before it has even opened.