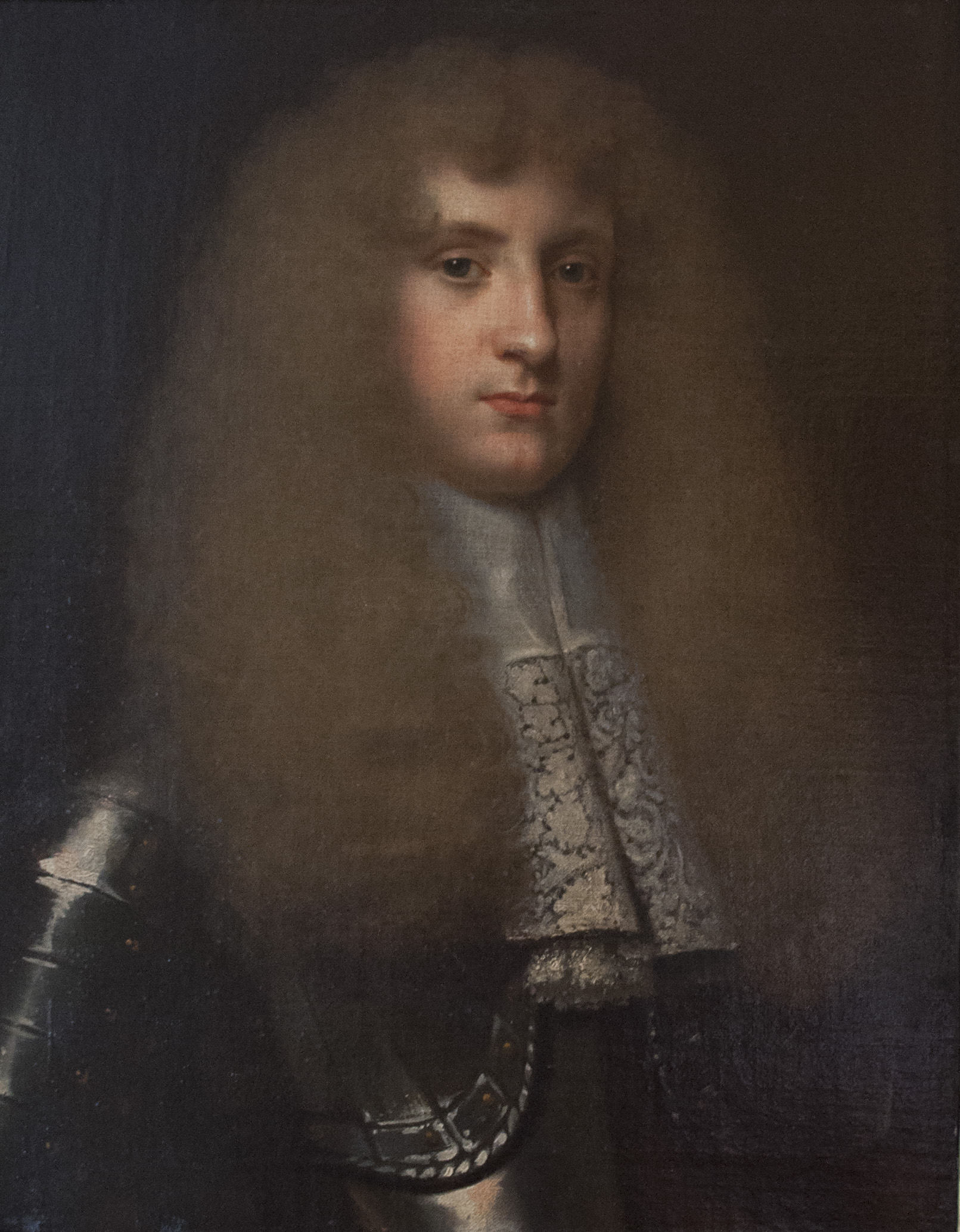 During the recent Understanding British Portraits Study Day at Weston Park, we were expertly guided through the collection by Gareth Williams, Curator & Head of Learning, and Sally Goodsir, who has undertaken a thorough analysis of the provenance and hang of the pictures. Working on a similar project at Woburn Abbey, it was exciting to hear more about this research, particularly as there are close family connections between the two houses. Lady Diana Russell (1622-95), daughter of the 4th Earl of Bedford married Francis Newport, created 1st Earl of Bradford of the 1st creation. Four generations later, Lucy Byng, the sister-in-law of Lord John Russell (future 6th Duke of Bedford) (1766-1839) married Orlando Bridgeman – future 1st Earl of Bradford of the 2nd creation. Unsurprisingly, a number of familiar faces adorn the walls at Weston Park.

We were lucky to have the opportunity to see historic picture catalogues and inventories related to Weston and the other Bradford properties. The 1719 inventory of Richmond House – the 1st Earl and Countess’s residence – was so richly detailed, it was quite a contrast with the early inventories held by the Bedford Estate Archives. Here, paintings are rarely mentioned. When they are – such as in the 1711 inventory of Dry Drayton Manor – Old Masters are given slightly more attention than portraits which are invariably described along the lines of ‘a small head’ and ‘a portrait of a man’, with a few exceptions. 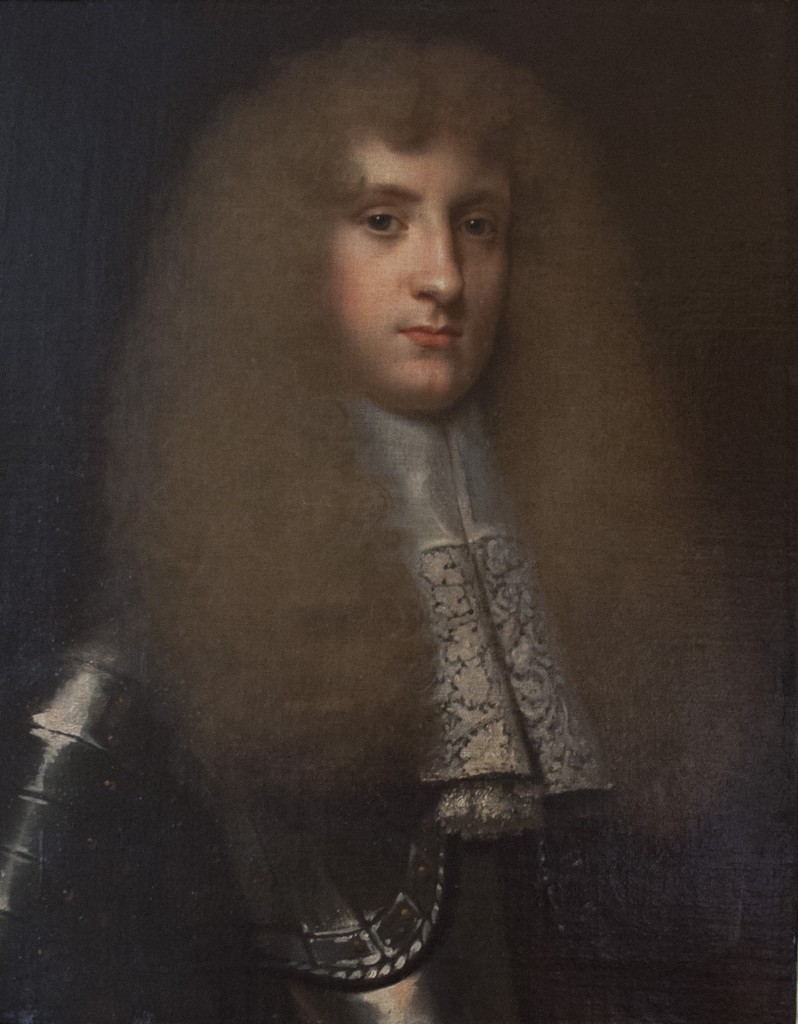 Though the 1719 inventory of Richmond House is taken well after the death of the 1st Earl of Bradford in 1708, it is known from his will that he used the house to display pictures and assumed that the acquisition and arrangement of the listed pictures is his. The earl was an informed collector, though coming to it late in life: his first major purchase being £300 worth of pictures from the studio sale of Sir Peter Lely in 1682 when in his sixties. A number of his Old Masters survive at Weston, though he never lived in the house himself – the estate came to the family in 1705 via his daughter-in-law Mary Wilbraham. The Earl’s collecting habits were, at times, unscrupulous: when ill, he borrowed a book of drawings for diversion and returned it to the owner with a picture missing – it was framed, hanging on the wall by his bedside. Similar aplomb was shown by Lucy Harington, Countess of Bedford of the previous generation, who wrote letters to her friend Jane, Lady Cornwallis, about choice pictures she hoped to acquire upon the death of Jane’s father-in-law.

Lord Bradford’s acquisitions from the Lely sale were joined by portraits of family and important contemporary figures. Even a cursory glance revealed sixteen by Kneller in the Greenhouse at Richmond House, including several portraits of Russells. Perhaps he had been introduced to his art by his brother-in-law, the 5th Earl of Bedford – who employed the artist extensively, including commissioning a full-length upon his elevation in the peerage in 1694 for £30. Kneller painted charming portraits of the future 2nd Duke – as a child aged five and a marriage portrait less than ten years later. Lady Rachel and Lady Katherine Russell (later Duchesses of Devonshire and Rutland respectively) were also painted, as was his son – William, Lord Russell, who was implicated in the Rye House Plot in 1683 and executed for treason (above). Kneller painted William’s widow, leaning on his coffin and holding her head in her hands. An interesting copy, taken from a print, of the head only is in the Weston Park collection and bears little facial resemblance to Lady Rachel (below). 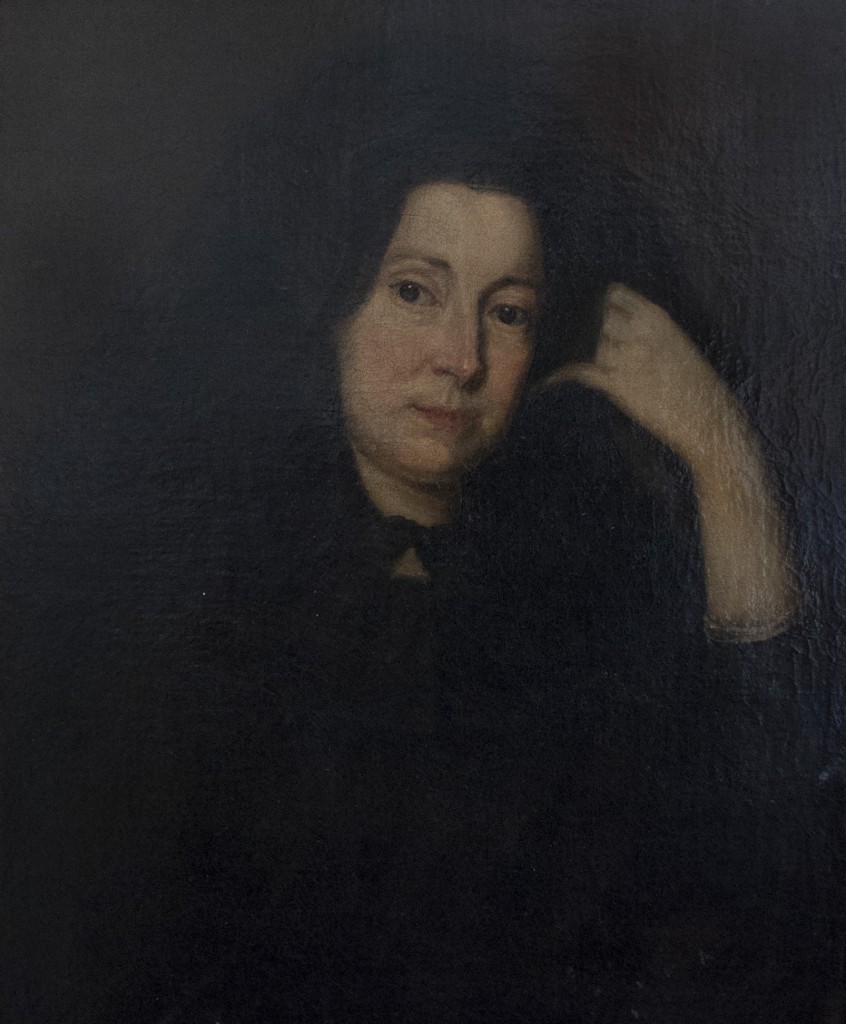 Whilst Lord and Lady Newport clearly had an agenda of collecting portraits of Lady Diana’s relatives, it is interesting that the relationship was unlikely to be reciprocal. There are no identifiable portraits of Lord Newport within the Woburn collection and, from research so far, seems to have never been. A small exception is a small scale group portrait identified as Lord and Lady Newport, but this identification is relatively modern.

The future 1st Countess of Bradford had been amongst the first generation of children to live at Woburn Abbey, and was likely surrounded by portraits. Whilst her father the 4th Earl’s inventory does not survive, and that of her brother does not include paintings, the 4th Earl must have had a considerable picture collection. This is evidenced in the quantity of early family portraits still in situ, his commissioning of portraits of his children, and the existence of a Long Gallery certainly by 1700. Charles Tough lists the paintings there in 1727 and 5 years later the Duchess of Marlborough quipped that is  was full of a ‘great many pictures… which are only valuable as they belong to the family and in antique dress’. Portraits of Lady Diana and six of her siblings had been commissioned from Johannes Priwitzer when the 4th Earl inherited the title. The paintings are all very similar: six of them within feigned stone ovals. Sisters Anne (aged 12), Margaret (9) (below) and Catherine (13) are near identically dressed in black and white dresses with pink bows. Brothers John (7) and Francis (8) also match in green slashed doublets with pink bows. Two children are outside the formula: William (11), who as future 5th Earl is given a full-length portrait in robes of the Order of the Bath, and little Lady Diana, (5) who appears in an oval format, in a white embroidered dress, with one arm out into the feigned oval space to place a hand affectionately around a jackdaw perched on the ledge. A portrait at Weston Park of Lady Diana as a young child has oscillated in its attribution – at one point Priwitzer was a contender, but following the Study Day at Woburn in 2015 this was firmly quashed. In fact the style of dress of this child places her in an earlier generation and it is highly unlikely to be Lady Diana at all. 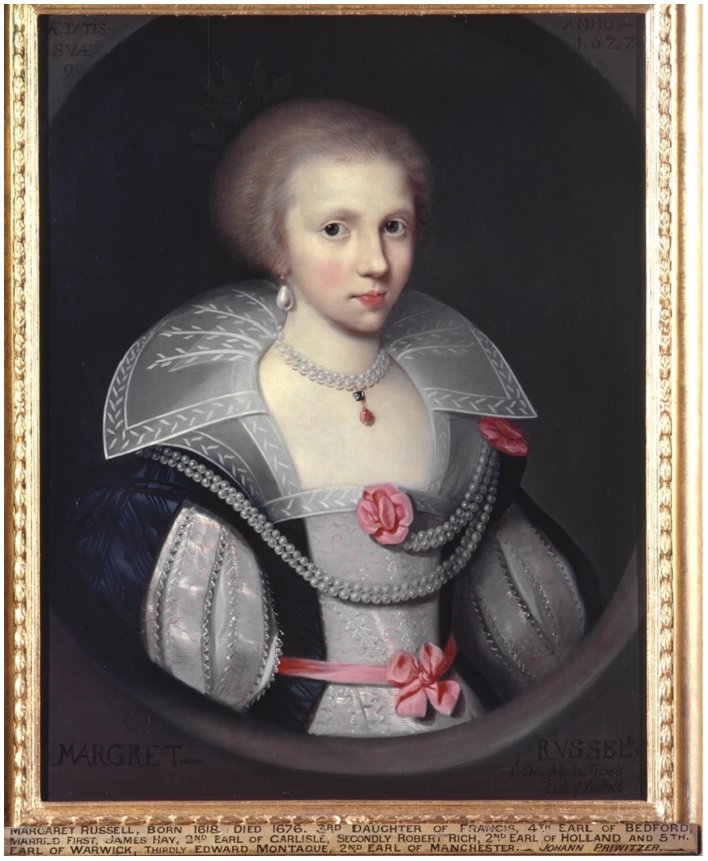 While there isn’t space to discuss here, the connections between the later generations of the families was also fascinating to explore. The diaries of the mother of the 1st Earl of Bradford of the 2nd creation are currently being transcribed by dedicated volunteers at Weston, who have deciphered her tiny scrawl. This is as papers of Lord John (6th Duke of Bedford from 1802) are being given more attention at Woburn. These projects are revealing ever closer allegiance between the two men and the Prince Regent, and, it will be interesting to see, the two families. The day provided an interesting opportunity to explore these family connections and it will be satisfying to see what further research reveals.