You are here: Home News William Rothenstein as a Portraitist by Samuel Shaw

William Rothenstein as a Portraitist by Samuel Shaw 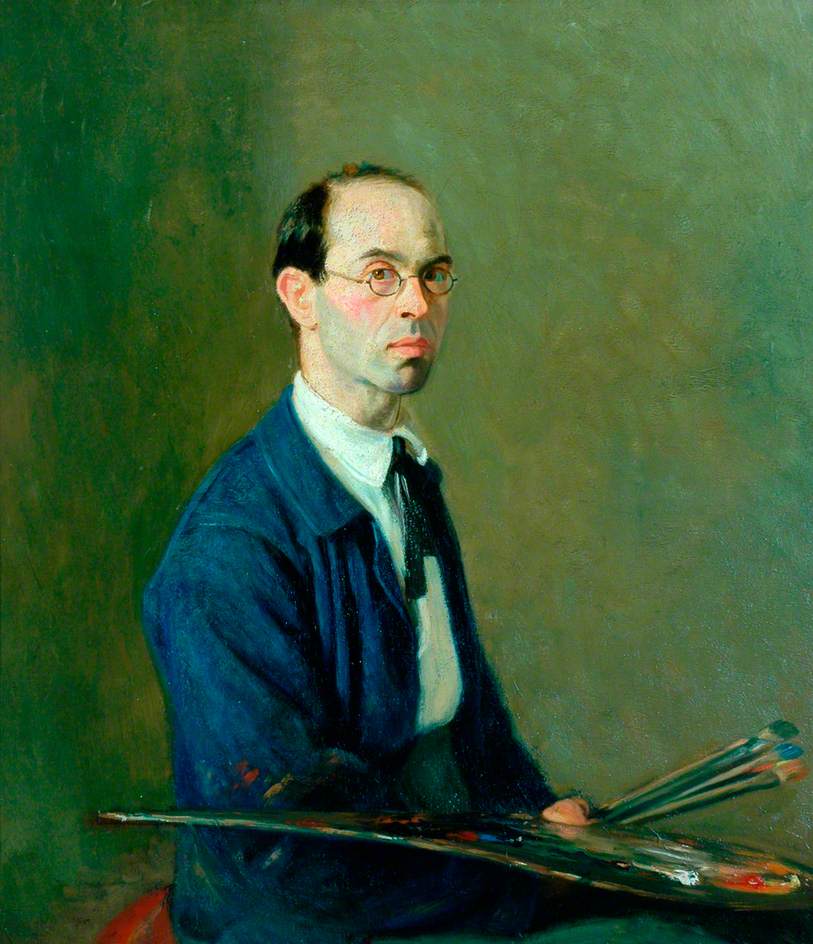 As a portraitist, Sir William Rothenstein (1872-1945) is probably best-known for his chalk drawings and lithographs of famous figures, over two hundred of which are held at the National Portrait Gallery. Rothenstein launched himself on the British art scene as a portraitist in the early 1890s, and continued the practice until his death (one of his last projects, indeed, was an ambitious sequence of war portraits, detailed in the 1942 publication Men of the R.A.F.). A wide range of people sat for Rothenstein, from Emile Zola to Albert Einstein – with many of them sitting more than once.

A small group of these drawings and lithographs form part of the retrospective From Bradford to Benares: The Art of Sir William Rothenstein, now on at Bradford’s Cartwright Hall Gallery. Here an early pastel of a brooding Augustus John hangs next to a lithographic portrait of the sculptor Auguste Rodin: two artistic figures whose reputation Rothenstein (a tireless and highly effective social networker) did so much to enhance. The bulk of the portraits in the show, however, are oil paintings: an area of Rothenstein’s work that has hitherto received very little attention.

The exhibition opens with an 1906 self-portrait. This is one of at least a dozen major self-portraits Rothenstein completed over his career, which shown him in a variety of guises: as a confident youngster, a war artist, professor at the Royal College of Arts (a role he took up in the 1920s), and a collector of Indian art. The 1906 self-portrait was painted during a period when Rothenstein was involved in many activities beyond that of artist; for that reason, perhaps, he seems very keen in this work to present himself as a painter first and foremost – and a rather earnest looking one at that. 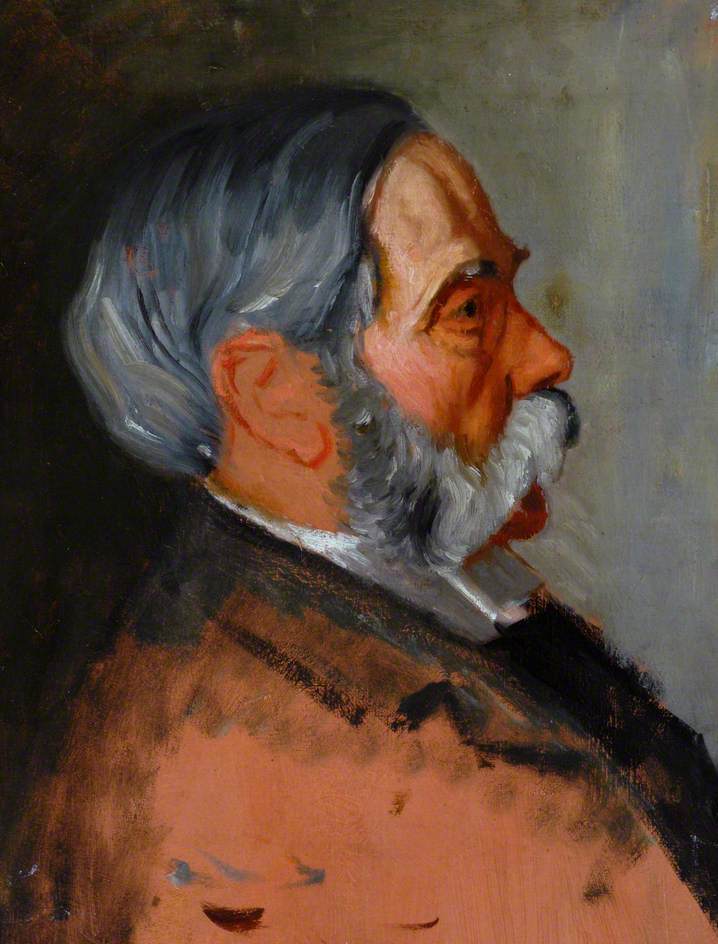 The self-portrait is followed by two small works depicting Rothenstein’s parents. Moritz Rothenstein, his father, had emigrated from Germany in 1859 and established himself as a successful textile merchant in Bradford, West Yorkshire. Moritz’s interest in the arts would seem to be confirmed by the fact that he allowed two of his three sons – William and Albert – to study at the Slade School of Art in London, and pursue art as a living. In these turn-of-the-century paintings, Rothenstein represents his parents with bold brushstrokes and a moody palette that speaks of his passion for Rembrandt (whose reputation had reached new heights following major exhibitions in Amsterdam and London).

The most interesting portraits in the exhibition, nonetheless, are those depicting relatively unknown figures. This practice may have started during a visit to India in late 1910, where Rothenstein concentrated not on influential individuals, but on people he met in the street. In 1912, on a walk in the Gloucestershire countryside with the Indian poet Rabindranath Tagore – who Rothenstein also drew many times – he came across a deserted farmhouse which he decided to rescue and renovate. From then until the end of his life he would continue to have a base in Gloucestershire, where he would paint a series of ‘local characters’. 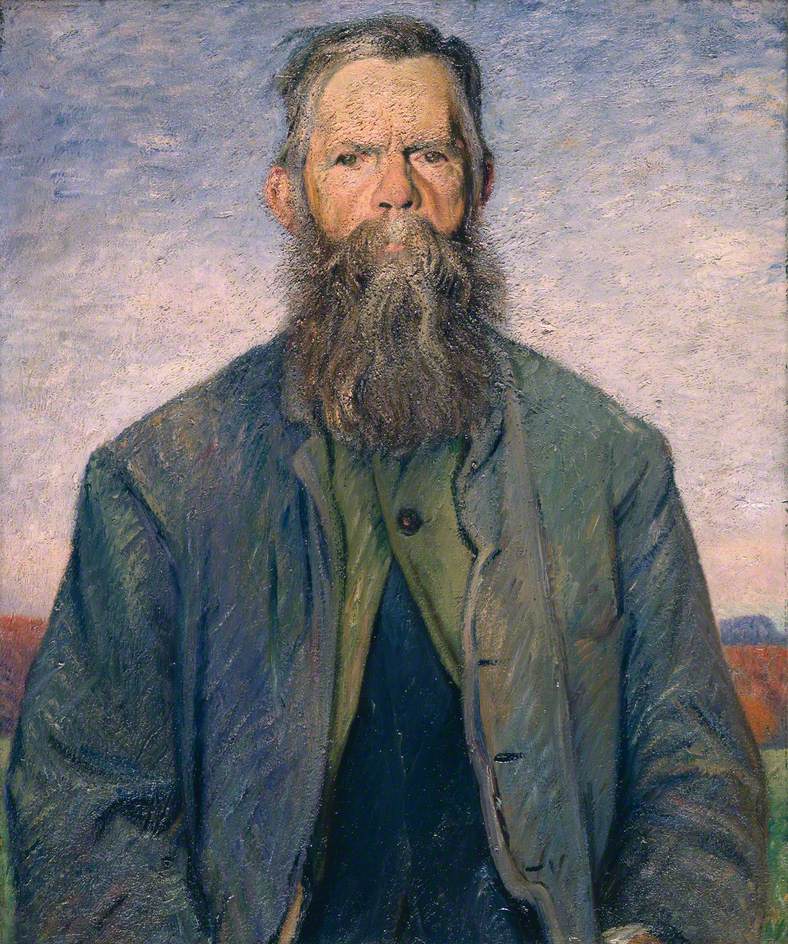 One such character was Eli Gardiner, an elderly thatcher, whose face reminded the artist of Leo Tolstoy (if not the old bearded Jewish men he had painted in the East End of London in the mid-1900s). In 1913 Rothenstein painted a half-length portrait of Eli, situated within the Gloucestershire landscape, staring straight out at the viewer. It is one of Rothenstein’s most compelling works, reminiscent of the portraits Vincent Van Gogh made of the postmaster Joseph Roulin in the late 1880s. The connection makes a lot of sense, in fact, since both Rothenstein and Van Gogh were heavily influenced by the work of the French artist Jean-François Millet, whose dedication to ‘local’ subjects was widely celebrated. Millet’s influence was also widely felt among late nineteenth and early twentieth-century rural naturalists such as George Clausen who sought – for better or worse – to imbue working-class figures with a certain dignity or heroism. The strength of Eli the Thatcher, however, would seem to lie in Rothenstein’s tendency not to over-romanticize or patronize his subject. There is no obvious narrative here, but a record of an encounter.

The surface of this painting is markedly different to the earlier portraits of the artist’s parents. No reproduction can ever quite capture the absorbingly bumpy nature of Eli the Thatcher; its beard so conscientiously painted that it has become sculptural. Eager at this stage of his career to show something of what lies beneath the surface of reality, Rothenstein responded, somewhat ironically, by adding layer upon layer of paint to his canvasses. Eli the Thatcher is not just the record of its subject, but a record of the artist’s concerted effort to do that subject justice.

Many of Rothenstein’s Gloucestershire portraits remain mysterious. Although the artist seems to be asserting the right of these ‘local characters’ to be the subject of a major portrait, he often undercuts this by not giving us their actual names. Who are the people behind The Old Gardener and The Village Priest, both reduced – like Eli the Thatcher – to their trade? And what is the story behind the curiously dressed Miss Grant? Rothenstein left behind an impressive record of his life, including three volumes of published memoirs, and a mass of archival material. Thus far, however, I have been unable to locate a single thing pertaining to this portrait. 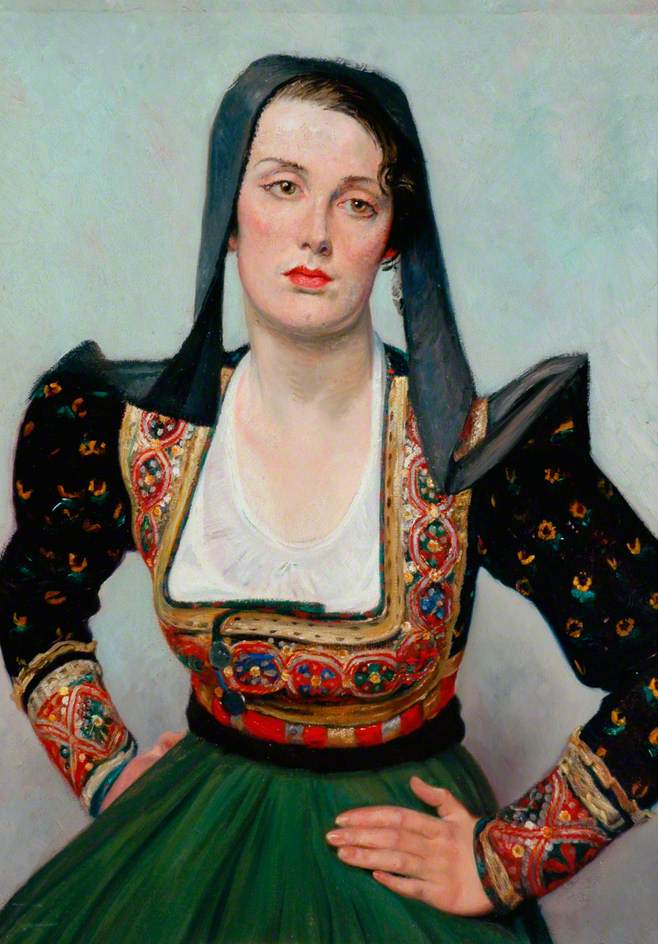 The first major exhibition of Rothenstein’s work for over forty years, ‘From Bradford to Benares: The Art of Sir William Rothenstein’ provides us with a long-overdue opportunity to reconsider Rothenstein’s art in a wider context. Portraiture is just one of those contexts, and one of many themes that deserves further attention. The range of Rothenstein’s portraits is huge, in terms of subject matter and of style – and probably merits an exhibition of its own. To have so many of Rothenstein’s pictures on display at one time, however, is clearly a step in the right direction.

‘From Bradford to Benares: The Art of Sir William Rothenstein’ is on at Bradford’s Cartwright Hall Gallery until July 12th. The exhibition was curated by Jill Iredale. Samuel Shaw wrote the accompanying catalogue – on sale at the gallery – as well as advising on the exhibition. Portions of the show will travel to the Ben Uri Gallery later in the year.