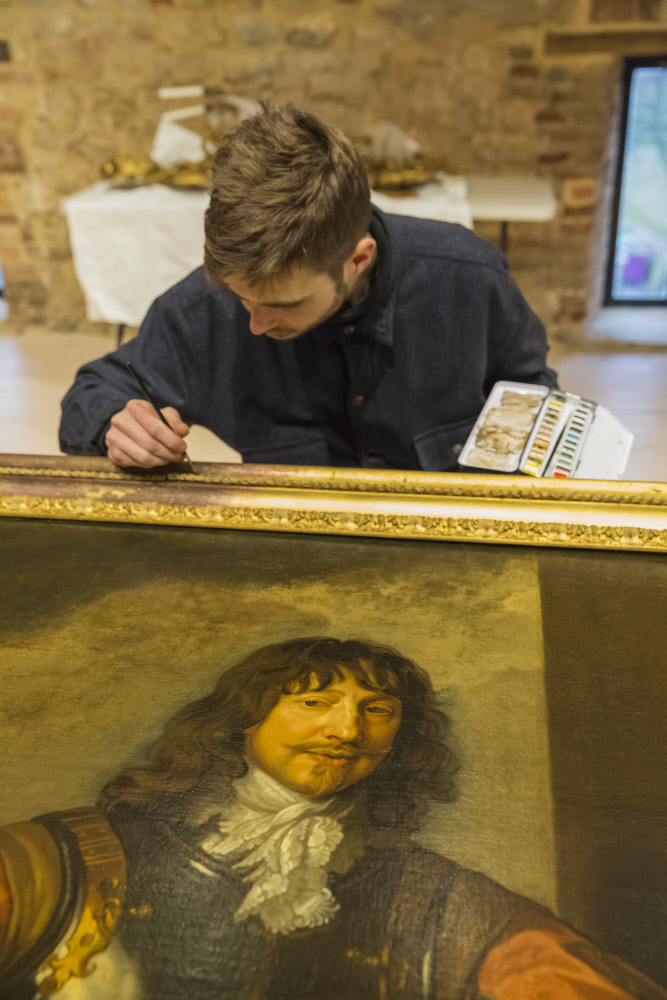 Welcome to our Annual Seminar 2021 online presentations. The network Steering Group chose eight submissions from our open call for papers, and the recorded fifteen-minute presentations are below.

A portrait in a locket: the hidden male jewel

Lockets are often thought of as primarily feminine jewels but there is a rich history of men owning and wearing them. In this talk, I will look at this fascinating portrait jewel and its importance to men in the nineteenth century. What lockets did they wear? Why and where were they wearing them? What function did they serve and how was this understood?

Rachel Church has written and lectured widely on jewellery history and design. She is the author of ‘Rings’ (V&A/Thames and Hudson 2011 and 2017) and ‘Brooches and Badges’ (V&A/ Thames and Hudson 2019) alongside many shorter articles and contributions to catalogues. She worked as a curator at the Victoria and Albert Museum for over 20 years and was part of the team which redeveloped the William and Judith Bollinger Jewellery Gallery in 2008 and 2018 as well as working on the redevelopment of the British Galleries, Silver Galleries and Sacred Silver and Stained Glass.  She is particularly interested in the social history of jewellery and is currently researching male jewellery.

This year’s UBP Fellows will present their ongoing projects, both of which address the challenge of decolonising portrait presentation and interpretation within their respective collections. For this joint presentation with their Fellowship Mentor, they set out their project methodologies and goals, research findings and challenges to date.

Laura Claveria’s project at Leeds Art Gallery is called ‘From ‘A Negress’ to ‘Lady in a Hat’: Revisiting Phil May’s Work from a Decolonising Perspective’. Laura aims to re-examine a drawing by Phil May (1864–1903) originally titled ‘A Negress’ (1879-1903) from three different perspectives: the sitter, the artist and the curator. The paper offers an overview of the project and an update on her main findings as well as sharing some key learning points around decolonising practices.

Alex Patterson’s project is entitled ‘The Colonial Legacies of the Liverpool Sandbach Family’. Three sculptural relief busts of members of the Sandbach family in the Walker Art Gallery have prompted Alex to research the Sandbachs, a family of shipowners, brokers, merchants and plantation owners, exporting sugar, coffee, molasses and rum from the Caribbean. Their businesses in Liverpool and Glasgow relied on slavery and later indentured labour to operate lucratively. Alex aims to reinterpret these portraits in collaboration with a young person’s steering group to confront the family’s link to slavery and empire

This year’s Fellows are supported by mentor Christelle Pellecuer who speaks about her role in supporting the Fellows in realising their projects, and the inherent challenges within decolonising activities.

Laura Claveria is a PhD Art Historian and art curator with experience working in multiple art galleries and museums in the North of England. She is currently responsible for the works on paper collection at Leeds Art Gallery as well as The Picture Library, an art lending scheme. At the moment, she is working on a number of decolonising projects and exhibitions due to open in 2022.

Alex Patterson works across National Museums Liverpool’s three art galleries. At the Walker Art Gallery, she has led on two major exhibitions, REALITY: Modern and Contemporary British painting (2015) and Victorian Treasures (2017). In 2018 she worked on the John Moores Painting Prize and curated Jacqui Hallum’s (first prize-winner) solo display The View from the Top of a Pyramid (2019‒20). More recently she was responsible for the creation of Whistler and Pennell: Etching the City (2018‒20) and Augustus John: The Last Bohemian (2021) exhibited at Lady Lever Art Gallery and Sudley House. Alex has developed curatorial specialisms in sculpture, digitisation and collections management. Her background is in Museum Studies and Fine Art.

Christelle Pellecuer is the Founder and Creative Director at Razana Afrika, a community organisation using African history and culture to inspire and transform communities and engage young people to improve their motivations and achievements. As part of this work, Christelle curated an exhibition called “African Queen”, which looked at the story and portrait of 18 historical and legendary Africans queens whose stories are not widely known and told. Christelle also has experience of working in the area of decolonising museums and education.

Patricia Ferguson, Independent Researcher and Hon. Adviser on Ceramics to the National Trust

Between 1773 and 1788, the entrepreneurial Staffordshire potter Josiah Wedgwood I and his business partner Thomas Bentley produced almost 450 ceramic portrait medallions, playing to the neoclassical passion for small-scale portraiture. The majority were white, elite, privileged and male, notable members of European royal households or long-deceased historical figures. Their images were after bronze medals, engravings and ivories, but sometimes modelled from life, and moulded in relief in stoneware, either his black basalt or, from 1776, a white or tinted stoneware, known as Jasper ware. The manufacturers advertised them in seven printed catalogues, under Heads of Illustrious Moderns from Chaucer to the Present Time. For the 1787 catalogue, Wedgwood assembled a sub-section, entitled simply ‘Ladies’, with heads of women from existing medallions, and the following year, in the French-language edition, styled ‘Femmes célebres’, he included several new commissions of sitters in fashionable dress. Eleven of these sitters were contemporary British women representing royalty, aristocrats, poets, educators and an actress, forming a gallery or cabinet of female worthies. This paper analyses his choices, explores the criteria for their selection and asks what were the narratives of celebrity that made these particular individuals marketable and how does this information inform us of the status of women in the eighteenth century?

Patricia F. Ferguson was Project Curator at the British Museum from 2017−20, focusing on European ceramics, including Wedgwood portrait medallions, and print sources. Ferguson edited the British Museum Research Publication Pots, Prints and Politics: Ceramics with an Agenda, from the 14th to the 20th Century (2021). Between 2006 and 2017, she was a consulting curator in the Asian and Ceramics Departments of the Victoria and Albert Museum. As Honorary Adviser on Ceramics to the National Trust, she published Ceramics: 400 Years of British Collecting in 100 Masterpieces (2016) and Garnitures: Vase Sets from National Trust Houses (2016).

Thomas Cavendish and a Traverse board

Life Stories: Real People revealed in portraits and objects is an exhibition about intimacy, revelation and the human presence. Centred on the pairing of portraits and objects the show introduces the visitor to faces and things they may have seen but not looked at before. Rewarding close looking by encouraging the personal encounter with the familiar and overlooked Life Stories encourages the visitor to look again and close a pre-conceived distance with people from the past.

Presenting in detail Thomas Cavendish and a Traverse board Sash will discuss why this challenging pairing was included and their context within the exhibition.

Sash is Curator of Decorative Arts at Chatsworth and responsible for collections at Chatsworth, Bolton Abbey, Compton Place and Lismore Castle. Sash has a back ground in both archaeology and art history and worked for the National Trust for ten years before joining Chatsworth in 2016.

In this talk PhD researcher Sophie Johnson explores the reasons why women wax portrait modellers are absent from art historical research and museum displays. Arguing that by reclaiming wax portrait modelling we will recover an important chapter in the history of women artists.

Sophie Johnson is a PhD candidate at the University of Bristol. Her research explores the under-representation of pre-twentieth century women sculptors in UK public art collections. Sophie is also a Relationship Manager for Museum Accreditation at the Arts Council England. Sophie gained her BA in Archaeology at Cardiff University in 2014 and her MA in Public archaeology at UCL in 2016. She went on to become a successful heritage professional working for the National Trust and an independent medical museum. Most recently, Sophie was an Assistant Curator of Sculpture at the V&A with responsibility for the museum’s collection of waxes.

‘[U]nalloyed gold of purest romance’: The reality and romance of the autochrome portrait

The autochrome, the first commercially successful and accessible colour photography process, was described as a ‘revolution’ upon its release in 1907. Excitement and anticipation swirled around the autochrome which promised a portrait in ‘lifelike tones’. The challenges of the autochrome process, however, soon highlighted their unsuitability for photographic portraits. Nevertheless, people were still drawn to the process to produce artistic portraits and images of loved ones for posterity. This paper will draw on recent work to research, catalogue and digitise the V&A’s collection of autochromes, comprising approximately 2,500 works.

Catlin Langford is the inaugural Curatorial Fellow in Photography, supported by the Bern Schwartz Family Foundation at the Victoria and Albert Museum. She is presently working with the V&A’s autochrome collection, which will inform an upcoming publication with Thames & Hudson/V&A. Langford was previously Assistant Curator at the Royal Collection Trust, where she specialised in nineteenth-century photography. She completed her Masters at the Courtauld Institute of Art in 2016, focusing on the curation of vernacular photographs.

The collection of portraits of Speakers of the House of Commons forms a distinct group within the Parliamentary Art Collection. Established in the 1790s and displayed at Speaker’s House in the Palace of Westminster, it presents a visual history of the Speakership, collectively representing the unique lineage and status of the role. It is a living collection that expands with each new occupant of the Speaker’s Chair. This paper gives an insight into the experience of researching the portraits as part of the development of the first interpretation programme for the collection.

Rab MacGibbon is Research and Engagement Fellow at the Parliamentary Art Collection. His role involves developing displays and interpretation and researching the collection and potential acquisitions. He is on secondment from the National Portrait Gallery (NPG), where he is Curator, 17th and 18th Century Collections. Recent exhibitions and publications include Icons and Identities (NPG international touring exhibition, 2021), Elizabethan Treasures (NPG exhibition, 2019), and Nature’s Champions (National Trust touring exhibition, 2019).  He studied at the Courtauld Institute of Art and has previously worked for the National Gallery and British Council.

Amgueddfa Cymru has in its collection a full-length portrait of Sir Thomas Picton by Sir Martin Archer Shee in military uniform. Historically hailed a national hero, he is equally notorious for his cruelty, particularly as the first British colonial Governor of Trinidad.  Until now, the museum has made little reference to Picton’s cruelty when exhibiting the portrait. This has perpetuated a narrow, ‘white-washed’ view of history – one which ignores the atrocities of our colonial past. The Reframing Picton project is using art to challenge the traditional narrative by centering Black consciousness and voices, and challenging the systemic and structural racism that continues to inflict harm today.

Reframing Picton is a collaboration between: