You are here: Home Events Tour of Private Family Portrait Collections in the North East, 9 March 2011

The owners of Blagdon Hall and Capheaton Hall generously welcomed delegates to their homes to explore their rich family portrait collections.

Blagdon Hall has been owned by the same family since 1700, when it was acquired by Matthew White I (d.1716), a coal merchant, at the time of his marriage to Jane Fenwick. Their son Matthew White II (d.1750) built the present Blagdon Hall between 1720 and 1750. The Whites intermarried with their entrepreneurial coal-mining business partners, the Ridleys, who inherited the property and baronetcy of Blagdon in 1763. The family’s property, commercial interests and influence in the region steadily increased over the generations, successive Ridley baronets (invariably bearing the Christian name Matthew) represented Newcastle or North Northumberland in Parliament before being raised to the peerage in 1900. 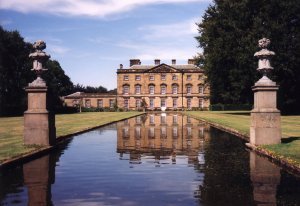 Reflecting its role on the national stage, the family’s portrait collection includes works by the leading practitioners from the eighteenth century to the present day, artists such as Mercier, Hudson, Gainsborough, Lawrence, Hoppner, Romney, Tilly Kettle, Hubert von Herkomer, Rodrigo Moynihan, William Nicholson, Rex Whistler, Derek Hill and Andrew Festing. Of exceptional interest is the early John Hamilton Mortimer portrait of Sir Matthew White Ridley (1745-1813), 2nd baronet, and his American friend Charles Pinckney (1757-1824), demonstrating the classical tastes of two men who has studied together at Westminster and at Christchurch, Oxford. The latest addition to the portrait collection depicts the present owner Matt Ridley (our host), with his father, the 4th Viscount Ridley, and his son, by Marie-Claire Kerr.

Capheaton near Wallington has been home to the Swinburne family since the twelfth century. The present Capheaton Hall was built in 1667-68 by the Newcastle architect Robert Trollope (fl.1660-85) for Sir John Swinburne, 1st Baronet. Peter Hartover’s ‘portrait’ of the house at the time of its completion still hangs at Capheaton, and Trollope’s original Restoration design survives almost unaltered on the south front, while the Georgian north front is by the well known local architect William Newton.

Capheaton is home to a remarkable portrait collection, mainly of the seventeenth to nineteenth centuries. Reflecting the Swinburnes’ loyalty to the crown during the civil war (in recognition of which the baronetcy was created by King Charles II in 1660), the collection contains a portrait of Charles I by Van Dyck or his school. Family portraits of the successive Swinburne Baronets and other members of the family, many of them with Jacobite connections, are also among the collection, executed by artists such as Jervas, Hussey and Hudson amongst others, although only one of the three Gainsboroughs of Sir Edward Swinburne and his two sons remains at Capheaton. Several members of the family completed a Grand Tour of Europe in the eighteenth century, most notably the amateur artist and travel writer Henry Swinburne (1743-1803), and his wife Martha Baker who lived in France, Italy and Vienna for the period 1774-83 and were painted in Rome by Batoni. Although these portraits descended in the cadet line, the collection does include a fine portrait of Henry’s brother Sir Edward Swinburne, 5th Baronet, by Batoni’s contemporary Anton von Maron. The collection also contains a group of portrait studies by the family’s drawing master William Mulready (1786-1863) and his Swinburne pupils.