You are here: Home Queries Artists Seeking information on the artist ‘J. Cooper’ 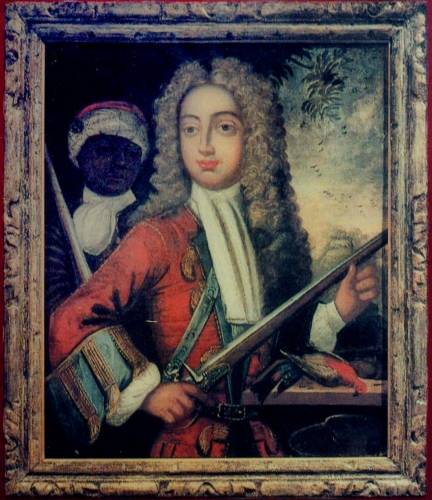 Portrait of a man with a firearm, attributed to J Cooper, location unknown

A scholar in the US presents research into this early eighteenth-century artist know only as ‘J. Cooper’:

For several decades a number of ‘folk art’ style portraits, usually of courtiers, monarchs or allegorical have shown up in the United States, primarily New England. Many are signed “J. Cooper” or “J.C.” or no inscription. Despite much interest in these, no researcher has come up with a sure identification of J. Cooper. The paintings are sometimes dated, 1714, 1715, 1716, 1717, 1718. One is inscribed “J. Cooper ad vivum Pinxt et fecit.” 30 x 25in. is the most frequent size, some are smaller (one is as small as 14 x 12in.), and a couple are about 38 x 30in.

They display a bold colorful style and would appear to be based on prints.

There is some literature on ‘J. Cooper’. The best is George C. Groce: “Who was J[ohn?] Cooper? (b. ca. 1695- living 1754?) in Art Quarterly vol. XVIII no. 1 Spring 1955. p.69-82), wherein he speculates that J. Cooper is John Cooper, son of mezzotint publisher Edward Cooper, London. In 1988, in answer to a similar inquiry as this, Jacob Simon (National Portrait Gallery) sent me eight images of paintings, most of them clearly in J. Cooper’s hand, which were recorded in the NPG’s Heinz Archive & Library, and with associations with UK ownership. So there is evidence of his selling his paintings on both side of the Atlantic. In 1994 the Chipstone Foundation (Milwaukee Wisconsen) published an article on furniture making in Boston but made note of a “John Cooper, painter”, in a court case in Boston M.A., which may be the first evidence of his actually being in the colonies. I have catalogued 76 so far and others turn up from time to time. Most are now in public collections.

Please use the ‘add a comment’ facility on this page to respond to this query.