You are here: Home Reviews Marcia Pointon, ‘Portrayal and the search for identity’, reviewed by Lara Perry, University of Brighton

Marcia Pointon, ‘Portrayal and the search for identity’, reviewed by Lara Perry, University of Brighton 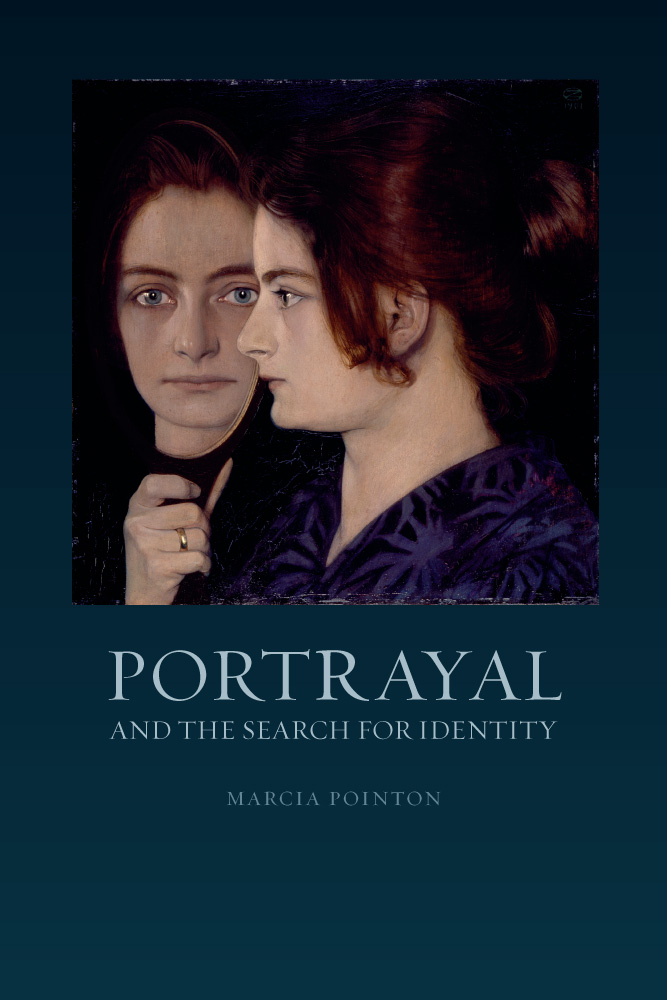 Marcia Pointon, 'Portrayal and the search for identity'. Reaktion Books, 2012

Portrayal and the search for identity is an enjoyable and meaty read, bound in a handsome but manageably-sized volume with a fascinating sequence of 80 colour illustrations (plus 20 more in black and white). Prospective readers should not take the title too literally, since the book is not on a search for something called identity. This latest arrival in Marcia Pointon’s impressive bibliography of substantial works on portraiture (most notably Hanging the Head of 1993) begins from a far more interesting position. Instead of something that is lost and found through portrayal, this book posits identity as a shared language for individuation that is articulated through a variety of expressive forms including literature, dress, gesture, complexion and, of course, portraiture. Much of the intellectual foundation of this interpretive practice rests in the author’s very extensive knowledge of literary theory, whose presence is evident in notes and references but emerges in the text primarily in the author’s own lucid prose. In the five chapters of this book, Pointon treats ‘portraiture as a tool that makes possible the registering of an identity in relation to the social’ (p11), thus releasing the study of portraits from the cold grip of the unanswerable question, does it look like the sitter? to ask, how does it look like the sitter?

This is not to say that Portrayal neglects the question of verisimilitude or likeness. The whole first chapter is given over to the importance of portraiture’s offering of ‘an illusion of closing the gap on time and space’ (p29) which is the way Pointon describes the claim that portraiture has on our sense of recognition (which she interrogates in relation to a widely reproduced portrait of Garibaldi). She makes a pioneering address to this central aspect of portraiture by introducing Bruno Latour’s notion of factish, a mechanism for navigating between the categories of the fabricated and the real (p32-34). Latour started his intellectual life as a historian of science and has converted this interest into a wider epistemological enquiry into the ‘real’. His work has become a key point of reference in the growing area of ‘material culture studies’, which combines anthropological as well as more conventionally historical methods to study the meaning and use of things. As described in Portrayal, Latour’s category of factish can be used for any object that is so well-fabricated that it appears autonomous, or existing independently of the process of its making.  Pointon uses this as a leaping off point for exploring the portrait as a factish in the context of a historical novel by Joseph Roth, The Radetzky March (1932). She generates an impressive literary analysis of the narrative functions of portraits in the novel, which allows her to conclude on the point that their significance is in use rather than depiction; but there are some more interesting, if less developed, points here about how portraits exist within certain conceptions of history and narrative.

Using the concept of factishness rather than likeness to understand the portrait has the salutary effect of making every part of the image – background, foreground, minor accessories – interesting and powerful. The significance of this really comes to fruition in Chapter 4, ‘Accessories in portraits: stockings, buttons, and the construction of masculinity in the eighteenth century’. Pointon’s interest in ‘the interplay between two material practices…that of commissioning, painting and consuming portraits and that of purchasing and consuming dress’ (p127) results in a fascinating exposition of the important role that men’s dress played in the communication of social status (how fashionably coloured, and carefully made, were your stockings?) as well as their use in making discreet references to sexual prowess (both well-sheathed legs and proud, thrusting buttons gave metaphorical service). We are invited to reflect anew on the male leg and its insistent presence in the visual field of eighteenth-century portraits. In chapter 3, ‘Adolescence, sexuality and colour in portraiture: Sir Thomas Lawrence’, Pointon explores a range of considerations and visual strategies that were available to Lawrence for depicting teenagers, drawn, for example, from artworks by Van Dyck and Hogarth. She offers an admirably frank evaluation of the importance of men’s (clothed) genitals in Regency portraits, and invites us to reflect on the nuances of Lawrence’s use of spots of crimson in creating images of youthful masculinity. My brief summaries flatten the arguments, which are rich with references to the manufacturing processes of dress, the texts of personal correspondence, the eighteenth-century use of letter seals, satirical prints, the novel Tristram Shandy, methods for the construction of buttonholes, etcetera. It is in the interplay between the discussions of the portraits and this extensive range of references that the arguments come to life.

The limitations on examining facial likeness as the primary focus of portraiture is demonstrated in Chapter 2, the original and challenging ‘Slavery and the Possibilities of Portraiture’. The chapter confronts head on the difficult question of how to determine when a particular item may or may not be called a portrait. This is not always an easy question to answer, and the visual mechanisms by which a black subject who was in all likelihood a slave can be rendered as a diminished subject within a portrait are explored in a variety of group and individual portraits from the early modern period. These reflections lead Pointon to explore the significance of place and setting in portraits in serving to identify someone who is fully a subject, since they properly belong ‘in that place’ in a way that slaves, who are traded and sold, can never do. Pointon concludes with a counter-intuitive argument that physiognomically detailed images of slaves should not be read as recognitions of their subjectivity, but as strategies for their greater objectification and as a means of domination.  She sustains with reference to Marina Warner’s explication of the mirror as a motif of diminution, carefully dispensing with the psychoanalytical models of mirroring as a mechanism for idealization which is proposed by Freud and Lacan.

The mirror comes up again in the final chapter, ‘The Skull in the Studio’, which collects an amazing range of artworks under the banner of self-portraiture to explore the expanding means by which artists address the subject of mortality through portraiture. As well as conventional self-portraits by R.B. Kitaj and Linda McCartney, Pointon examines an oil-on-canvas by Derek Jarman that resembles a Pollock drip painting, and a sculpture made of fingernail clippings by Tim Hawkinson. As in the other chapters of this book, this final chapter extends the notion of where a likeness might reside and thus, what a portrait might be or look like. But if a portrait might look like a bird skeleton, or a cottage door, or a man’s stockinged calf, then what does a portrait not look like, and what are the limits of portraiture? This is where Pointon’s book raises more questions than it answers. In a wide-ranging introductory discussion of the varieties of portraiture, which touches on diverse examples such as portraits of the Buddha and those from antiquity, Pointon suggests that portraiture is only properly found ‘in societies where the individual is valued for him or herself’ (p18). She later repeats this assertion in relation to a discussion of the role of Protestantism in promoting portraiture (p30), arguing that the proscription against idolatry is less significant than secular values of individualism. But what kind of social is it, that underwrites the significance of the individual? On page 30, it is secular society; on p19 it is one that enjoys material abundance; later it is one that concerns itself with chronology and (Whiggish) notions of historical sequence (p35-36). It is likely that Pointon’s description of the social landscape that produces the individual at the heart of a portrait is justifiably elliptical; but since Portrayal advances the social as the text through which the individual is written, the character of the social is more significant, and here more richly elaborated, than the text recognizes.