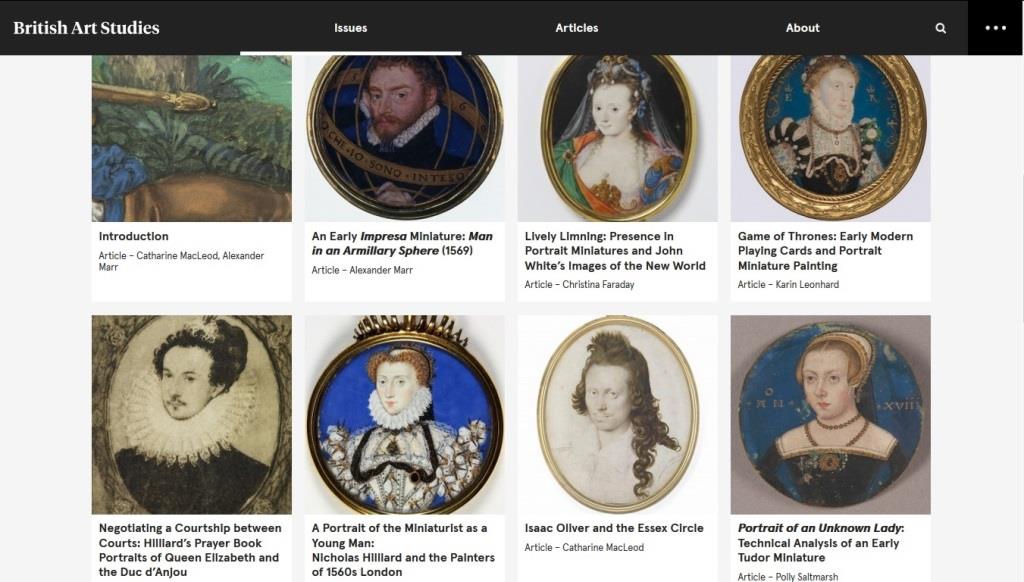 The essays in this special issue of British Art Studies arose in part from a two-day international conference on Nicholas Hilliard and Isaac Oliver, sponsored by the Paul Mellon Centre and the University of Cambridge, and hosted by the National Portrait Gallery to coincide with the exhibition Elizabethan Treasures: Miniatures by Hilliard and Oliver (2019).

The articles that make up this special issue of British Art Studies represent a variety of subjects and approaches, but they are linked together by their presentation of multi-disciplinary information gleaned from a renewed focus on the objects themselves. Close examination and consideration of miniatures in a variety of contexts has revealed new connections, meanings, and functions, and it has opened up further questions and potential avenues of enquiry. In recent decades, the development of new non-invasive techniques for the examination of works of art and their constituent parts has enabled revelations about the way miniatures were made. This volume presents important discoveries in this area. These have sometimes led to new attributions, but have also provided important information about materials and techniques, how artists and their workshops operated in Elizabethan and Jacobean England, and the relationships between works of art and the various instructional treatises that were circulating at the time. This is an area with expanding potential to reveal more about, for example, the links between English miniatures and Continental practice, and miniature painting in other genres, such as manuscript illumination.

British Art Studies provides an innovative space for new peer-reviewed scholarship on all aspects of British art, architecture, and visual culture in their most diverse and international contexts. It is co-published by the Paul Mellon Centre for Studies in British Art, London, and the Yale Center for British Art, New Haven, and reflects their dynamic research cultures. Link to special issue >>