You are here: Home News E. R. Hughes’ Portrait of Bell and Dorothy Freeman Acquired by the Geffrye Museum, by Emma Hardy

Emma Hardy, Collections Manager, The Geffrye Museum of the Home 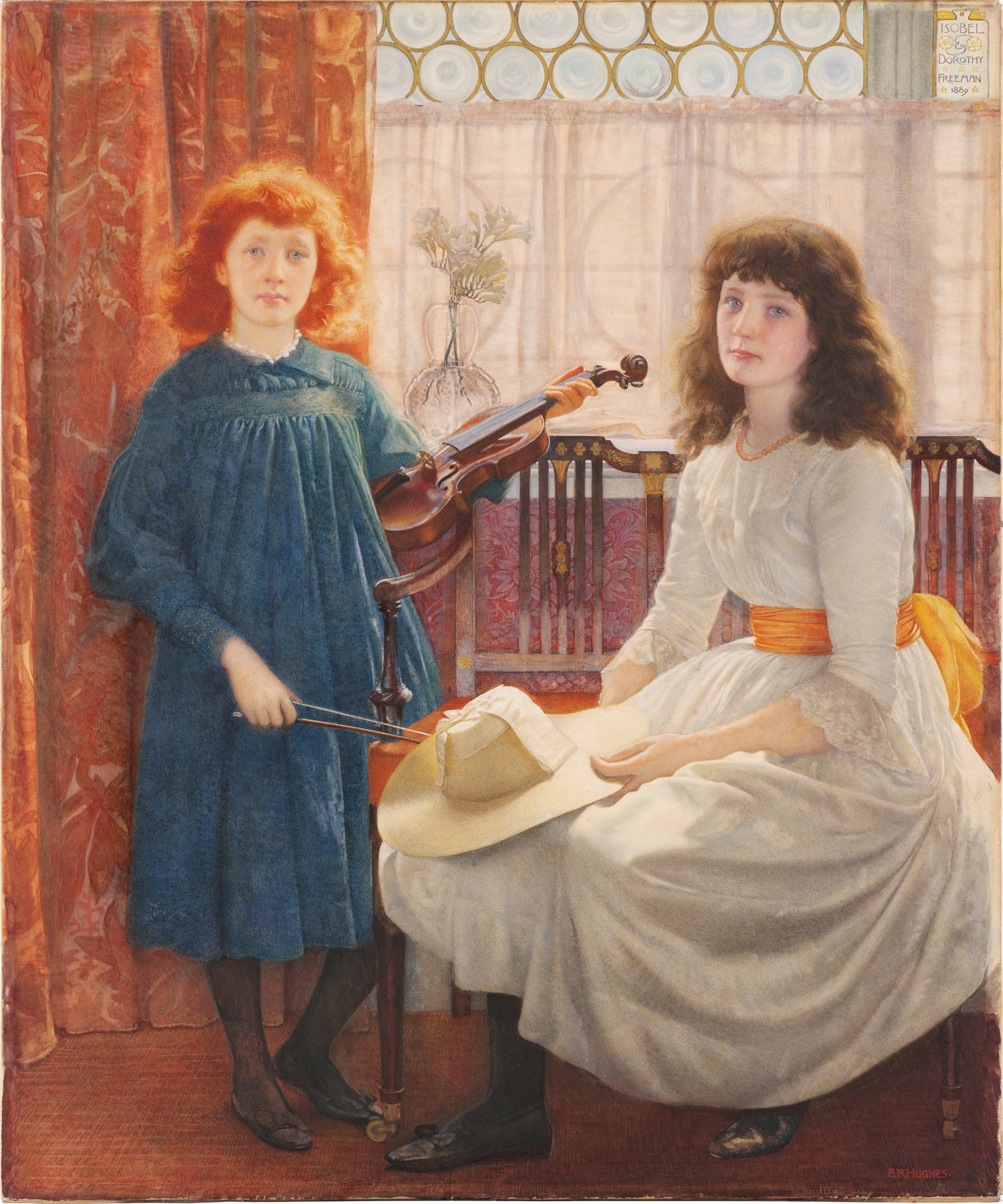 Portrait of Bell and Dorothy Freeman, watercolour on paper, by Edward Robert Hughes, signed and dated 1889. © The Geffrye Museum of the Home, London. Purchased with the assistance of the Heritage Lottery Fund, the Art Fund and the Arts Council England/Victoria and Albert Museum Purchase Grant Fund.

The Geffrye Museum of the Home has recently purchased a beautiful, large-scale watercolour portrait of two young sisters in a domestic interior by the late Pre-Raphaelite artist Edward Robert Hughes.

Today Hughes is best-known for his ‘blue’ paintings – a series of spectacular, highly finished watercolours on literary and mystical themes, featuring winged allegorical figures against luminous blue skies, completed towards the end of this life. However, during his lifetime, his critical reputation was largely based upon his portraiture, especially his charming images of children.

The girls shown in the painting are Bell (or Isobel) and Dorothy Freeman, the two eldest children of a barrister, George Mallows Freeman and his wife Annie. The eldest son of a chemist with premises in Kensington High Street, G. M. Freeman was educated at Oxford and called to the bar in 1874. Freeman must have accumulated some wealth over the course of his career as in 1908 he was able to purchase the Greyfriars Estate, at Winchelsea, in Sussex. However, when this portrait was painted the family were living at a more much modest property in Regents Park Road, London and it is likely that the painting was originally part of the furnishings of that home.

Although the details of how and why the portrait was commissioned are not known it is clear that the Freeman family had some connections with the art world. Early in his career G. M. Freeman acted for James McNeill Whistler in the notorious Whistler v. Ruskin court case and it is possible that this sparked an interest in art. (The trial was a pivotal moment in the history of nineteenth century art, with leading artists and experts giving testimony, which set out the key debates of the period around the nature and purpose of art.) The Freemans seem to have been on friendly terms with Hughes and he made several further portraits of family members, including a pencil drawing of their younger sister, which is affectionately inscribed ‘To Gwendolen, from her painter man E.R. Hughes July 30 1901’. Gwendolen later married Hilary Lushington Holman Hunt, the son of William Holman Hunt (for whom Hughes worked as a studio assistant, helping the older assist to complete a number of important late works). 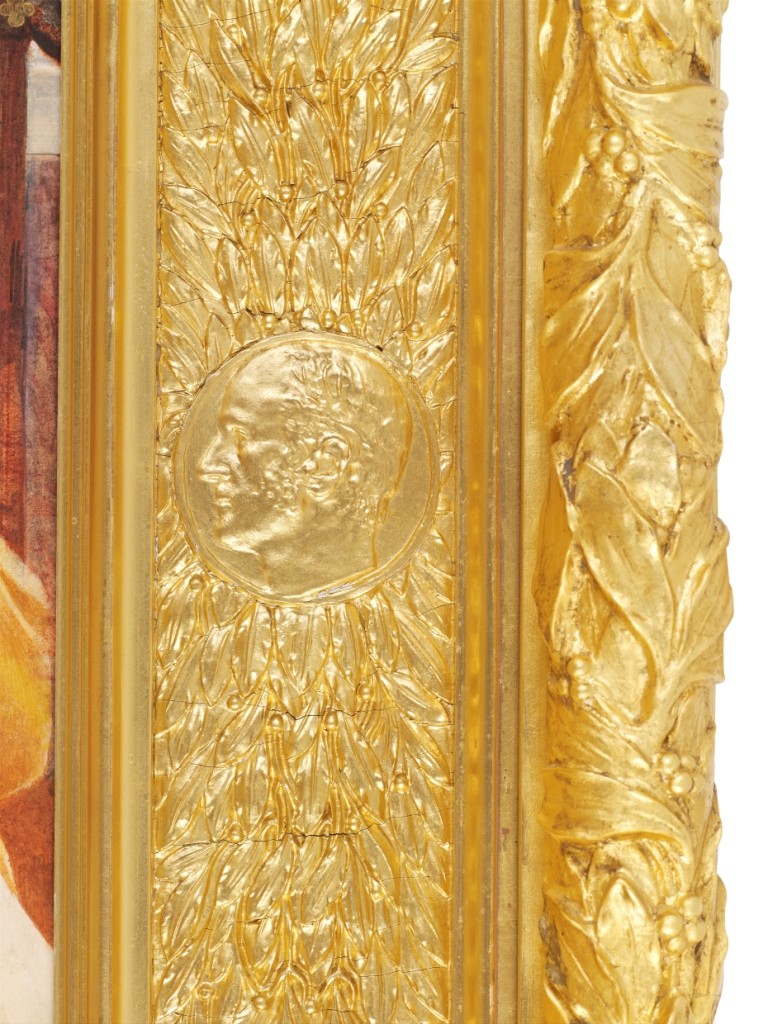 Portrait of Bell and Dorothy Freeman, watercolour on paper, by Edward Robert Hughes, signed and dated 1889 (frame detail). © The Geffrye Museum of the Home, London. Purchased with the assistance of the Heritage Lottery Fund, the Art Fund and the Arts Council England/Victoria and Albert Museum Purchase Grant Fund.

The interior depicted in the painting is furnished in the Aesthetic or artistic taste, which become fashionable among the urban middle-classes, especially in artistic and intellectual circles, as an alternative to more mainstream furnishing choices, from the 1860s onwards. Artistic features include the window with small round leaded lights, heavy velvet curtains in a rich but muted red, matting on the floor and the simple arrangement of white freesias in an ‘art glass’ vase on the windowsill. The wallpaper, which can be seen just behind the settee, is a pattern called ‘Sunflower’, designed by William Morris in 1879 and manufactured by Jeffrey for Morris & Co. The design includes the quintessential Aesthetic motifs of sunflowers and lilies, with trailing vines and bunches of grapes.

The painting may be a representation of the Freeman family’s London home but (so far at least) it has not been possible to confirm that. It is, nonetheless, significant that the sisters are shown in a domestic space with strong artistic overtones. In domestic portraits the interior setting and the objects depicted are used to construct identities, they act as markers helping to define the sitters’ (and by extension their family’s) social position, tastes and interests. The girls’ place within the family is alluded to in the decoration of the frame, which incorporates portraits of their parents, in the form of a pair of relief roundels flanking the painted portrait.

Bell and Dorothy were born in 1875 and 1879, respectively, so they are shown here at about fourteen and eight years of age and the painting can be interpreted as a meditation on the different stages of growing up. The younger girl appears at ease, looking directly out at the viewer, while her older sister is much more reserved and self-conscious. Bell’s white dress, the flowers on the windowsill and the halo-like effect of the light on their hair can all be read as symbols of innocence and purity. The picture marks a particular moment in the Freemans’ family life but it also has a wider resonance as a touching and insightful image of childhood. 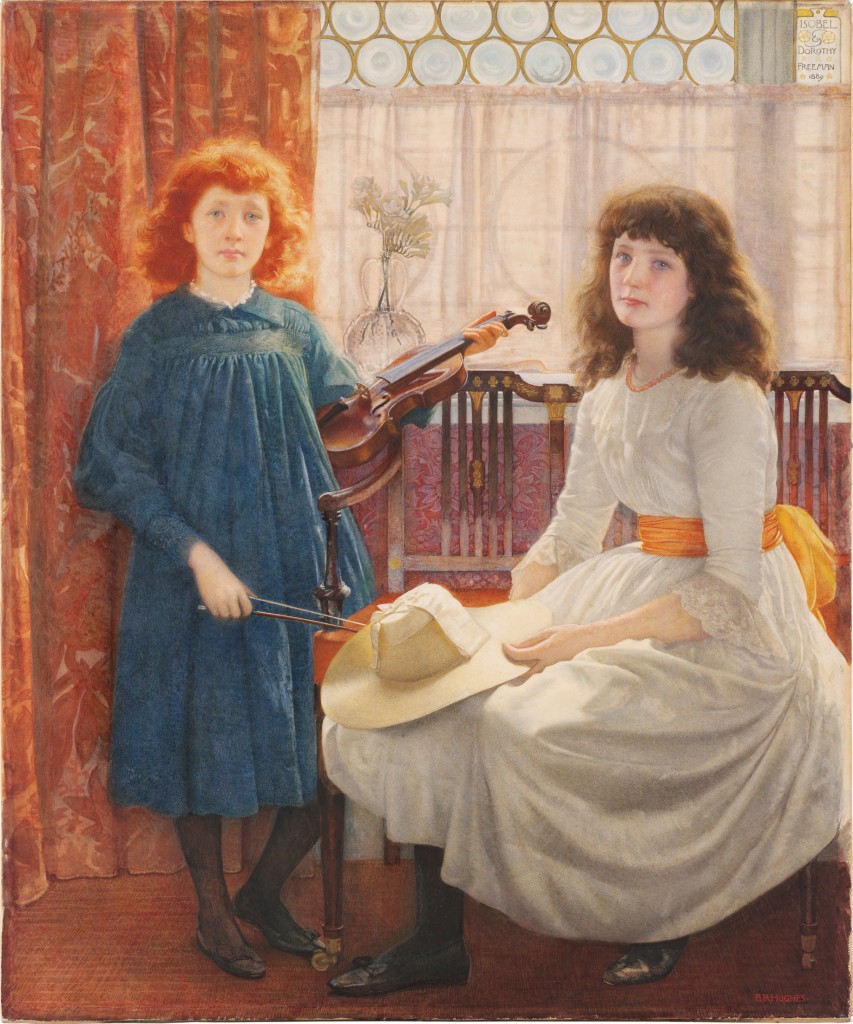 Portrait of Bell and Dorothy Freeman, watercolour on paper, by Edward Robert Hughes, signed and dated 1889. © The Geffrye Museum of the Home, London. Purchased with the assistance of the Heritage Lottery Fund, the Art Fund and the Arts Council England/Victoria and Albert Museum Purchase Grant Fund.

Hughes’s portrait of Bell and Dorothy is an important addition to the Geffrye Museum’s collection. The Geffrye focuses on the history of the home and its main permanent displays are a series of period rooms representing ‘middling’ London homes from the seventeenth century to the present day. In addition to a wide range of domestic objects the museum collects paintings depicting homes and gardens. As well as giving detailed information about furnishings and decoration, these pictures through their representation of domestic space provide insights into contemporary attitudes, perceptions and values relating to home and to middle-class tastes, behaviours and identities. Domestic portraits, like the portrait of the Freeman sisters, also have a particular role within the context of the Geffrye’s displays as they help to ‘people’ the galleries, directly connecting visitors with the people who would have inhabited the homes represented by our period rooms.

Bell and Dorothy Freeman by Edward Robert Hughes was acquired by the Geffrye Museum of the Home with the support of the Heritage Lottery Fund, the Art Fund and the ACE/V&A Purchase Grant Fund