You are here: Home News Nuns at Douai and Coughton by Dr Mary Addyman

Nuns at Douai and Coughton by Dr Mary Addyman 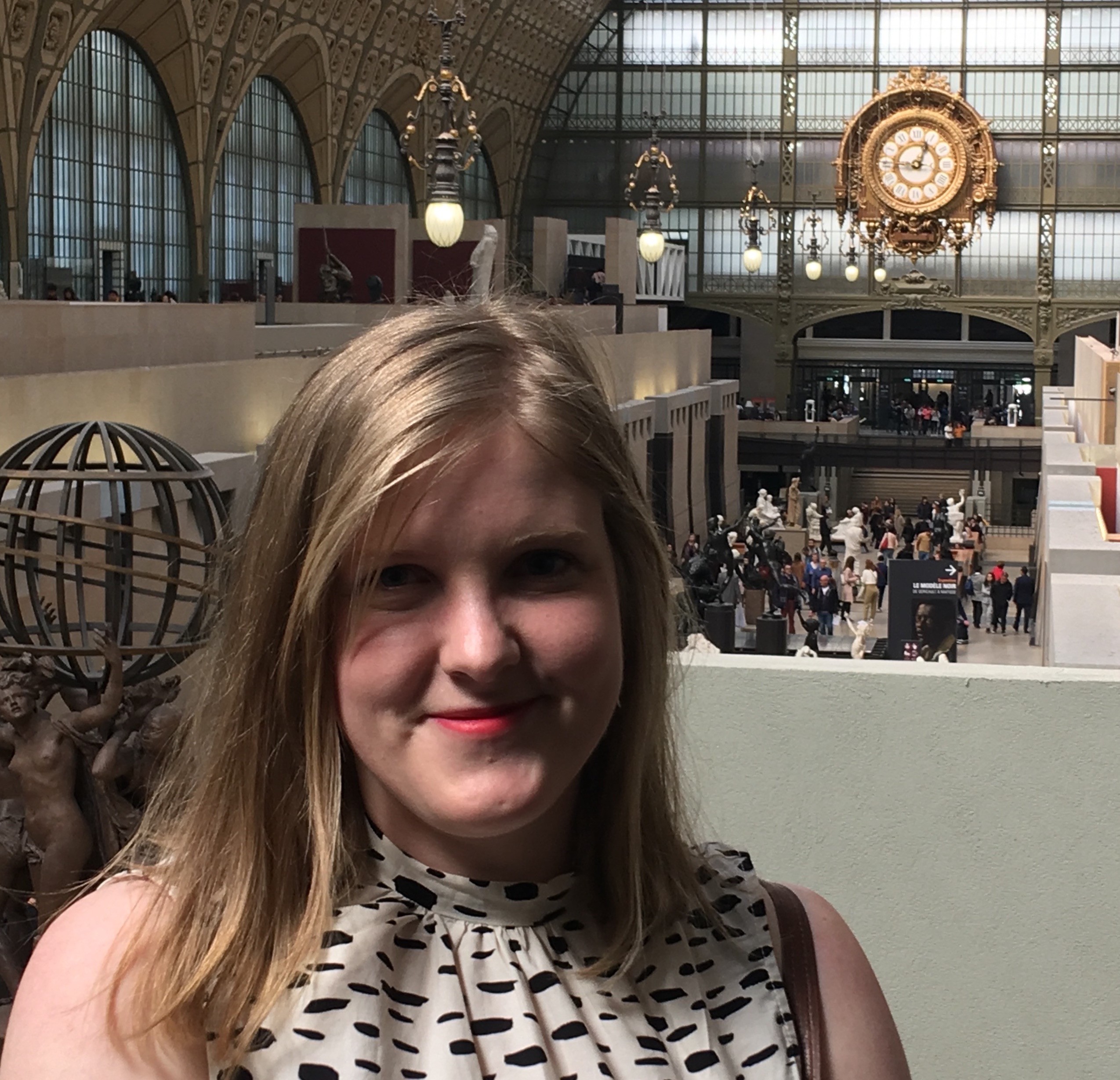 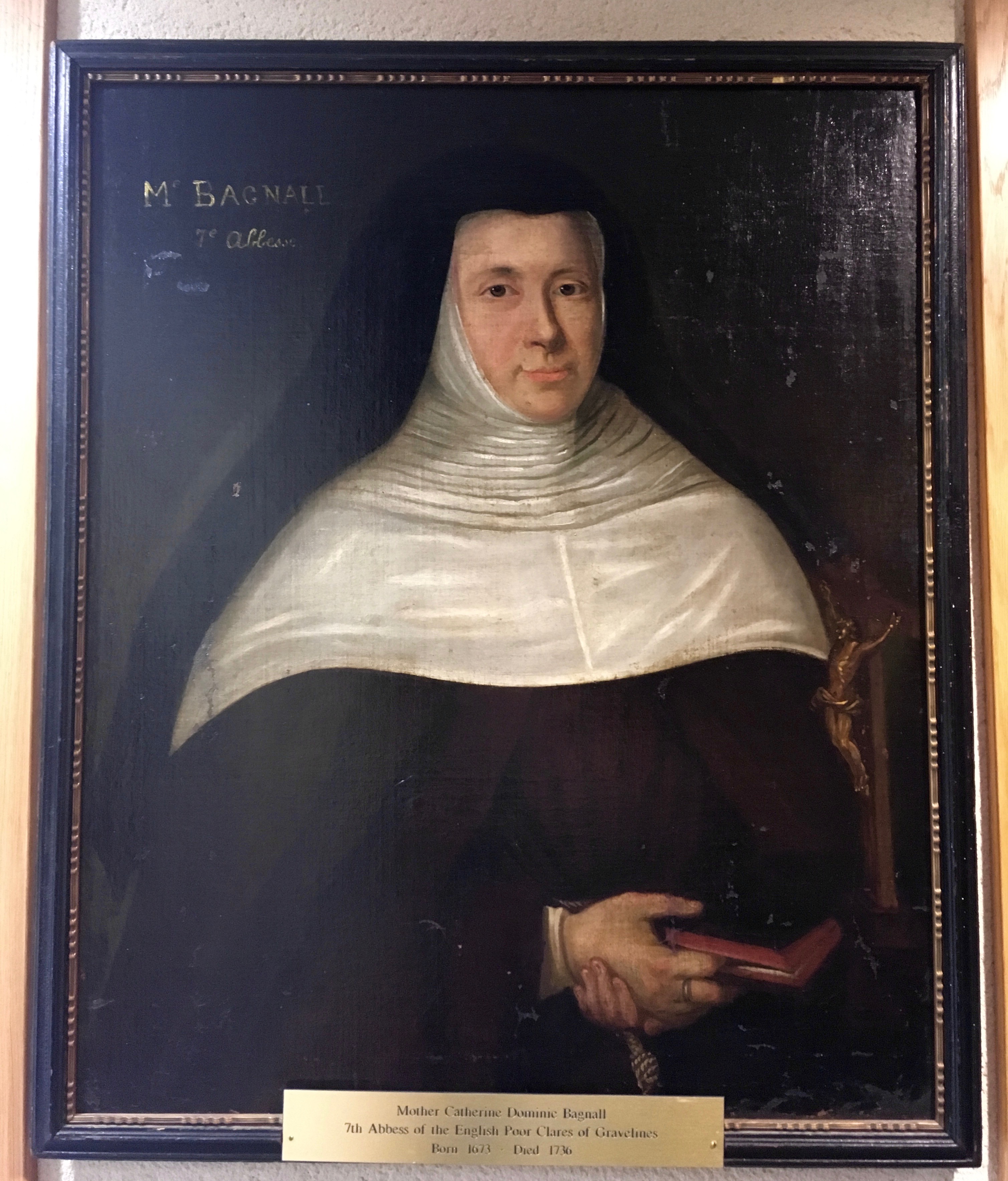 In my job, time to reflect and slow down can be hard to come by, and so the opportunity to spend the day thinking and learning about Catholic portraiture with a coterie of UBP delegates was one not to be missed. I work as the House Steward at Coughton Court in Warwickshire, a National Trust property that is the ancestral home of the Catholic Throckmorton family. One of our finest assets is our collection of family portraits, spanning from the sixteenth century to the 1990s. My colleagues and I were just embarking on a project to produce a visitor guide to the portraits when the UBP study day was advertised. As an art history novice, it was the perfect chance to learn more about the context of Catholic portraiture and better situate our remarkable collection.

Douai Abbey, the first stop on our tour, is a Roman Catholic monastery of monks of the English Benedictine Congregation. It was founded in Paris in 1615, removed to Douai in Flanders post-Revolution, and settled in Woolhampton, Berkshire in 1903. Many Throckmortons were educated at Douai in Paris, and the Abbey’s monks continue to serve the church of Saints Peter, Paul, and Elizabeth, the Throckmorton family’s private chapel, within Coughton Court’s grounds. Our collections at Coughton include a fragment of carving, purportedly part of a Douai altarpiece, and my colleague and I were keen to learn more about the connections between the two places. The collections at Douai Abbey were expertly showcased for us by Abbot Geoffrey Scott.

Abbot Geoffrey welcomed us warmly to the Abbey, a magnificent architectural mish-mash brimming with portraiture. He highlighted a collection of oil portraits from the seventeenth and eighteenth centuries, found in a loft space at the English College, Douai, France, in 1818. These portraits of ecclesiasts and benefactors now line the refectory and corridors at the Abbey, and bring a sense of history and lineage to the modern building. But it was the holdings of the library and archive which were, to me, the real highlight. 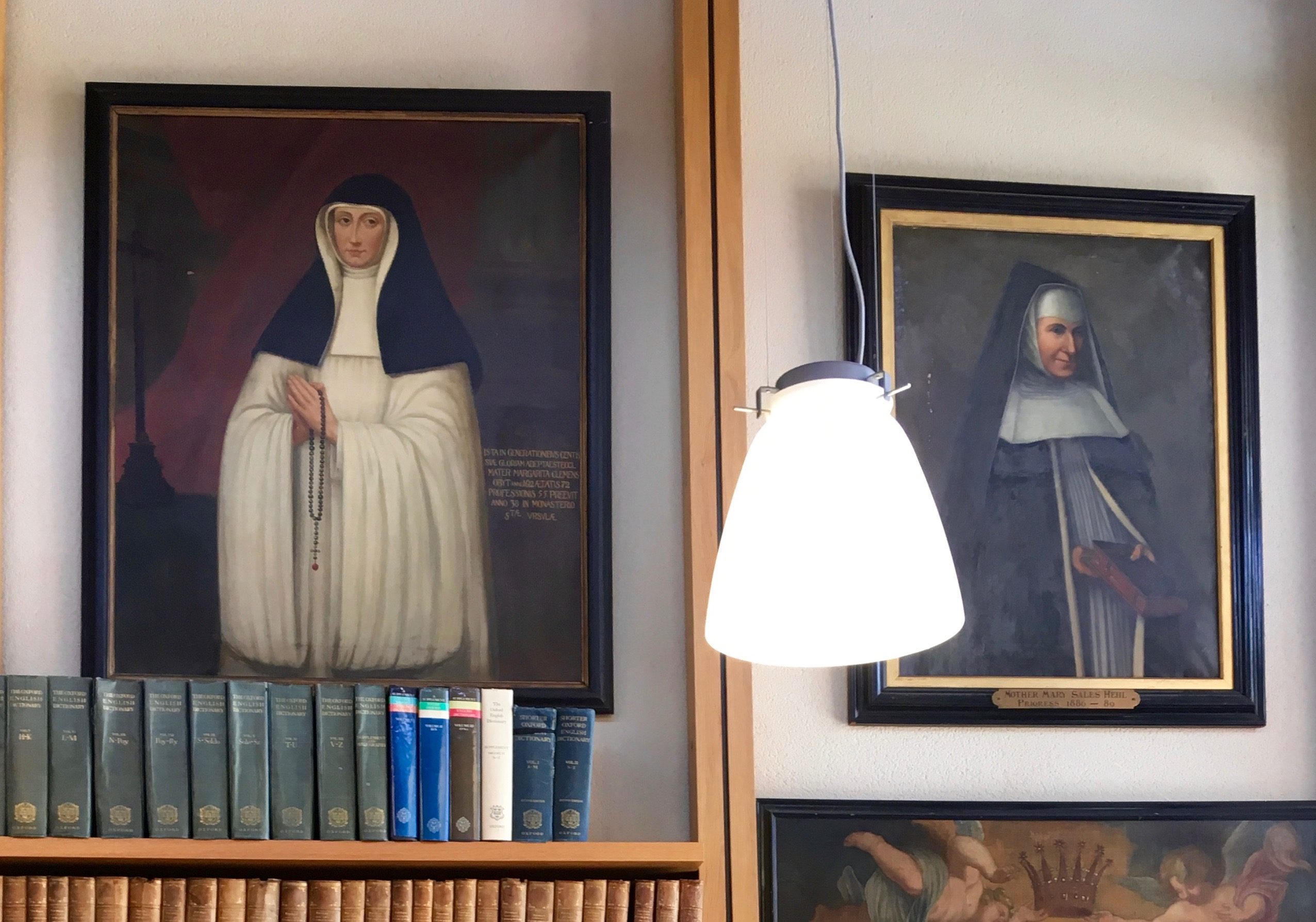 Portraits in the reading room of Mother Margaret Clement (1540–1612), and Mother Mary Sales Hehl, both English Canonesses of St Augustine. Image taken by the author

The library is a bright space that welcomes researchers. Abbot Geoffrey explained that 16 religious orders deposit at Douai library, including communities of Benedictine and Carmelite nuns. The holdings include collections of rare books, plate, textiles, sculpture and coins, as well as archival materials and portraits. The reading room is lined with these portraits, including several striking works depicting nuns of various communities. One of these, Mother Margaret Magdalen (1591–1668) was a Throckmorton, sister of Sir Robert, the 1st Coughton baronet.

My attention was seized particularly by the nuns at Douai because Coughton has its own remarkable nun portrait. Hanging in the Blue Drawing Room of the house is a portrait of Anne Throckmorton by Nicholas Largillière (1656–1746) (see below). Anne (1664–1734) was a choir nun and Prioress of the Augustinian convent in Paris between 1720 and 1728. Her nephew Robert, 4th baronet of Coughton, commissioned the portrait in 1729, along with those of his sister, Elizabeth, and cousin, Frances Wollascott, both also Augustinian nuns in Paris.§ The set of three hung together at Coughton, alongside Largillière’s portrait of Sir Robert himself, until the collection was broken up in the 1960s. Only Sir Robert and his sister remain at Coughton – Elizabeth is in the National Gallery of Art in Washington, and Frances resides in the Art Gallery of South Australia. 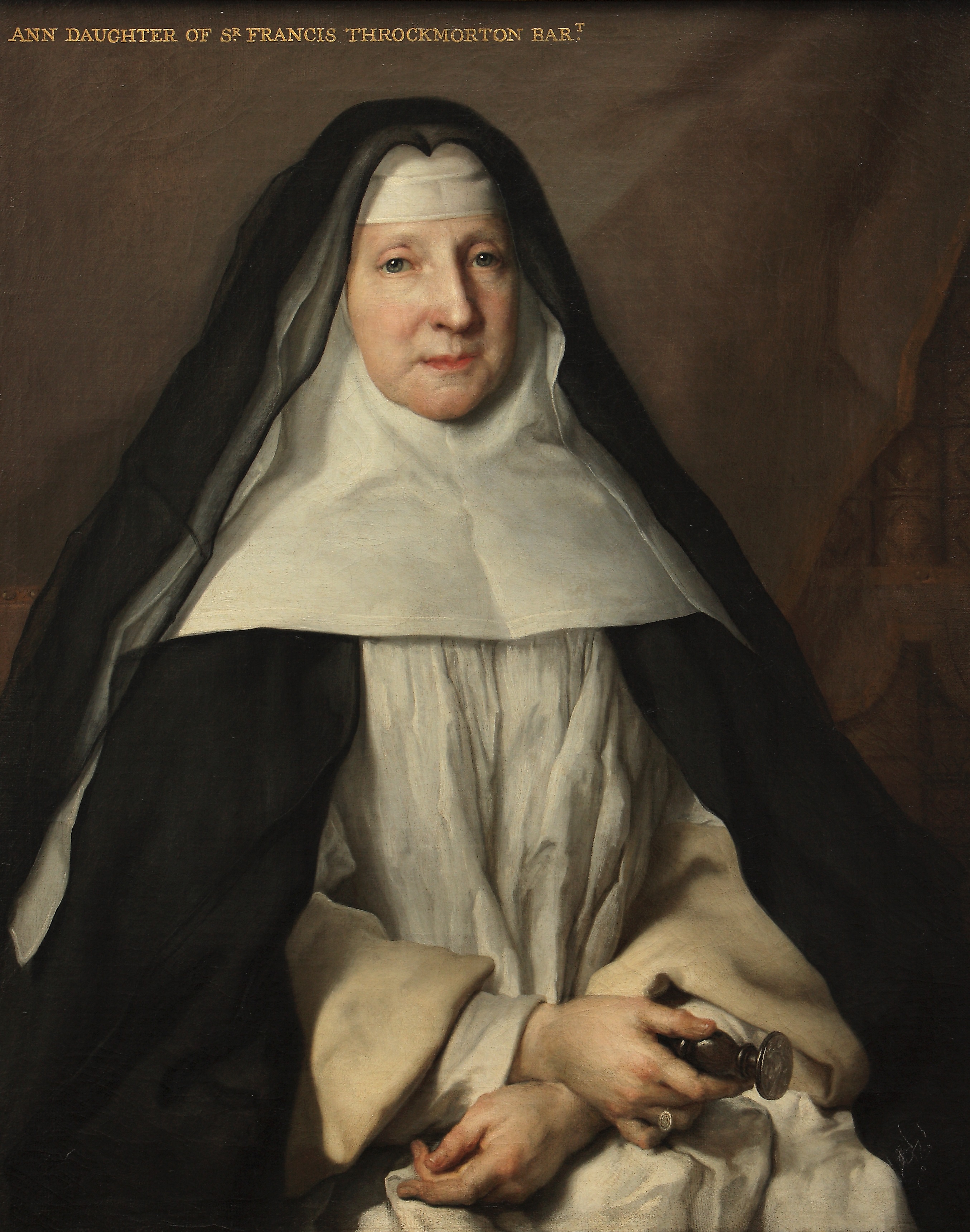 The Largillière portrait of Anne has long been one of my favourite objects at Coughton. It is beautifully executed, and the textural fabrics of Anne’s habit are delicately presented. Her expression, I think, is solemn but kindly, and she carries the seal of her position, a nod to her position of authority.

Seeing the portraits at Douai prompted me to think about the familiar Largillière painting as part of a tradition of nun portraits. I learned from Geoffrey Scott’s article on the subject that Sir Robert’s father (another Sir Robert) had hanging in his home at Weston Underwood four portraits of his nun ancestors.♣ That seems suggestive—perhaps the younger Robert commissioned the Largillière portraits as a means of continuing this tradition, as well as recording his relations’ standing for posterity, as portraits commissioned by religious communities themselves would have done. Such finely wrought depictions of devotion might have acted to bolster the family’s identity as part of a lineage or network of piety and righteousness.

Indeed, far from being cloistered and forgotten, English nuns on the continent had a degree of political agency, as they could further their families’ interests abroad and educate the next generation of Catholics; Anne Throckmorton tutored several of her nieces at her Abbey, only some of whom went on to become nuns themselves. Portraits like these, Kate Gibson argues, act as ‘potent symbols of the [Throckmorton] family’s Jacobitism and piety’, as well as ‘manifestations of the idea that all family members, of either gender, were responsible for furthering the Catholic cause’.∅ Far removed though she may have been from Coughton, Anne Throckmorton played an important role in sustaining and furthering the family’s Catholicism.

At Coughton, Largillière’s portrait of Sir Robert hangs pride of place above the fireplace, with the smaller portrait of his aunt Anne to the left. Nearby, two modern, framed prints of her nieces are displayed to complete the Largilliere set, but we rarely talk about the significance of this set of paintings as a means of upholding and furthering the Catholic cause, nor about the wider political context of English nuns on the continent in the eighteenth century. Many Throckmorton women became nuns—at least eight across three successive generations—and the visit to Douai has prompted me to investigate more closely what that meant, both for the women as individuals and the family as a whole.

§ The Throckmortons, it seems, were the exception rather than the norm, as Sir Robert had the finances to commission one of the greatest portrait painters of the French and Jacobite courts to depict his relations, whereas other English families made do with dolls or miniatures of their nun relations, sent back across the Channel. See Geoffrey Scott, ‘The Throckmortons at Home and Abroad, 1680–1800’, in Catholic Gentry in English Society: The Throckmortons of Coughton Court from Reformation to Emancipation, ed. Peter Marshall and Geoffrey Scott (Farnham: Ashgate, 2009), pp. 171–211 (p. 191).