You are here: Home News The Lost Portrait of Charles Dickens at 48 Doughty Street by Louisa Price 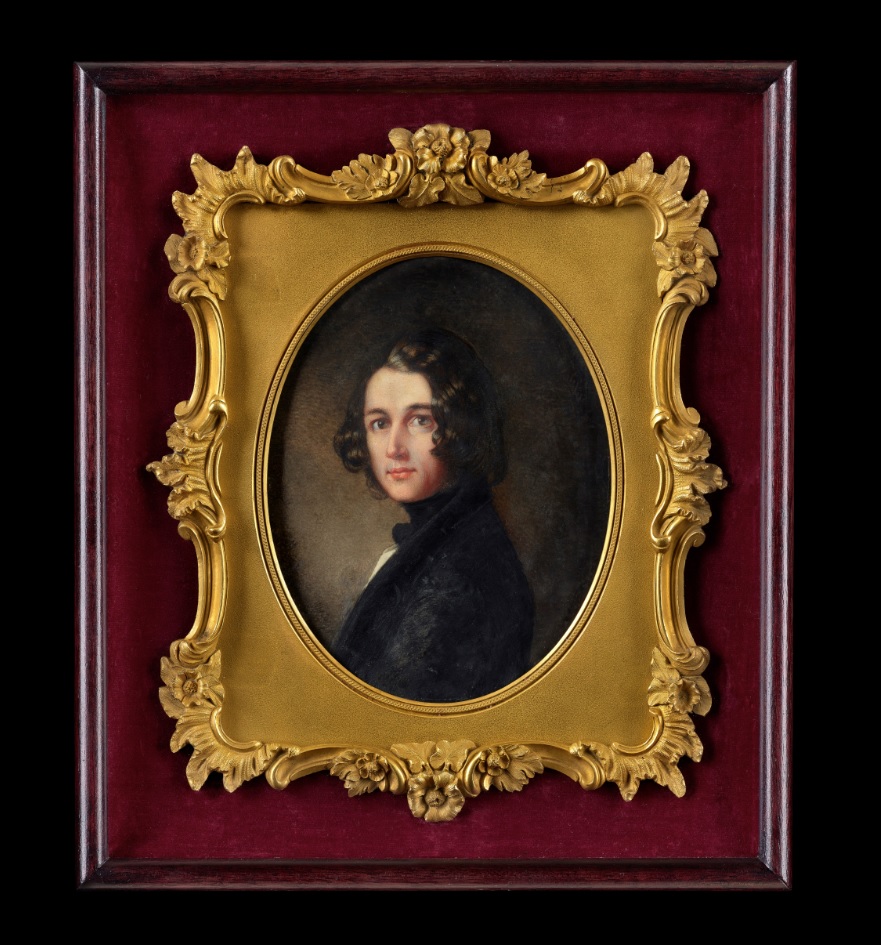 Following a successful fundraising campaign, the Charles Dickens Museum has raised £180,000 to acquire a ‘lost portrait’ of Charles Dickens, painted by Margaret Gillies in 1843 when the author was only 31 years old. We are now preparing to put this small, striking portrait on display in the museum, which is based in 48 Doughty Street; the writer’s only surviving family home in London. This acquisition will have a significant impact on interpretation in the museum: drawing visitors in with the fascinating story of its discovery, enriching our ability to explore the idea of Dickens as a social campaigner and challenging the perception of the novelist as a bearded old man.

There is no doubt the story of the portrait’s discovery, 174 years after it was last seen publicly, captivates audiences and will remain central to how we interpret the work. This extraordinary tale is well documented in a podcast, catalogue and short film produced by the Philip Mould Gallery who made the initial discovery. We worked closely with Mould and his team after the portrait was found in South Africa, amongst a box of trinkets in a house clearance sale. Items from our collection helped trace its story, such as letters by Dickens confirming he would sit for Gillies, and an 1886 letter from the artist noting she had ‘lost sight of it.’ We displayed it for a week in May this year to raise awareness for our fundraising campaign and saw visitor numbers spike as people flocked to see the little picture that had grabbed headlines. 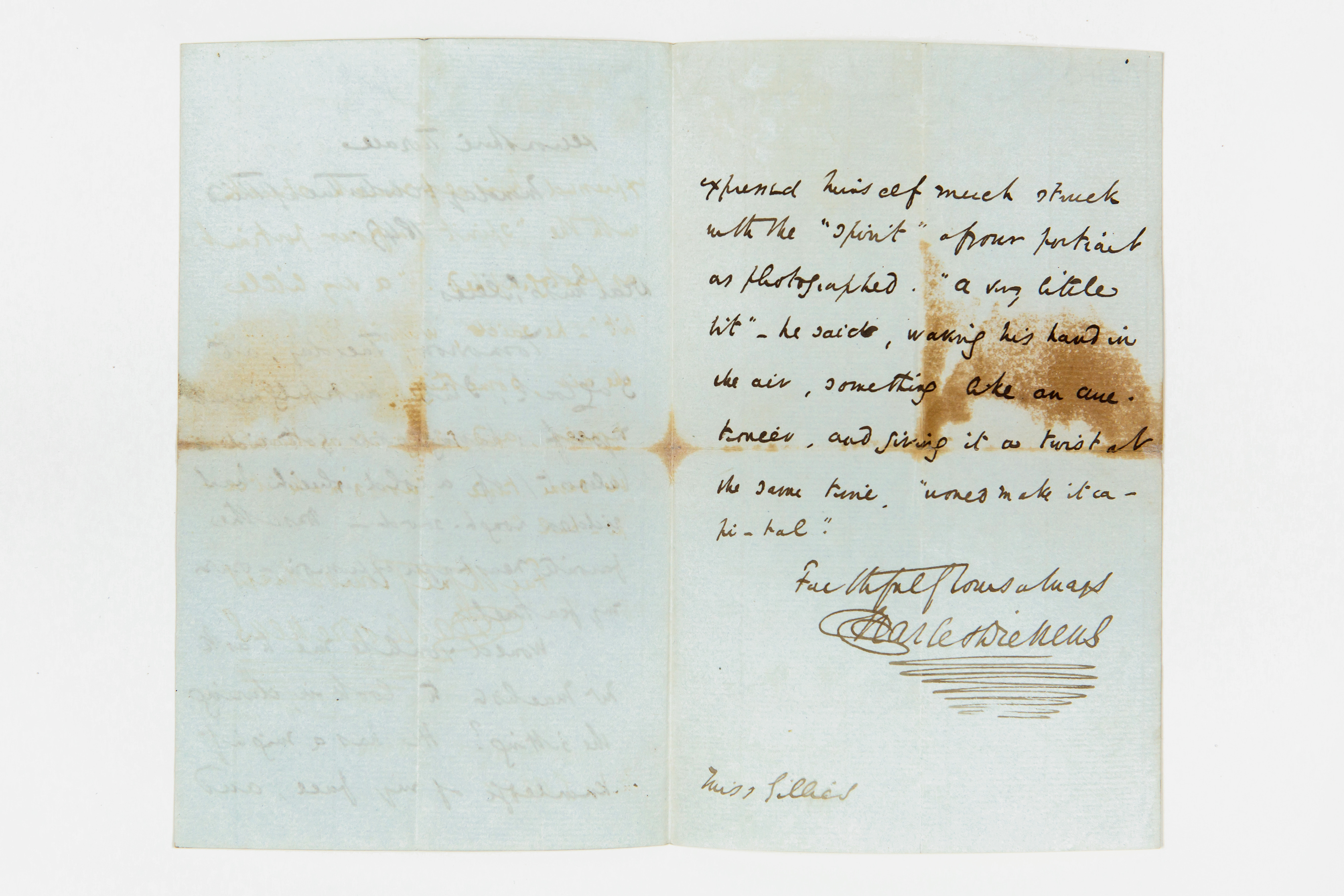 Dickens writes to Margaret Gillies on 23 October 1843 about a portrait sitting, noting his friend and artist Daniel Maclise is ‘much struck with the “spirit” of your portrait’. © Charles Dickens Museum 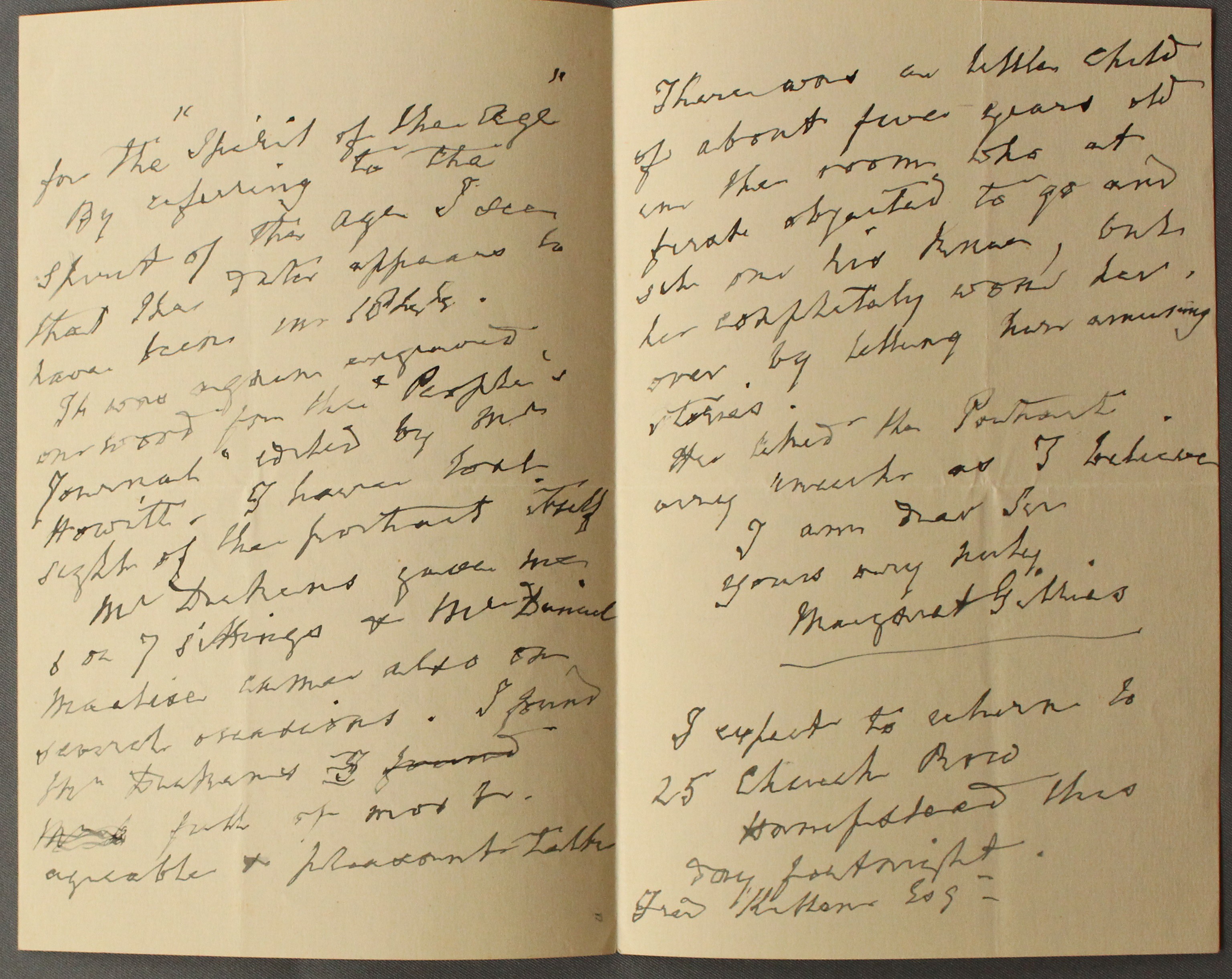 Margaret Gillies writes to Frederic Kitton on 8 July 1886, reminiscing about the portrait she painted of Dickens. She recalls he gave her 6 or 7 sittings and he was ‘a most agreeable and pleasant talker’. © Charles Dickens Museum

We wish to bring the story of Dickens as a social campaigner to the fore at 48 Doughty Street; it features in our Education offering but needs greater attention in our permanent displays. We anticipate this portrait will be central to redressing this imbalance, painted as it was at a pivotal moment in the novelist’s life, leading up to the publication of one of his most radical works, A Christmas Carol.

1843 was a significant year for Dickens as he grappled with his rising fame and how he could best use it to respond to social issues that were increasingly concerning him. He began writing a tract on child labour but soon realised that a story would have more impact. Dickens quite rightly anticipated A Christmas Carol would deliver a ‘sledgehammer blow’ with ‘twenty thousand times the force’ of a political pamphlet. How poignant that during the period he was writing the Carol, he was also sitting for an artist known for her radical views. The previous year, Gillies provided the illustrations for the Royal Commission of Inquiry into Children’s Employment in Mines and Manufactories. Dickens had read the report and, like many others, was outraged by it.

The portrait was actually commissioned to be turned into an engraving for A New Spirit of the Age – a book about notable cultural figures of the day. Fittingly for the publication, Gillies’ portrait of Dickens captures the ambition of a man on the cusp of something extraordinary, with the weight of responsibilities and possibilities hanging over him. 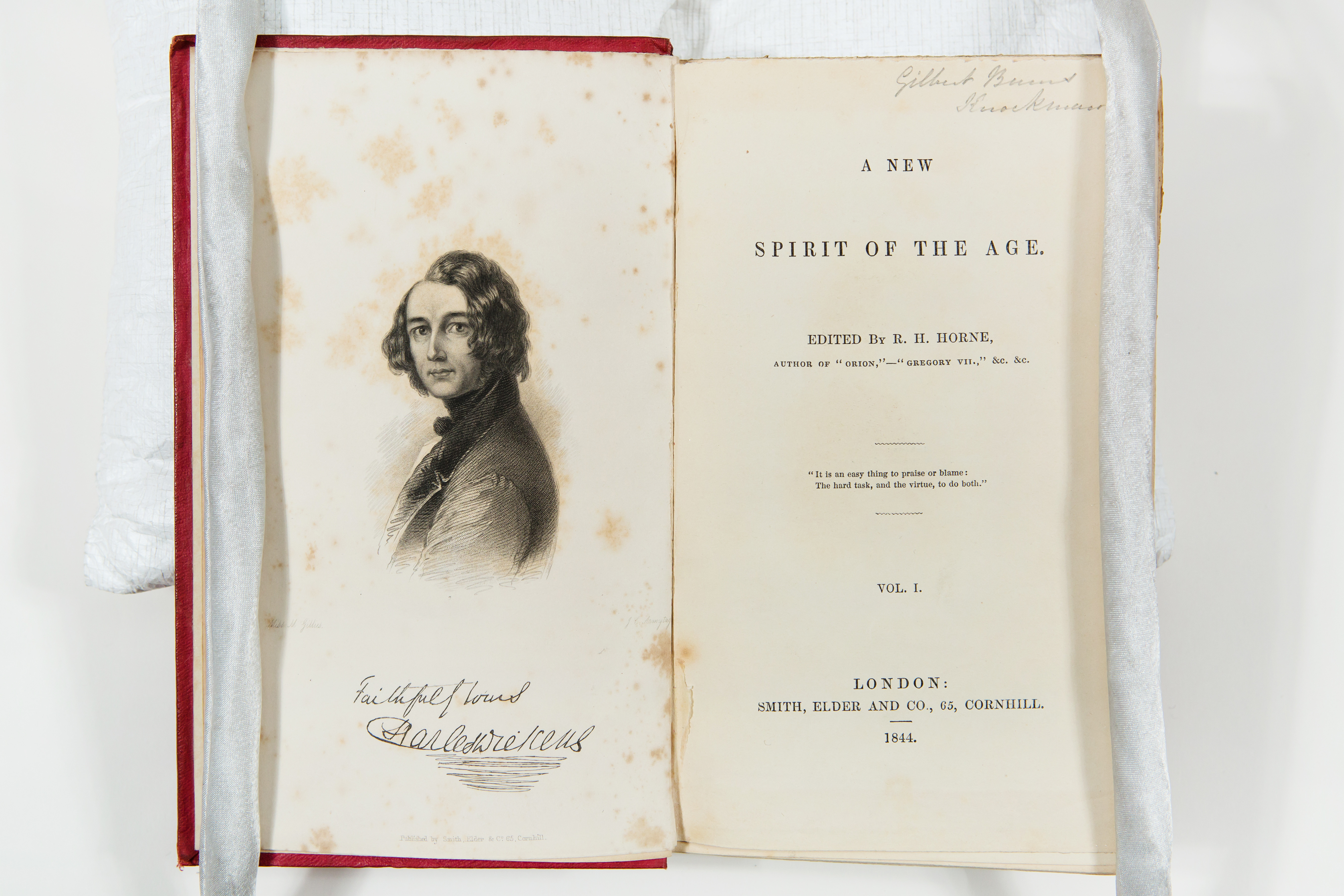 It has not taken long for the Gillies portrait to become a key feature in our museum shop. The merchandising of the portrait is indicative of its importance to our institution: it shows the Dickens of Doughty Street we want people to discover here – a young man and a father of a growing family at the beginning of his career.

Dickens’s good friend and biographer John Forster noted the contrast between young Dickens and the image embedded on the public consciousness by the end of his life: ‘Very different was his face in those days from that which photography has made familiar to the present generation’ (Philip Collins (ed.), Dickens – Interviews and Recollections, volume I, Palgrave Macmillan: London, 1981, 18).

Even today, it is the old man with unruly hair and beard that most people would revert to when asked to describe the author. For many of our visitors, ‘Dickens’s Dream’ by Robert William Buss is the most loved and familiar image of the author. Buss’s portrait is based on a photograph by John Watkins from 1863, showing the novelist with his head down, like he is asleep. Buss’s version of Dickens is in direct contrast to the Gillies portrait, captured in the intimate medium of a miniature and showing a handsome, curly haired and clean shaven man, with a direct gaze that feels personal and full of private meaning.

We anticipate the Gillies portrait will begin to redefine our visitor’s perception of the novelist. It will be on permanent display at the Charles Dickens Museum, London from the end of October. 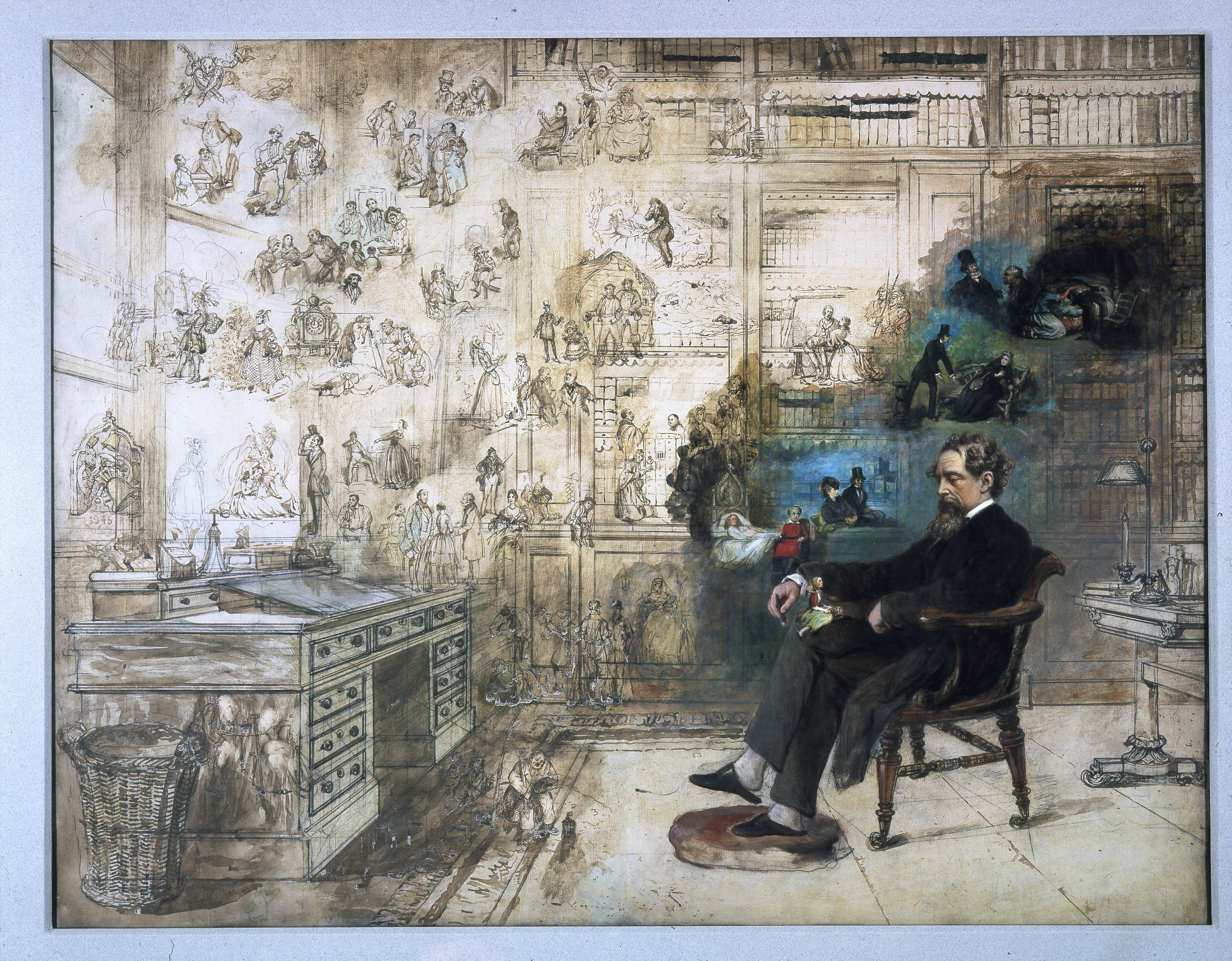