You are here: Home News The power of portraits in context: A study day at Hardwick Hall by Liz Waring

The power of portraits in context: A study day at Hardwick Hall by Liz Waring 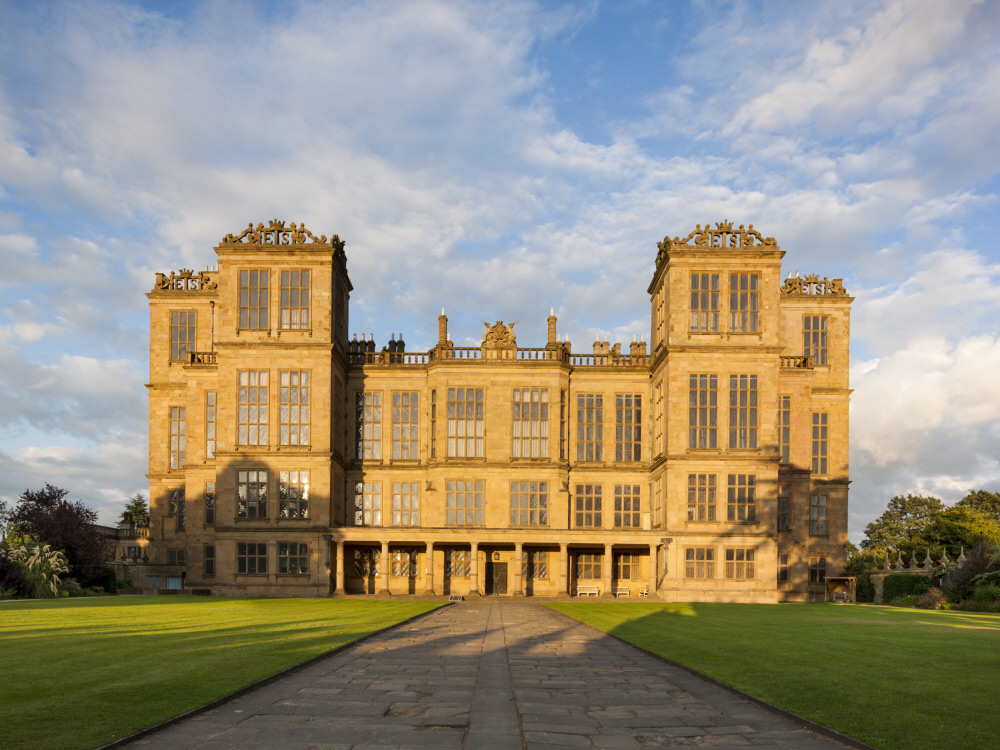 View of the west front of the Hall, seen from the Gatehouse, at Hardwick Hall, Derbyshire © National Trust Images/Andrew Butler

I had been looking forward to the Understanding British Portraits Study Day at Hardwick Hall from the moment it was announced.  Since first encountering ‘Bess of Hardwick’ 12 years ago when I moved to the area I have become something of an enthusiast. Combined with my equally keen interest in 16th and 17th century portraiture, this study day could not have been more perfect and I was certainly not disappointed.

In contrast to the chill in the air outside – and inside – the house, we were given a warm welcome by Nigel Wright the House and Collections Manager and given a tour of the building.  I have visited this Elizabethan ‘prodigy house’ before, but its magnificence never ceases to amaze me. The way it remains unchanged after so many years, you really get a sense of what it must have been like when Bess was alive: ‘Hardwick Hall, more glass than wall’ as the old saying goes. The Hall continues to embody the power and status that Bess achieved during her lifetime of ill-fated husbands and carefully managed funds.

On this particular visit, to my surprise, I was unusually struck by the tapestries in the property. Textiles do not normally fall into the sphere of my research interests, but as you’ll see, they are far more important to the portraits than I had ever considered before and they set the scene for the thoughts and discussion that really struck me during this event.

Some of the tapestries are still hung as Bess would have presented them. The ones in the High Great Chamber hung below a painted plaster frieze of Diana depict the story of Ulysses, while the tapestries in the Long Gallery show Gideon and his triumph over the Midianites. These were bought at a knock-down price from Sir Christopher Hatton and appropriated as Bess’s own, becoming the background for many of the portraits in the house. Others, such as the 17th century examples on the staircase, were brought over from Chatsworth and added later by the 6th Duke of Devonshire during the 19th century when such décor became the fashion again. 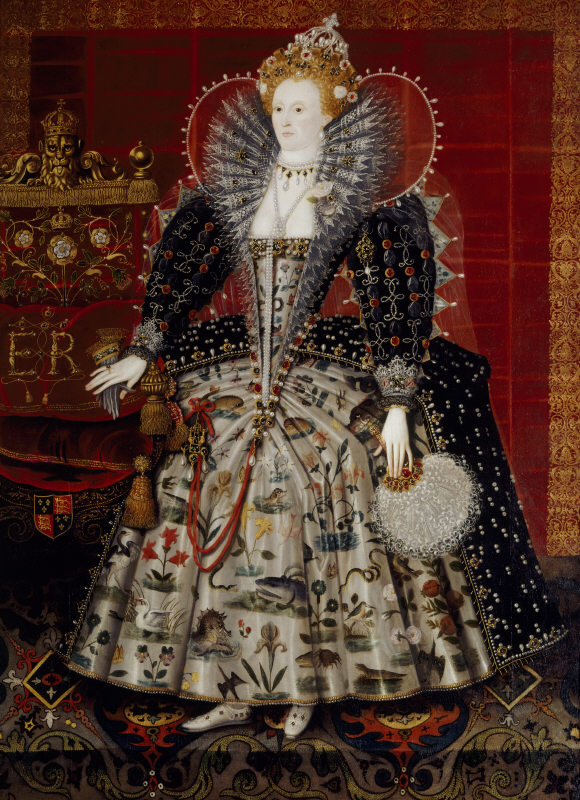 Aside from the tapestry obsession that I was quickly developing at Hardwick, one particular highlight of the day was the paper delivered by Charlotte Bolland on behalf of Tarnya Cooper, on the Hardwick portrait of Elizabeth I in which she wears a dress decorated with sea monsters (above). As well as the fascinating discussion into the source of this image (perhaps a miniature by Hilliard) and the textiles depicted (the dress was probably a real outfit worn by the Queen) apparently it was commissioned along with a number of other portraits at the time and therefore probably conceived as part of the whole decorative scheme of the house. This idea was taken further with a question and discussion following this paper, intimating that this ‘portrait’ was not necessarily intended to reflect or imitate life as such, but in fact had more in common with the decorative arts.

Of course, the portrait represents Queen Elizabeth I and its presence in the house denoted Bess’s allegiance to her; however, the concept of it also being part of the decorative scheme really made sense to me. Despite not seeing the portrait hung on the wall over the Gideon tapestries in the Long Gallery in its original intended position, but instead displayed in the High Great Chamber, the visual statement was still the same. The surface detail of the image and the fantastical design of the dress all added to the carefully orchestrated ‘wow’ factor of these reception rooms. Having experienced the ascent through the Great Hall and up the staircases into the High Great Chamber, just as Bess’s guests would have done, I was acutely aware of the impact that the decorative scheme would have had upon their senses.

Many of these tapestries are currently undergoing a programme of conservation, with one beautifully displayed tapestry of Penelope with Perseverance and Patience highlighted to show the work that has already been done. You can also get a small glimpse of the original splendour of the Gideon tapestries here:

Even in their current faded condition, the tapestries and the painted plaster frieze juxtaposed against each other and the magnificent marble fireplace create an astonishing display of colour, pattern and texture. Imagine how they must have looked when experienced in their original state in full colour, add a few carefully commissioned and beautifully patterned portraits for good measure and the decorative scheme is complete. It will be intriguing to see if the portraits continue to hang on these tapestries once the conservation programme is complete. 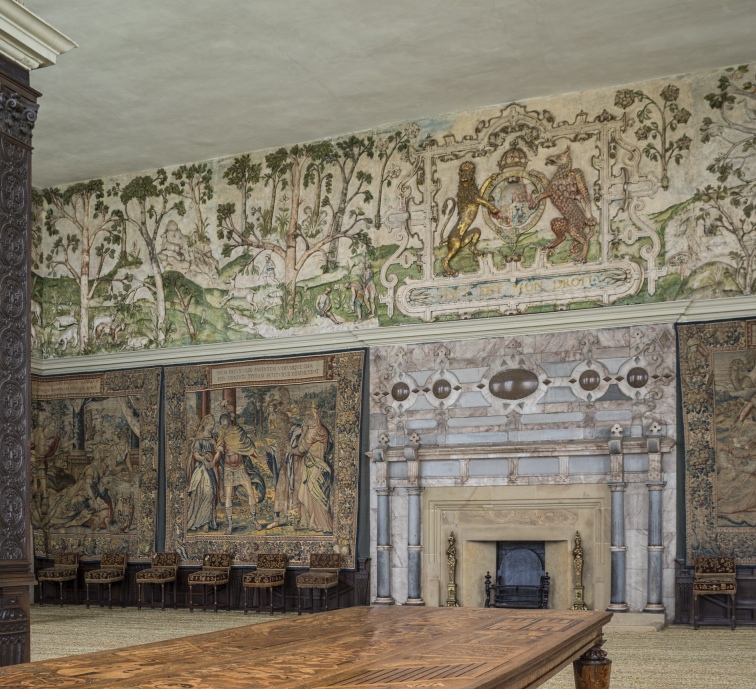 Looking across the Eglantine Table towards the fireplace in the High Great Chamber at Hardwick Hall, Derbyshire © National Trust Images/Andreas von Einsiedel

I am so used to admiring and displaying 16th and 17th century portraits in what I would now frankly describe as the sparse environment of a traditional gallery, that I never really considered their marked dislocation from the original context. Obviously I realise that portraits were more often than not meant for more domestic interiors, if indeed any room in these great houses could be deemed ‘domestic’, but just seeing the Hardwick portrait of Elizabeth I in its correct context really brought this home to me. In its intended setting it so ostentatiously has more in common with the decorative arts than the visual arts, and this has completely changed the way I will look at and interpret 16th and 17th century portraiture from now on.

Anyone got any spare tapestries they want to lend me?