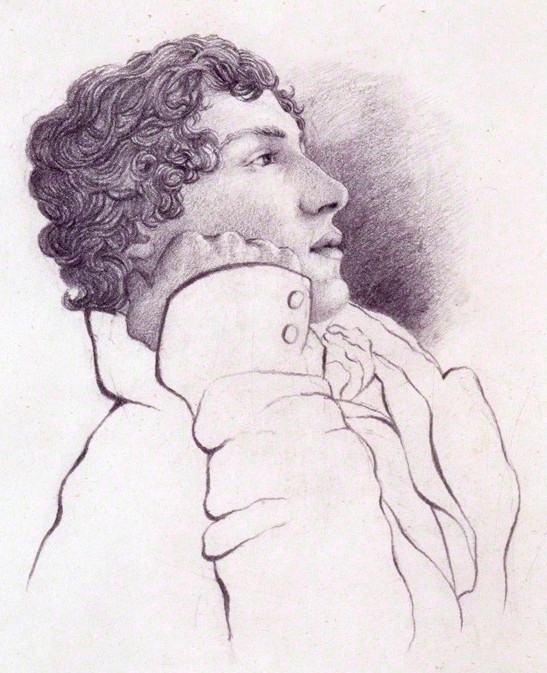 This event took place at the National Portrait Gallery on 19 October 2010. Below are synopses of some of the presentations, and relevant handouts. 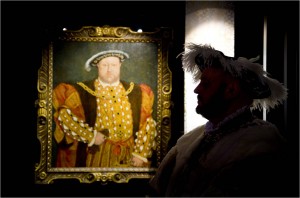 In 2009, Historic Royal Palaces re-presented the Tudor state apartments at Hampton Court. We used portraiture from the Royal Collection to help tell the story of Henry VIII’s marriage to Kateryn Parr at the palace in 1543. For three months, we also hosted a temporary exhibition entitled Henry’s Women, which attempted to reunite portraits of Henry’s 6 wives and 2 daughters, and to display them together at Hampton Court for the first time.

Our objectives were to maximise visitor numbers and media coverage during this special anniversary year (the 500th anniversary of Henry VIII’s accession to the throne) and to breathe new life into the Tudor parts of Hampton Court which, we thought, merited a new interpretative approach. Historically, curators have taken ‘what survives’ as the starting point for any room presentation at the palace; visitors have been disappointed, as a consequence, as they had not discovered Henry’s private apartments (which are, mostly, destroyed) nor learnt about his relationships with his wives. Could we impose a more exciting narrative onto the surviving rooms and collections at Hampton Court without obscuring the authenticity of what remained, and without lying ?

Visitors, we learnt, expect a lot from their Tudor portraiture. They expect portraits of Henry’s wives, for example, to tell them not only “what they really looked like” but also “what they were really like as people” and in particular “what they thought of Henry”. Our challenge was to use portraits to tell a coherent story – of Kateryn Parr encountering her Tudor relations (and Henry’s previous wives) on her arrival at the palace in 1543, without making things up.

We did this (we hope) by: being honest about the continuing arguments and uncertainty over the identity of some of the portraits; presenting unusual and little-known portraits that challenged visitors’ preconceptions about Henry’s wives and Henry himself, and explaining what Tudor portraits were for, how they were reproduced, and to what extent they could be used to explore questions of likeness and identity.

We learnt that visitors can be presented both with an immersive storyline that plunges them back in to the courtly world of 1543, supported by live interpretation and replicated furnishings, and with real authentic artworks from the past. In fact, increasingly, they demand both sorts of experience. A trip to an historic location invites ‘time travel’ but would be incomplete without an encounter with real historic objects. 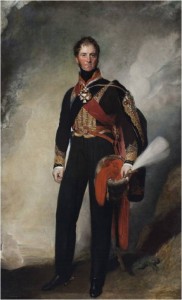 Plas Newydd means New Place or New Mansion. It is situated on the island of Anglesey on the edge of the Menai Straits. From about 1470 it belonged to the powerful Griffith family of Penrhyn, it then descended through marriage, to the Bagenal, Bayly  and Paget families (the Paget family home was Beaudesert in Staffordshire).The house, gardens and estate are set in a stunning landscape – the water of the Menai Straits and directly opposite  the sweeping contours of Snowdonia.

There is a long tradition of family portraiture at Plas Newydd, both formal and informal. The house is crammed with paintings (mainly because the family moved from Beaudesert in 20th century) and made Plas Newydd their main home. Visitors to Plas Newydd are overwhelmed by the paintings and portraiture throughout the house, but it is difficult to connect with portraits which silently stare down from the walls. Whenever I visit or work at Plas Newydd I am intrigued by the stories behind each painting – who were these people, what sort of lives did they lead: were they happy, successful, and loved?  What were their achievements what was their place in society, their family? Why were each of the portraits created? What were they wearing, their pose and style of the painting? What do these paintings tell us about the social and historical context in which they were painted?

The UBP placement  has enabled me to look at the wider context of the Plas Newydd portraiture and to begin to make sense of and to try and interpret these paintings for visitors. The portraits at Plas Newydd represent a family which is diverse and interesting. The sample of portraits I chose to investigate show individual achievements and personalities, as well as a fascinating glimpse into the social and artistic context to which they belong. As with any portrait, it is possible to see formal conventions, the statements which both the sitter and the painter wish to convey, as well as style of dress and artistic technique. It is also possible to detect the greater influences upon each portrait. 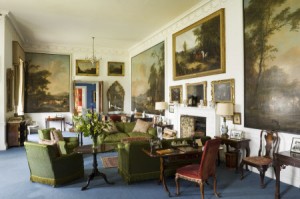 The Saloon at Plas Newydd, on the Isle of Anglesey, Wales. The plan of the room is from 1751 but was entirely redecorated in the 1930s when the four large pastoral paintings by Balthasar Paul Ommeganck were introduced © National Trust Images/Andreas von Einsiedel

The current phenomenon of Facebook demonstrates our continuing fascination with other peoples’ lives and in the way we project an image of ourselves to the world. The profile picture is a representation of how we wish to be perceived (whether through humour, happy families, hectic social life or relationships). Even in an age when everything can be communicated through the written word, image is everything. Although this may be a passing phenomenon and does not touch all people in contemporary society, it is nonetheless as representative of modern imagery in the same way that the Tudor portraits communicated status, the Regency portrait celebrity, the glamour of the Edwardian portrait or the informality of portraits from the 1920s and 1930s.

Even more fascinating are the stories behind not only the people in the paintings at Plas Newydd, but also of the painters themselves. Some are on a domestic scale, which we can relate to personally, whilst others are tales of achievements, power, wealth, intrigue and bravery as well as romance and tragedy.

Both artist and sitter evoke the style and social context of the era in which they were created: the glamorous paintings and lifestyle of Thomas Lawrence; cool restrained, mannered, intelligence of George Romney; the exotic aestheticism of Jacques Emile Blanche, through to the warm and informal portraits of Rex Whistler. These paintings all have the same subject matter, people from a single family associated with Plas Newydd. However, through differences in style, technique and composition they are a fascinating glimpse into the past and through closer examination and interpretation they can bring Plas Newydd alive in a vibrant and meaningful way, allowing the visitor to step into the paintings and explore another world. 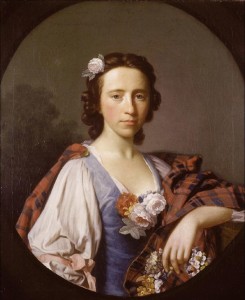 Like other early libraries in Europe, the Bodleian Library in Oxford acquired not only printed books and manuscripts but a range of objects of curiosity which provided evidence for understanding the world which complemented the scholarly value of the books. Following the completion of two ranges of the Bodleian Quadrangle in 1619, followed by a third in 1640, the library acquired a large U-shaped book store for which it had no immediate need. In this space, now occupied by the Upper Reading Room, a small museum developed round a number of gifts of coins, medals and curiosities. These were at first housed in the Curators’ meeting room but were moved to a more central location in the tower by the mid century. With the development of a separate museum in the Anatomy Theatre in the floor below, objects of curiosity tended to be collected there leaving the gallery above to evolve into a gallery of portraits.

The earliest portraits were of sitters linked to the foundation of the library. Other portraits of notable contemporaries linked to the University followed in the 1640s and 1650s but it was only in the Restoration period that it became a fully-fledged museum of portraits. The addition of portraits of College Founders added a historical dimension. These were followed by portraits of scholars, monarchs, soldiers, poets and painters from all periods. The main interest lay in the sitter and not the artist and many were of little interest as works of art. By the end of the eighteenth century, however, it included the work of many notable portrait painters.

In the mid-eighteenth century, the collection expanded to include other types of paintings – landscapes, religious images, genre pictures and allegories – all of which were transferred to the new University Galleries built between 1839 and 1846 on Beaumont Street. Many portraits were also transferred but despite these losses, the Picture Gallery flourished in the later decades with major portraits coming into the collection. It ended, not because it had diminished in interest and not because it did not have a role to play as Britain’s oldest public gallery of portraits, but because the librarians needed the space for books and readers. In 1907, a large part of the gallery was converted into reading space but it did not finally disappear until 1950 when the Upper Reading Room was set out in its present manner.