You are here: Home Case Studies Portrait of a Lady: The Life and Passions of Lady Barber, 2012-13 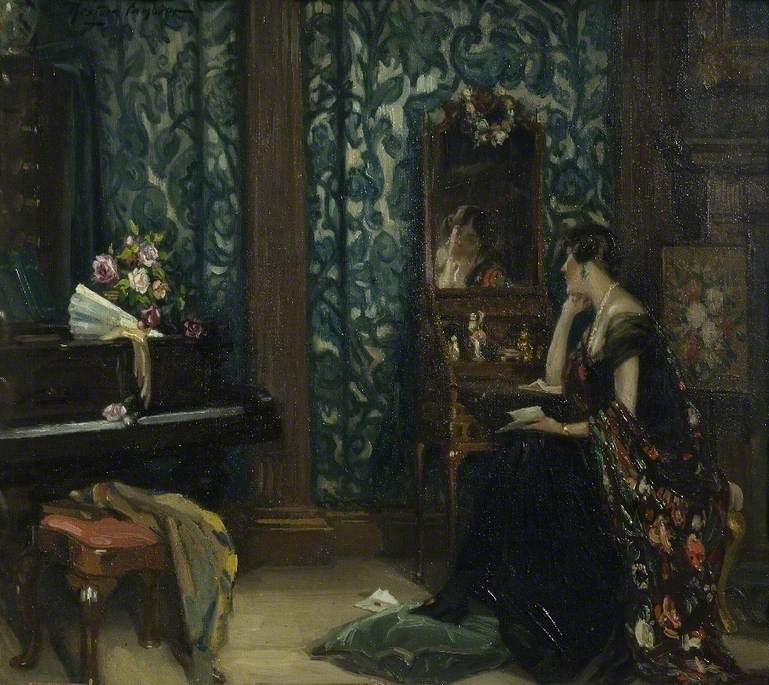 13 December 2012 marked the 80th anniversary of Lady Barber signing the trust deed to found the Barber Institute of Fine Arts. Portrait of a Lady is the first exhibition in series of related shows and loans that commemorate the signing. It lays the foundation for the celebratory events by examining the lives of Sir Henry and Lady Barber, providing insight to their personalities and showcasing their interests and activities that culminated in the founding of the institute. The opening of the exhibition was also the launch date of the coinciding publication, The Barber Institute of Fine Arts: Foundations of a Collection (Scala).

Visitors to the Barber Institute have for years been greeted by a painting of Dame Martha Constance Hattie Barber (née Onions) and her dogs, pictured in the garden of the Barbers’ country home, Culham Court. But the portraits in the exhibition embody a decidedly different style. It is no secret that they are of questionable taste, driven by the narcissism and ambition of the sitter after she and her husband rose to the upper echelons of society after their marriage in 1893. Although the paintings were bequeathed to the Institute after Lady Barber’s death in 1933, they sat in storage away from the public eye for years. In preparation for their display, the portraits were treated by painting conservator Ruth Bubb.

These pieces are visual evidence of Lady Barber’s interests in collecting art, playing piano, gardening, dogs, and above all, herself. She was the patron to an eager Belgian painter, Nestor Cambier, who executed more than 25 likenesses of her. Those on display in Portrait of a Lady highlight the range of poses, backgrounds, props, and dress in the entire series. Gillian Crumpton and Alison Phillips from the Costume Project at the Ironbridge Gorge Museum Trust reconstructed one of the Lady Barber’s dresses for the exhibition and will speak about her costumes in a talk on 5 February 2013.

Alongside the portraits, the majority of Sir Henry and Lady Barber’s personal art collection was bequeathed to the Barber Institute. It includes a set of outstanding textiles. A brilliant William and Mary armorial piece and one of four bright blue bed hangings were restored by Anne van den Berg in 2012 and hang alongside the portraits; the latter textile is pictured in an interior scene by Cambier. The Barbers also owned a ‘Sheldon’ cushion cover, found at Chastleton House in 1919 and on long-term loan to them, but returned to the Barber Institute for Portrait of a Lady.

Delicate lace owned by the Barbers is also on display. Jamie Mulherron, textile research assistant, discovered that the Barber lace is one of the finest collections outside London. The medium is further explored with Jacqueline Lawrence’s Inspired by Lace, running alongside Portrait of a Lady. Mulherron will also deliver talks on the lace (19 February 2013) and William and Mary armorial tapestry (11 January 2013).

The presence of Lady Barber’s husband Sir Henry is not immediately noticeable in the exhibition, despite his financial backing of the portraits, their art collection, and the Institute. However a caricature by the artist SEM and display of photographs tell of Sir Henry’s occupations with equestrianism and hunting. He also maintained links with the law department at the University of Birmingham, which he established in 1923 with a £20,000 donation.

Preparatory work for Portrait of a Lady was funded by a bursary from UBP in 2011-12, which facilitated archival research in Birmingham, London, Brussels, in addition to visiting Culham Court. While the exhibition is primarily formed by the paintings of the Barber Institute’s female founder, it is rounded out by photographs, lace, tapestry, and costume. The show culminates with a portrait of Lady Barber decked in academic robes, painted when she received an honourary LL.M. degree to mark her and her husband’s involvement with the University of Birmingham – a fitting conclusion of their art collecting pursuits and riches that would found the Barber Institute of Fine Arts.